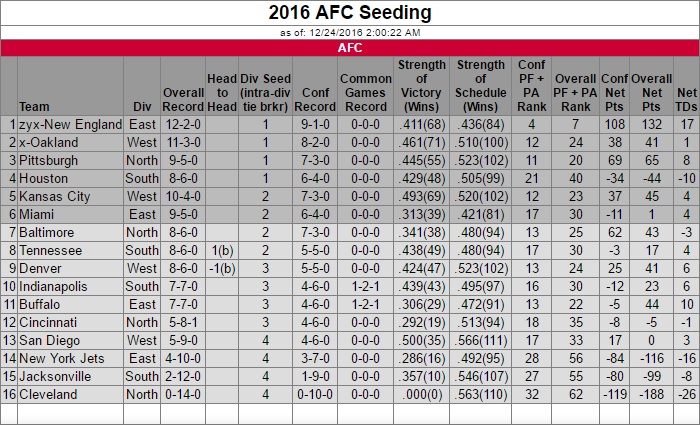 With two games left on their 2016 regular season schedule, the Pittsburgh Steelers can still possibly finish as high as the No. 2 or No. 3 seed in the AFC if they win out. A loss Sunday night to the Baltimore Ravens would of course be very disappointing and hurt those chances. So, do you have to scoreboard-watch on this Week 16 weekend? No, not really, but if choose to, below are four games worth keeping your eye on when it comes to the AFC playoff race and scenarios.

Miami Dolphins (9-5) at Buffalo Bills (7-7) – While they are faint, the Bills still have a chance to make the playoffs as a Wild Card team. They’ll need a ton of help and it starts with them beating the Dolphins on Saturday at home and then sitting back and hoping they have something to play for in Week 17. If you are a Steelers fan, you want the Bills to beat the Dolphins just in case the Steelers need some tiebreaker help in Week 17. Remember, the Dolphins own the head-to-head tiebreaker over the Steelers thanks to them beating Pittsburgh earlier in the season.

Indianapolis Colts (7-7) at Oakland Raiders (11-3) – If the Raiders beat the Colts on Saturday the Steelers will no longer have a shot at getting the No. 2 seed in the AFC. The Colts really aren’t any kind of a threat to the Steelers at this point so pull for them to upset the Raiders on the road in this Saturday afternoon game. The Colts need a win and a lot of help to make the playoffs, but at least they have something to play for in this game.

Cincinnati Bengals (5-8-1) at Houston Texans (8-6) – As far as the big picture goes, this game really doesn’t mean much to the Steelers, but with that said, the Texans are currently the No. 4 seed in the AFC and one spot behind Pittsburgh. Just in case the Steelers need some tiebreaker or seeding help, go ahead and pull for the Bengals to upset the Texans in this game that will be played Saturday night in Houston. Houston has a 6-4 conference record entering this game.

Denver Broncos (8-6) at Kansas City Chiefs (10-4) – If the Steelers are going to ultimately get the No. 2 seed in the AFC they will need the Chiefs to lose at least one of their final two games in addition to the Raiders losing both of theirs. While this game might not hold much value come Sunday night if the Raiders beat the Colts, you’ll still likely want to pull for the Broncos in this game nonetheless.