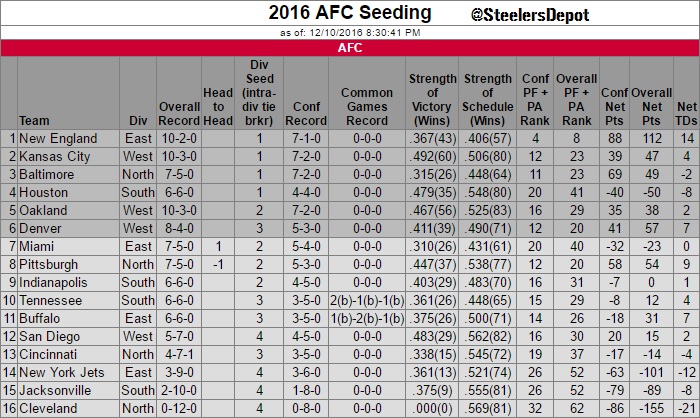 Entering Sunday, the Pittsburgh Steelers remain the No. 8 seed in the AFC. However, a Steelers win Sunday over the Buffalo Bills could ultimately result in them entering Week 15 as the No. 3 seed in the conference depending on how a few other games play out. Below are four key-games that Steelers fans should keep a close eye on these next few days when it comes to the AFC.

Houston Texans (6-6) at Indianapolis Colts (6-6) – In the grand scheme of things it probably doesn’t matter which team wins this AFC South game when it comes to the Steelers. The Steelers beat the Colts a few weeks ago, so they’ll own the head-to-head tiebreakers should it ultimately come down to that. Personally, I want the Texans to win this game in hopes that it ultimately prevents the Colts from making the playoffs.

Arizona Cardinals (5-6-1) at Miami Dolphins (7-5) – This game isn’t hard to figure out. The Steelers lost earlier in the season to the Dolphins and that could ultimately come into play should both teams wind up making the playoffs as Wild Card teams. The Dolphins enter this game as the No. 7 seed in the AFC so hopefully the Cardinals hand them their sixth loss of the season on Sunday.

Denver Broncos (8-4) and Tennessee Titans (6-6) – Being as the Broncos enter this game with the better record of the two teams, it would be nice to see them lose Sunday on the road. The Titans really need to win this game to keep pace in the AFC South division. The good news is that one of these two AFC teams still in playoff contention is likely to lose.

Baltimore Ravens (7-5) at New England Patriots (10-2) – This is one of the rare times Steelers fans will be pulling hard for the Patriots and especially if Pittsburgh slips up and loses to the Bills on Sunday. The Steelers can take over the AFC North lead as well as the No. 3 seed in the AFC in Week 14 with a win on Sunday combined with a Ravens loss to the Patriots Monday night.