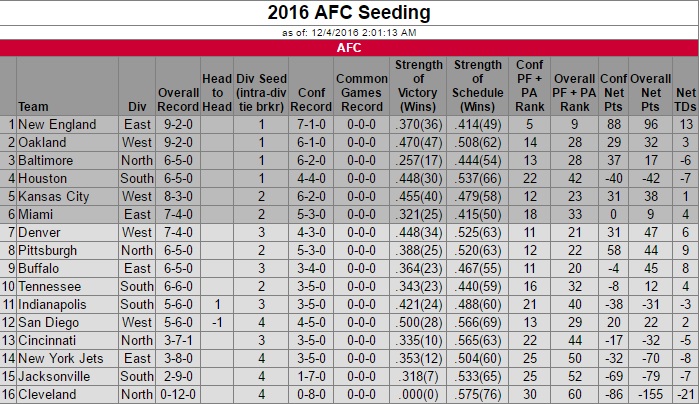 Entering Sunday, the Pittsburgh Steelers are currently the No. 8 seed in the AFC. However, a Steelers win Sunday over the New York Giants could result in them entering Week 14 as the No. 3 seed in the conference depending on how a few other Sunday games play out. Below are five key-games that Steelers fans should keep a close eye on Sunday when it comes to the AFC.

Miami Dolphins (7-4) at Baltimore Ravens (6-5) – The good news when it comes to this game is that one of these two playoff-contending teams is likely to lose. When it comes to the Steelers, they’re of course hoping it will be the Ravens. The Baltimore defense has played extremely well this season and I fully expect they’ll be able to keep the Dolphins offense from lighting up the scoreboard in this contest. On the other hand, you have to wonder if the Ravens offense will be able to score touchdowns in this game as well.

Kansas City Chiefs (8-3) at Atlanta Falcons (7-4) – The Chiefs got a big win against the Denver Broncos last week and Sunday we’ll see if their defense is able to limit the Atlanta Falcons potent offense. A Chiefs road win in Atlanta would be huge and especially win it comes to the AFC West division. A loss, however, combined with a Steelers win over the Giants on Sunday, could wind up being big at the end of the season when it comes to home field advantage in the playoffs. The Chiefs don’t have an easy schedule the rest of the way and thus a few losses are certainly possible. Let’s hope they leave Atlanta Sunday very disappointed.

Buffalo Bills (6-5) at Oakland Raiders (9-2) – The Raiders are flying high right now on their current five-game winning streak. The Bills, on the other hand, need a win Sunday at home in order to help their Wild Card chances. Being as the Steelers easiest path to the playoffs includes them winning their own division, it would probably be wise to root for a Raiders loss on Sunday. With that said, much like the game between the Ravens and the Dolphins, at least one of these two teams is likely to come away with a loss. Keep in mind that the Bills will host the Steelers next weekend as well so Pittsburgh can take care of their own business when it comes to Buffalo in Week 14.

Houston Texans (6-5) at Green Bay Packers (5-6) – the Texans haven’t played extremely well the last two weeks but with that said, they enter Week 13 as the AFC South leaders. A Texans loss Sunday could wind up being big and being as they are playing the Packers on Sunday, I don’t need to tell you who to root for as we always root for AFC team losses when they play out of conference.

Denver Broncos (7-4) at Jacksonville Jaguars (2-9) – Not only did the Broncos lose last week to the Chiefs, they also lost their starting quarterback to an injury. While it doesn’t appear to be a daunting task, the Broncos will have to beat the floundering Jaguars on the road with rookie quarterback Paxton Lynch under center. A Broncos loss combined with a Steelers win would put Denver behind Pittsburgh when it comes to overall record and tiebreakers. The Broncos, like the Chiefs, have a tough final four games with three of those being against teams in their own division. Pull hard for a Jaguars upset as you never know what impact that might have later when it comes to playoff seeding.