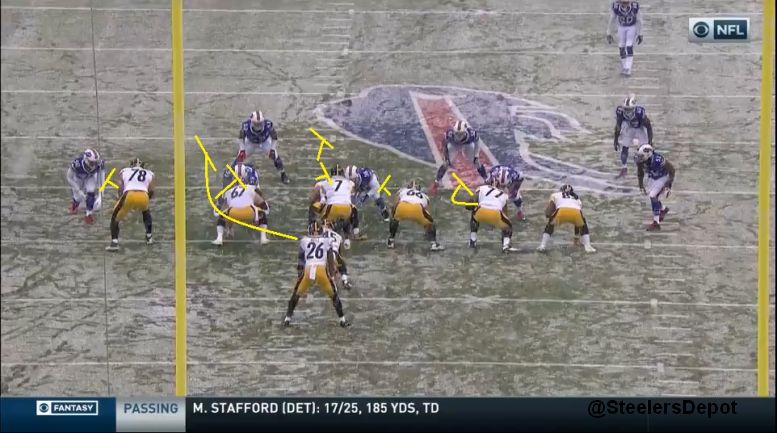 Run the football to death. Play Cover 2 defense. That’s were some of the basic tenets of the 1970s Pittsburgh Steelers’ dynasty. Franco and Rocky. Mel Blount a terror in the secondary.

The names have changed and I’m not saying the Steelers are poised for another such dynasty but yesterday, for a moment, you could hardly tell the difference.

On Le’Veon Bell’s second touchdown, the Steelers are running a straight Lead play. Heavy personnel, Bell in the backfield with fullback Roosevelt Nix.

Nix is responsible for the strong side inside linebacker while Maurkce Pouncey and B.J. Finney are combo blocking the three tech – Pouncey keeps him to the outside and then climbs to the weakside ILB. 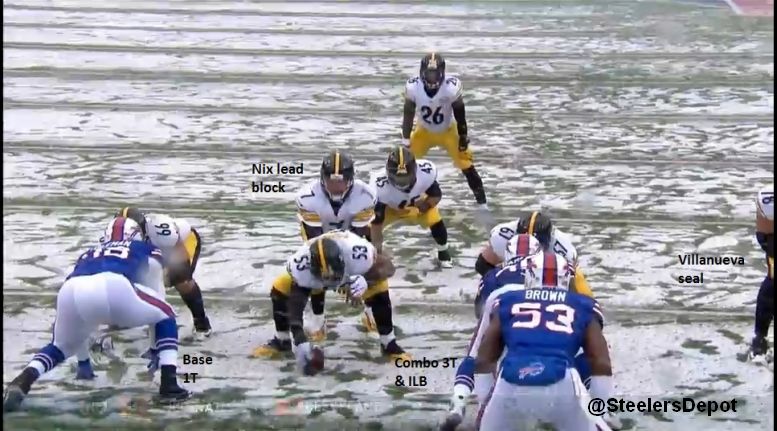 With the Bills’ one tech doing a nice job at the POA and the strongside linebacker coming down into the gap, Bell decides to bounce the run. Normally isn’t a read here but Bell is that good and has that level of vision. He bounces to the outside hip of Finney, who does a tremendous job to finish the run and plant Marcell Dareus – a tremendous player – into the ground. Total pancake. 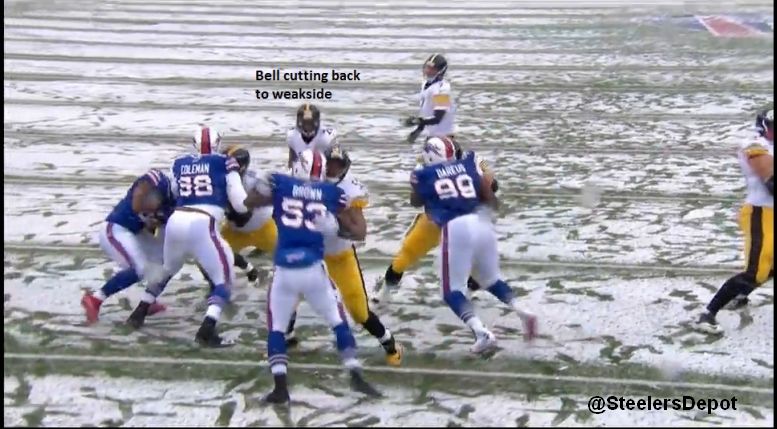 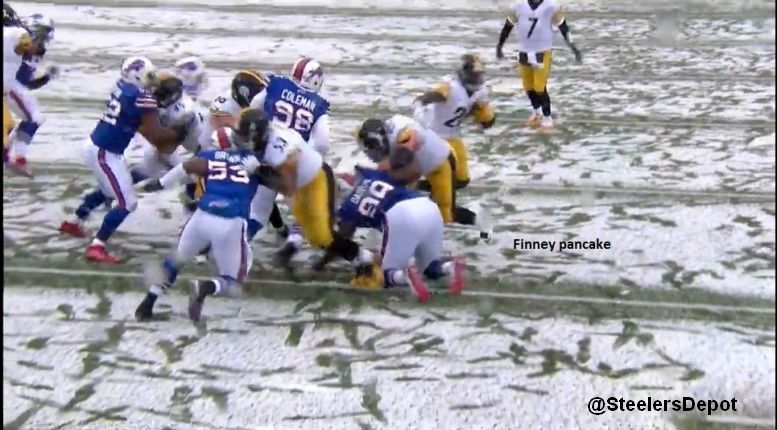 Villanueva is sealing off the backside OLB too, setting his hips, and there is a tractor trailer sized hole for Bell.

Let’s look at the whole thing.

This was Bell’s longest run of the game, longest run by the Steelers in forever, a 24 yard gain. Similar concept. Lead play run to the weakside, away from the tight end.

Blocking assignments for this one:

Finney and Nix have the key blocks. Finney has to down block the tackle who is head up with him and NIx has to pave the way through. Has to create space for Bell to run through. And both do a tremendous job. Finney secures his block and Nix takes out the linebacker. With Villanueva setting his hips and sealing the playside linebacker, there’s a big hole. 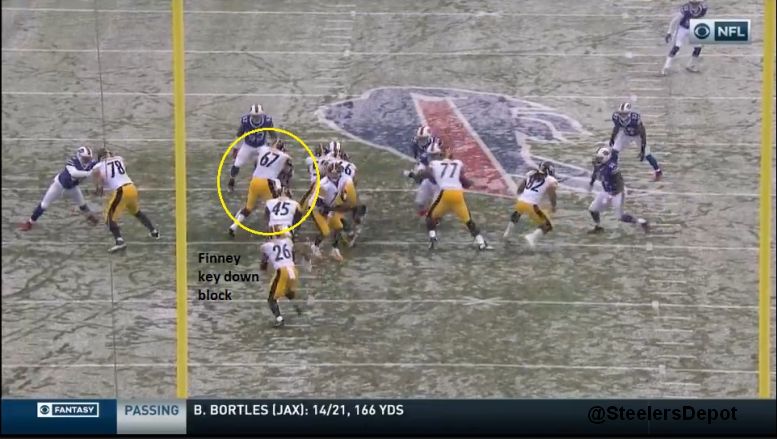 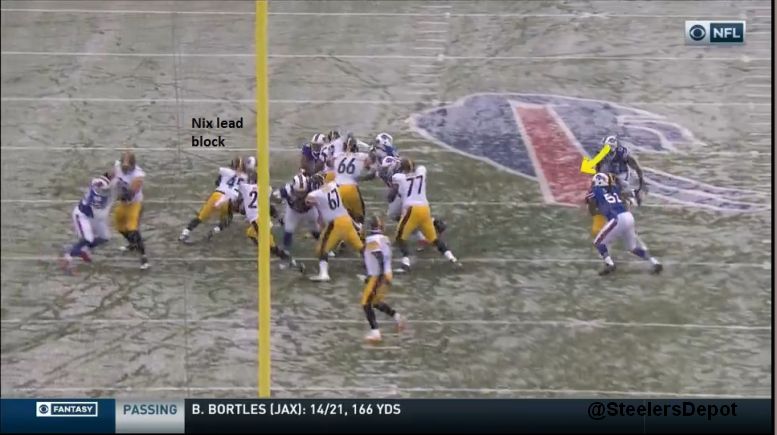 Downfield, give credit to Cobi Hamilton for stalk blocking the cornerback. Sometimes, the difference between a good run and a great one is downfield blocking. And Hamilton shows it. 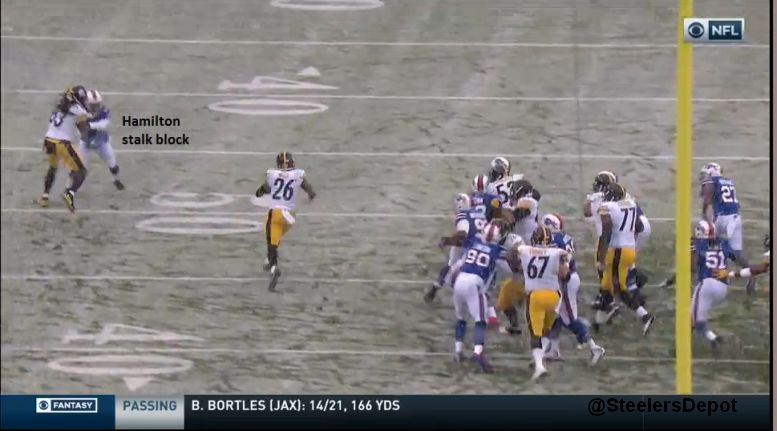 And then, the Steelers’ final touchdown. Classic Counter Trey. Like they ran with Gerry Mullins, Alan Faneca, and now David DeCastro. It’s a Steelers’ staple and this might be the easiest run they’ll ever get off it.

We never get a great end zone angle to show things, unfortunately, but the Bills hurt themselves here. Their force player looks like the cornerback. To the frontside, you’re getting down blocks from the tight end and tackles with the backside guard and fullback pulling across. 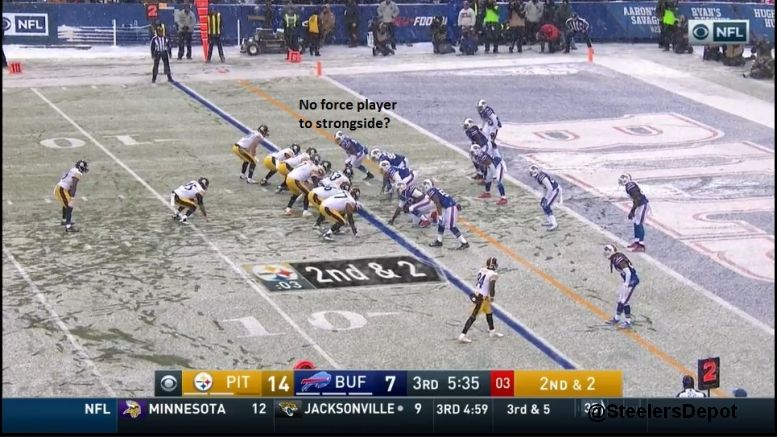 Usually get a kickout block but with no force player, DeCastro is able to work upfield to the linebacker. All that’s left is Nix, Bell, and the cornerback. I think you know who won here. 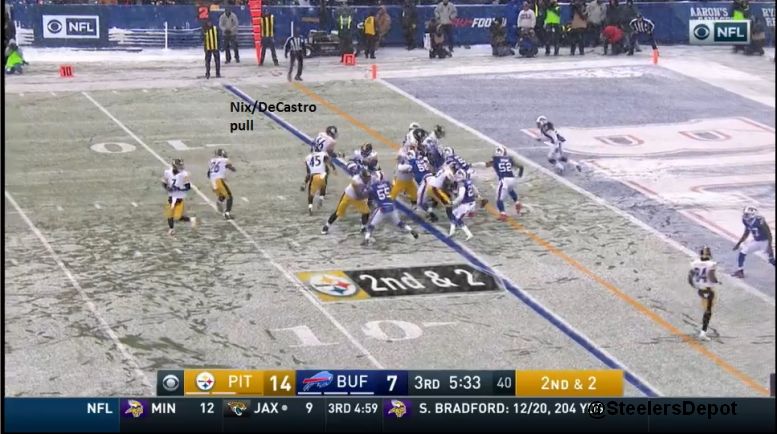 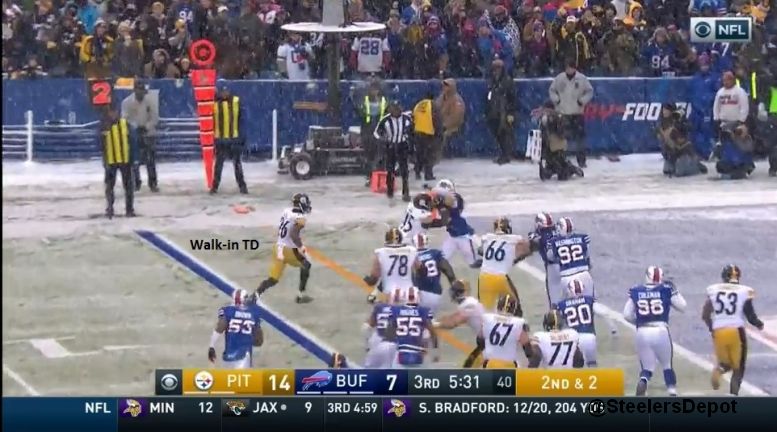 And your look at it.

Finally, a look at the defense. Artie Burns get the Steelers’ offense back on the field immediately after Ben Roethlisberger threw a costly pick. It came from their Cover 2 shell, created by Steelers’ defensive coordinator Bud Carson in the 1970s. Nothing fancy and you probably know the scheme.

Two deep shell, a middle seam defender, with the cornerbacks playing the flats and sinking if there’s nothing there. 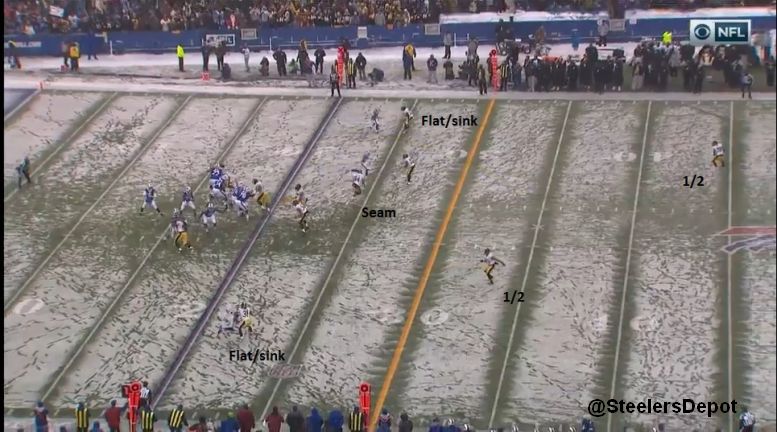 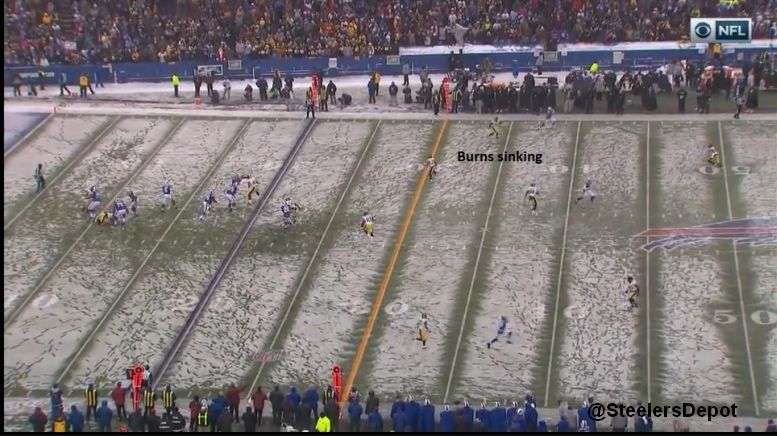 That’s what Burns does. It’s a heady play by the rookie. After #1 goes vertical, he gets his eyes to #2 to look for any out-breaking route. 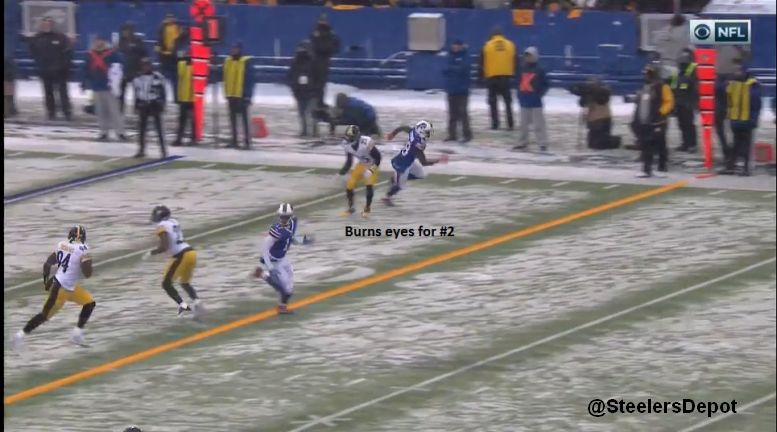 With #2 running vertical too, Burns gets depth on #1 and gets his eyes on the quarterback. He’s sinking, reading, and squeezing any vertical shot. When Tyrod Taylor tries to force the throw down the sideline, Burns is right there to pick it off. 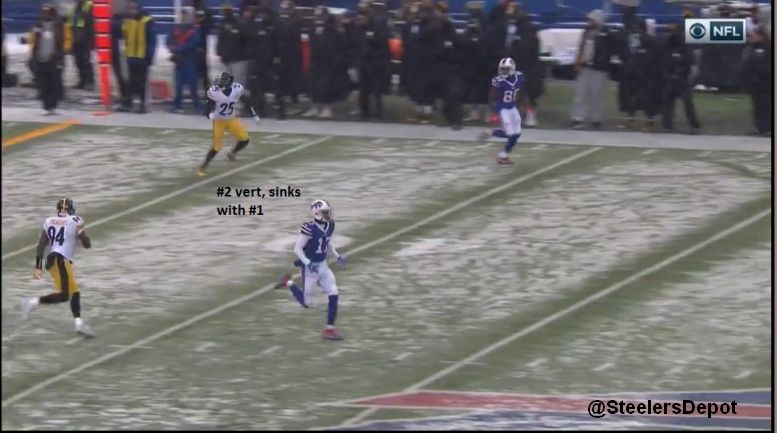 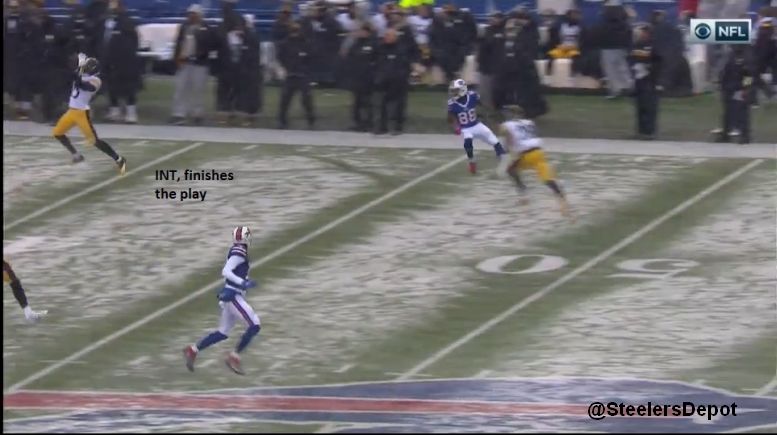 That is relatively easy on the scale of cornerback play but it’s doing all the little things from a cornerback; playing with his eyes, playing with technique, and finishing the play.