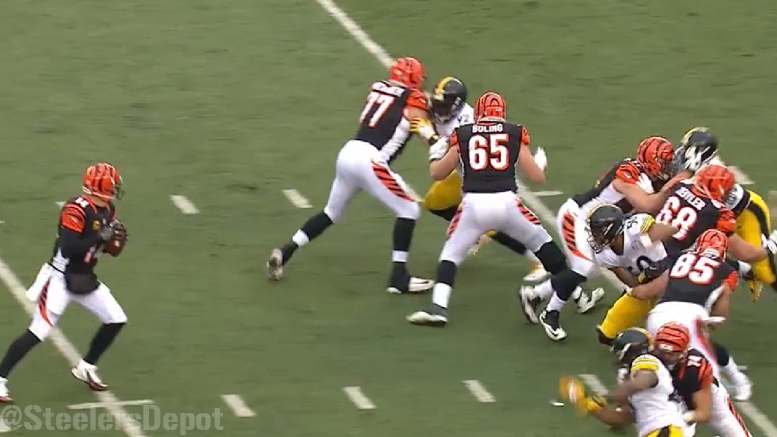 You can probably make the case that third-year Pittsburgh Steelers inside linebacker Ryan Shazier is having his best season yet. Though he has miss two games and parts of others, while also playing through a knee injury in the early parts of the season that may have limited him, he is proving to be a productive and impactful player.

Many Steelers fans believe that he should be in the Pro Bowl this year, though the time that he has missed really hurt his opportunities to pad his numbers. In spite of the fact that Lawrence Timmons saw some time early in the season being taken off the field in the dime defense, he has played 799 snaps to Shazier’s 618.

That is why Timmons has a healthy lead in the tackle department. Shazier has 69 tackles, but he also has a lot of boxes checked in the splash play column. Not only does he have an interception—and seven passes defensed—he also has three and a half sacks, as well as a trio of forced fumbles.

Those are some solid numbers all around, and we saw some of how that stat line came to be on Sunday against the Bengals. He has made real strides since even last year in terms of coming off the edge, for example. Early Sunday, he did an excellent job of beating Cincinnati’s right tackle inside to force the quarterback to flush out of the pocket and throw the ball away.

Late in the first half, he had a chance—albeit a slim one—at getting his second interception of the year when he was playing the middle of the field and tracking the quarterback. When the pass came over the middle looking for the tight end, Shazier made an athletic stab at it to bat it down, and even had an opportunity to try to reel it in, but to no avail.

Of course, he does have some drawbacks. He can still be taken out of the run sometimes when he is not kept clean to the line. On the first play of the second half, Shazier got buried and thrown to the ground by the right guard working at the second level.

Then again, he did come back at the end of that drive to finish it off with a sack for a loss of 11 yards, making quick work of the tight end in pass protection, so you take the pros with the cons.

On the first Bengals play of the fourth quarter, Shazier showed off his sideline-to-sideline quickness and diagnostic capabilities, picking up a running back screen off motion and beating the edge blocker to make the tackle for no gain.

And on the very next play, he came back and showed that same guard who threw him to the ground what he can do with his speed, showing lateral quickness to get around him and still get into the backfield to make a tackle for a loss.

Yes, Shazier does some truly exceptional things on the football field when he has a mind to do it, and a body that lets him. What a wonder what it would be to see what he can do with a fully healthy season.