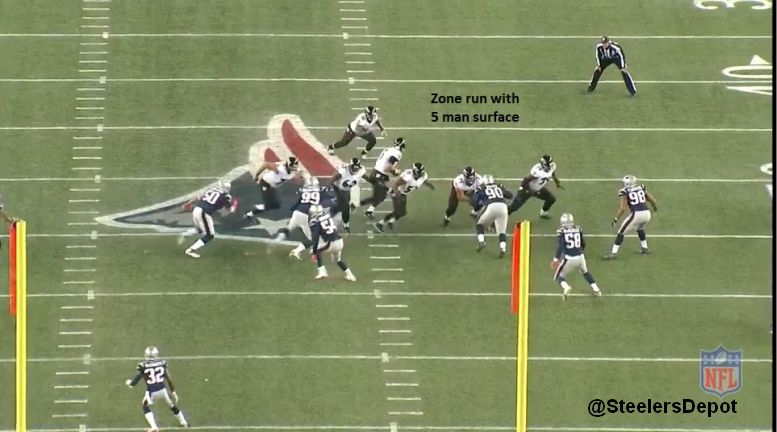 The Ravens’ run game is a bit stronger than it was in the first meeting. There’s more talent leading the way though the team is struggling to find a defined singular back, switching between Terrance West and Kenneth Dixon.

On the year, West is averaging 4.1 YPC and Dixon 4.3. Not great but certainly better. But as a team, in three of their last five games, they’ve averaged 5+ YPC. Compare that to their first nine when they did so just twice.

It makes their overall yards per attempt misleading, which still sets at 3.9, tied for 23rd worst in the league.

The line is strong and a lot healthier too. Their projected five.

Since Week 10, they haven’t run the football much at all. Only two teams have passed the football more than the Ravens since Week 10. It’s weird because their run game is getting stronger but they’re content with letting Joe Flacco sling the football all day long.

When they do run the football, they’ve gotten back to some of their core, zone principles, with a little bit of power mixed in. Will get inside zone out of a one and two back set, the latter with FB Kyle Juszczyk one of my favorite players in the league. He does it all. Catch, block, stay in as the third down back. Swiss Army knife. 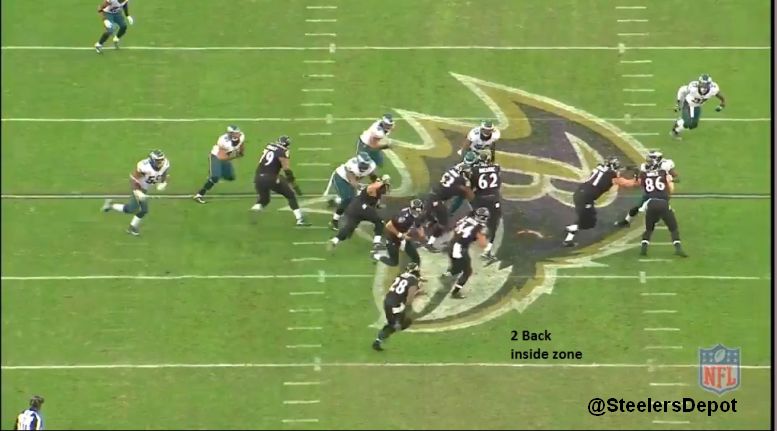 Even in those heavier looks, the Ravens aren’t afraid to spread things out and lighten the box. 21 personnel but a five man surface on this run.

They’ll also run away from the strength of the formation, too. Try to play the numbers game to jumpstart the ground game.

It’s a surprisingly efficient offense for as much as we think about them in the sense of a feast/famine attack, looking to hit the deep ball all game.

The Ravens, of course led by Flacco, are tied for the 11th best completion percentage but are tied for the sixth lowest  yards per attempt, coming in at just 6.5. Flacco’s thrown 19 touchdowns to 13 picks this season.

Weapons are similar. Mike Wallace and Breshad Perriman are the vertical threat, each averaging over 15 yards per grab. Steve Smith’s number is much more modest but he’s a big-play threat too while Dennis Pitta continues his resurgent season.

The backs are a heavy part of the offense and certainly a driving reason why the YPA is so low. Over the past three weeks, Ravens’ running backs have accounted for 20 of the 90 receptions, or a little over 22%. It’s equally shared between West, Dixon, and Juscszyk.

But to be fair, it’s not all checkdowns. Some of these receptions are coming on designed plays for the back. They love to flood part of the defense and then send the back on a wheel route behind it. Like here.

The two most successful ones I saw came on third and medium. One on 3rd and 4, another on 3rd and 6. So be aware of that.

You’ll also notice above that the Ravens are FIB, meaning the formation is in the boundary. Three receivers to the boundary site. That’s not too common, teams usually preferring to put the strength in the field and have more space to work with. Definitely creates some challenges for the defense. On pass plays, you get a lot of spacing concepts and ones that look to gain leverage (digs, over routes).

Also have to realize the backside X receiver is often aligned outside the numbers to the field, in a very wide split, that can create an island for the corner. Most often get Mike Wallace there, their best deep threat.

So you, as a defense, either have to leave just the corner on him or cheat the safety away to give help, stressing your coverage flexibility, ability to disguise, and some of his run fill responsibilities too (have to have width and depth). 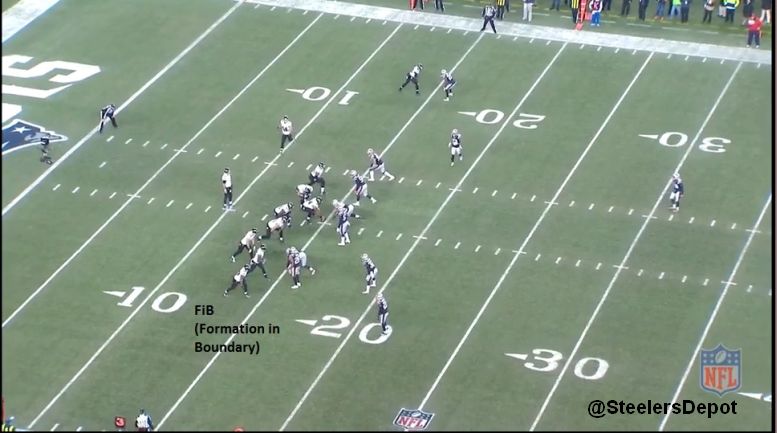 They’ll run offshoots of tare concepts with either the #2 or Y receiver running down the seam. 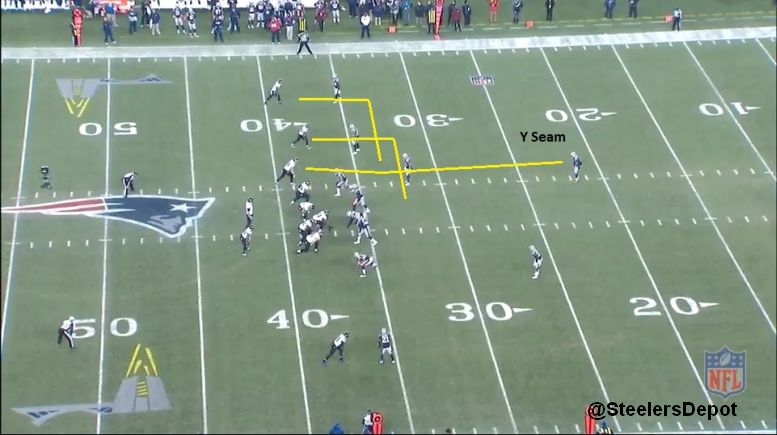 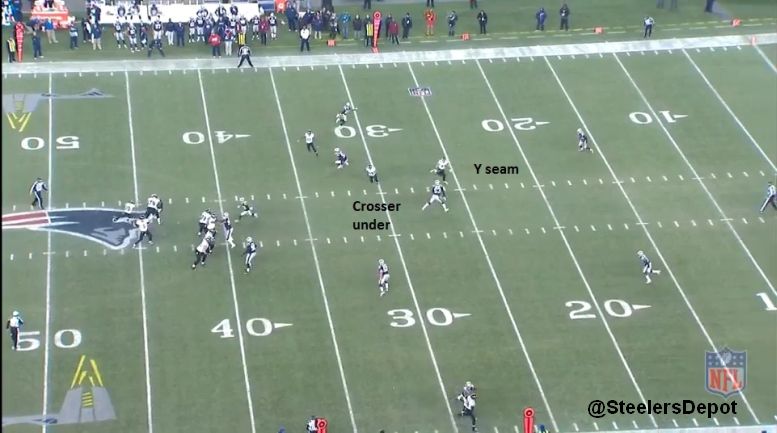 Like in the run game, they attack with a variety of personnel and formations. They will go 12 personnel spread you at, using the athleticism of Pitta and the size of Darren Waller, #84 and a hybrid type who played WR at Georgia Tech, to create mismatches. They also got back one of their suspended players, TE Nick Boyle, who has seen some snaps.

The team recently released Devin Hester, leaving Chris Moore in charge of the return game. He’s a rookie and the sample size is too small to judge him.

Justin Tucker to me is the best kicker in the league with a range from here to the moon. The wings on the field goal team are Boyle and DE Lawrence Guy.

Sam Koch is the holder and hasn’t thrown a pass in his career.

DB Anthony Levine leads the team in special teams snaps by a healthy margin with 324.

While Sunday’s game between the Pittsburgh Steelers and the Baltimore Ravens falls on Christmas Day, there certainly won’t be any gift exchanges happening between these two fierce AFC North rivals with the division title on the line.

As Alex so elegantly broke down the Ravens’ offensive scheme above, I’ll take a closer look at the individual players on this Baltimore offense heading into the Week 16 showdown at Heinz Field.

Looking back on the article I wrote about this Baltimore offense heading into the Week 9 matchup in Baltimore, very little has changed to this point seven weeks later.

With Joe Flacco under center, the Ravens are still the ball-control oriented offense that thrives on the short-to-intermediate passing game while still looking to establish some sort of consistent running game with the duo of Terrance West and rookie Kenneth Dixon, who I was extremely high on coming out of Louisiana Tech.

Sitting 18th in total offense (347.1 yards per game) heading into this weeks game, the Ravens really haven’t improved offensively since making the switch from Cam Cameron to Marty Morhinweg at offensive coordinator.

The large number of passing attempts puts the Ravens’ run/pass percentage at 63 percent pass to 37 percent run. Fortunately for Baltimore, that split has worked for the most part this season, but it’s concerning for a team looking to make a deep playoff run when you can’t run the football consistently.

West and Dixon are quite talented on the ground and through the air, but the struggles have been up front as the line as evolved throughout the season as All-Pro guard Marshal Yanda has moved from right guard to left guard, allowing Vladimir Ducasse to slide into the mix at right guard.

Here’s how they’ll likely line up on Sunday from left to right along the offensive line:

Stanley and Yanda have been a solid duo on Flacco’s blind side, providing the rigid quarterback with ample protection on the left side, but where the issue has been as of late is up the middle and off the right side.

Ducasse has been very average, which raises questions as to why guys like John Urschel and Ryan Jensen aren’t getting second looks at right guard.

With the struggles up front, it has hindered a running game that attempts just 23.2 rushes per game on average, putting them well near the bottom of the league in that category.

When things are clicking in the running game, you can get plays like this from West and Dixon.

Should Baltimore actually commit to the run more often than they have, the Ravens have a very dangerous combination, at least in my eyes. You have the power with West and you have the speed and shiftiness with Dixon. Both can catch the ball as well.

However, Baltimore can get dominated at the point of attack in the running game, which puts them behind the 8-ball a ton in games.

Baltimore just can’t commit to the run though, so pretty much what they’ve done is use an extending running game of sorts with Flacco throwing a lot of short crossing routes and check-downs out of the backfield, allowing his receivers to make plays after the catch.

Steve Smith Sr. is still dangerous across the middle and after the catch, while Mike Wallace still has speed for days, as the Steelers are quite familiar with following Week 9’s 95-yard catch-and-run for a score.

One guy who has taken a step forward since the last meeting has been Breshad Perriman, who has showcased some run-after-catch ability in this offense. Although Flacco doesn’t target him nearly as much as Smith or Wallace across the middle, the big, physical receiver can run through — and away — from guys in the open field.

Along with the receiving corps having some success as of late, Flacco has really developed some serious chemistry with tight end Darren Wallner, while relying heavily on Dennis Pitta across the middle of the field.

This offense is by no means a sexy, aesthetically pleasing group, but they get results (for the most part) and rarely make mistakes, allowing their opponents to take advantage.

On special teams, Baltimore still has the best kicker in football in Justin Tucker. Sure, his antics post-field goals are annoying at times, but he’s earned the right to do it because he has arguably the strongest leg in football and is so incredibly consistent.

Anywhere 55 yards and in you can count on the Ravens getting three points off of Tucker’s leg.

In the punting game, Sam Koch is quietly steady, often giving the spotlight in the kicking game to Tucker. On the season Koch is averaging 46.3 yards per punt, providing the Ravens with arguably the best kicking combination in the NFL.

In the return game, Baltimore recent cut Devin Hester due to struggles with fielding punts while also failing to provide a spark on special teams. In steps rookie Chris Moore and veteran defensive back Lardarius Webb to fill the void left by Hester.

On kicks, Moore is a homerun threat and already has a 34-yarder to his credit on the season. Webb will mostly serve as the punt returner in place of Hester, but he’s simply back there to field punts without turning the ball over.