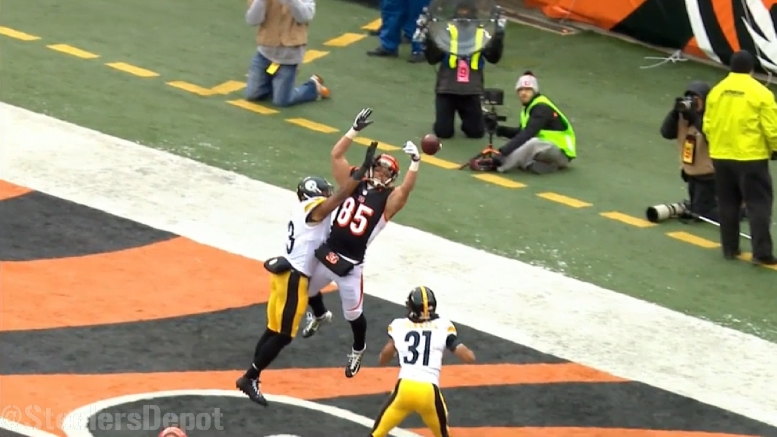 Pittsburgh Steelers free safety Mike Mitchell is probably always going to have his critics, about as many or more of them, it seems, compared to the number of people he has in his corner, judging by social media. Whether it’s Steelers fans calling him out for his on-field excitement or taking a bad angle or just generally calling him overrated—or opposing head coaches calling him out as a dirty player while defender his own dirty player—the man has been a polarizing figure.

Which is why it’s sometimes better to just let somebody’s play speak for itself, and, while Mitchell hasn’t always or consistently been on the top of his game this year, in his third season with the Steelers, he has really solidified the back end with rookie Sean Davis during their five-game winning streak.

One thing in particular that he seemed to excel at on Sunday against the Bengals was in his open-field tackling. According to Josh Carney’s missed tackles report, he didn’t have any this week, so that’s a good place to start. Now let’s take a look at some of those tackles he made.

The first one that comes to mind came early in the game with the Steelers in a nickel front. Mitchell checked down into the box late on the play and filled the huge alley made between the right defensive tackle and the right outside linebacker, making the open-field tackle on Jeremy Hill for a one-yard gain. Mitchell knew he got the better of the back on that play, giving him a friendly tap on the helmet.

Later in the quarter, on the final play of that opening drive, the safety was a few yards deep in his own end zone at the snap, and broke to the sideline chasing Tyler Eifert in coverage. He was in good position to contest what would have been a difficult catch that the tight end was unable to make.

Toward the top of the second quarter, Mitchell was in a single-high look when the Bengals ran a quick screen to their wide receiver to the left. He broke back inside, and if he were able to get past Mitchell, may have been able to score on the play, instead of settling for 10 yards. Another solid open-field tackle that he tracked well and took the appropriate angle to make.

Later in the quarter, the Bengals began working down the field, and on second down were able to crack through the Steelers’ front with Rex Burkhead carrying the ball. Davis and William Gay seemed to have some miscommunication here, which allowed Eifert to occupy both of them, freeing the back to the third level. Again, Mitchell made a strong open-field stop after a nine-yard gain that perhaps could have gone the distance otherwise.

I would never make the argument that the veteran free safety hasn’t had a history that includes having taken some obvious bad angles, and even some tackling inefficiency, but it isn’t as rampant in his play as some critiques might suggest. And games like Sunday show the type of player he can be.