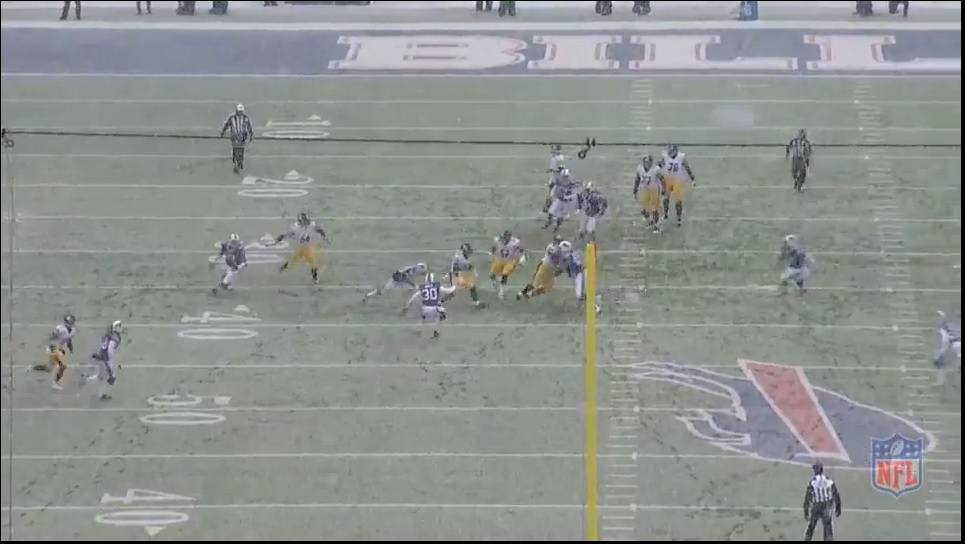 Quick film room look today. Bruce Arians was known as the screen king but Todd Haley might run them just as often. But Haley’s are arguably more complex and he’s added in another wrinkle they’ve run the last month. And it’s hard a lot of success. Let’s take a couple of looks.

The screen is run through Le’Veon Bell. Instead of a traditional screen with multiple offensive linemen pulling, on this angle screen, it’s just one, right guard David DeCastro. And Bell runs an angle route, an initial stem to the outside before pivoting back inside with the goal of getting under the block of DeCastro.

I first noticed them run it in the loss against the Dallas Cowboys. They ran it twice, this being an example of the second one. Haley runs this out of an empty set. Bell stems outside, pivots in, gets the block from DeCastro, and turns it into a big gain.

Here they are running it the following week against the Cleveland Browns. Again out of empty. Bell is split out as the #1 receiver to the bottom and there’s a little less emphasis on the outside stem. A hard jab to the outside and then cutting back in under the block by DeCastro.

And here it is last week on third down against the Buffalo Bills. Bell’s in the backfield here but the concept is all the same. Can’t show it all in the GIF because the play takes eons to end but Bell is somehow able to run away from everybody and reel off a 32 yard gain.

It’s also worth noting these are all PPO, pass/pass options. To the top, the Steelers run a bubble screen on all three plays. So if Bell isn’t available, or the coverage is favorable at the top (soft corners, weak tacklers), Ben Roethlisberger has the ability to throw the ball there too.

It’s his first part of the progression in the second and third GIFs. Even if the WR screen isn’t there, it has the added benefit of moving the linebackers away from Bell. So as Roethlisberger comes back to Bell, the linebackers are sliding away from him.

And give the ball to Bell in space? That’s a tall task for the defense.