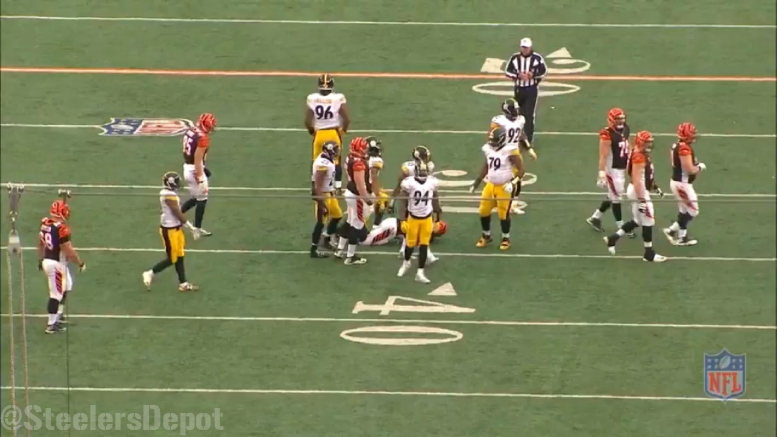 While it would be fair to say that the Pittsburgh Steelers had to unexpectedly rely upon second-year defensive end L.T. Walton for a select portion of Sunday’s game against the Bengals, it would be inaccurate to say that they had to unexpectedly play him, because the fact of the matter is that, technically speaking, he started the game. As in, he was on the field for the first snap of the game.

Of course, the Steelers opened in their 3-4 defense. In recent weeks, the Steelers have been using Walton as their right 3-4 defensive end and using Ricardo Mathews as a nickel rusher. But Mathews, while he missed time, still played 32 snaps, which was more than half of the game, yet Walton still logged 36 of his own, or 62 percent of the Steelers’ total defensive snaps on Sunday.

Technically, Walton was officially kept off of the stat sheet, although I might argue that there was an assisted tackle or two in there somewhere in his performance. Regardless of whether or not he may have produced any statistics, however, as we well know in Pittsburgh, a 3-4 end’s contributions are not measured in statistics.

For a young, inexperienced player, Walton held his own nicely at the point of attack several times throughout the game without making any really obvious mistakes, although he was beaten a couple of times.

The first snap of the game was not one of them, on which he displayed a good understanding of leverage and commanded a double-team block reasonably well to set the perimeter of what would go down as a two-yard run. It was good to see his active hands and churning feet on this play.

Later on that opening drive, he actually showed what was perhaps his sole glimmer of a pass rush throughout the game, working in the nickel over the right guard. Off the snap, he slide down inside and was able to swat down the center’s far hand, which allowed the second-year defensive lineman to gain penetration and disrupt the throwing lane. He had the presence of mind to get his hand up, but the pass still got off cleanly—and for an 18-yard gain.

In the second quarter, the Bengals were inside the Steelers’ five-yard line, but they still countered with their nickel, with Walton on the field. Once again, he did a reasonably sound job of navigating a double-team block and closing his gap while the edge defenders swept in to make the play.

Late in the game, about midway through the fourth quarter shortly after the Steelers took the lead, the young man nearly had himself a tackle for a loss, with Bud Dupree getting it instead.

But Walton helped set that one up with his performance, showing a quick outside hand to get to the edge around the right tackle on a sweep run to the defensive left side. He even worked through the pulling left guard and likely would have made a diving stop had the back not jumped out of his reach, only to be met by four other defenders.

As a matter of fact, it looks quite apparent to me as though Walton still had the back by the leg at this play, so he probably deserves at least an assisted tackle on this one, if not a primary tackle. It would be his lone stat, but it would have been well-earned, indeed. You can see him in the background of the cover image above feeling pretty pleased with himself.