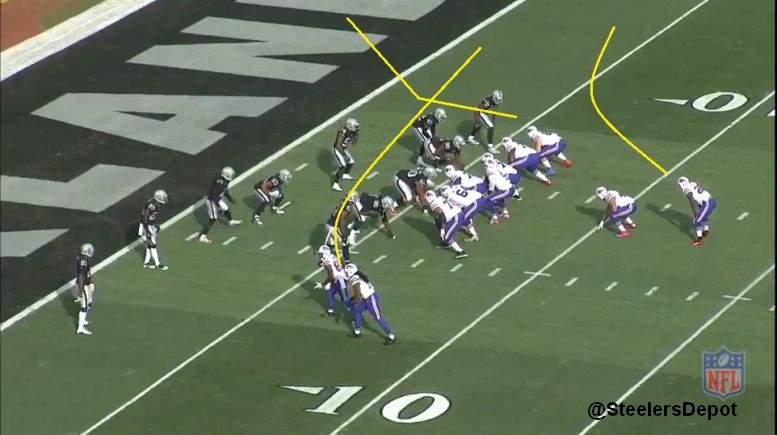 The Bills’ run game is their bread and butter, the heart of the offense. It’s one of the most effective units in the league for a ton of reasons. It’s lead by Lesean McCoy, a top five running back in the league. He’s averaging 5.5 yards per carry, one of the top marks in the league.

As an offense, they’re averaging 5.4 yards per carry. It’s the top mark in the league by over half a yard and if they were to hold that mark, it’d be the best in the league since the Minnesota Vikings finished with that same average in 2012. The last time any team surpassed that for the year was the Atlanta Falcons in 2006. So bottom line, the Bills’ rushing offense is stupid good.

Tyrod Taylor factors into those runs and has 469 yards on the ground this season. He’s one of the most athletic quarterbacks in the league.

Their projected offensive line will be:

Their rushing attack is as varied as anyone in the league. They throw so much at you, so much misdirection, and it makes it really tough to defend.

Personnel and formation-wise, they have a little bit of everything. 11 personnel, 21 personnel, 12 personnel, tackle-eligible, tackle-over (shifting LT Glenn to the right side), split back. Pistol, diamond, shotgun sets. There’s so much going on.

Here’s a look at that tackle-over, also known as an unbalanced line. 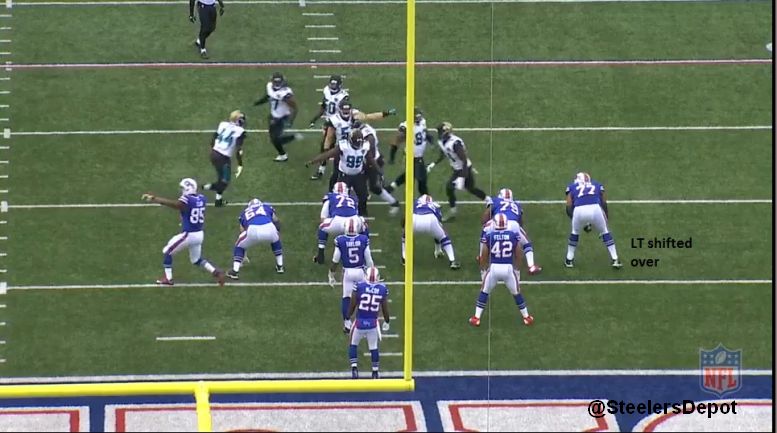 Jerome Felton is their fullback, #42, and plays quite a bit. 36% of the snaps in last week’s loss to the Oakland Raiders. Their tackle-eligible is #71 Cyrus Kouandjio.

They’ll pair McCoy and Reggie Bush or Mike Gillislee in the backfield sometimes, too. 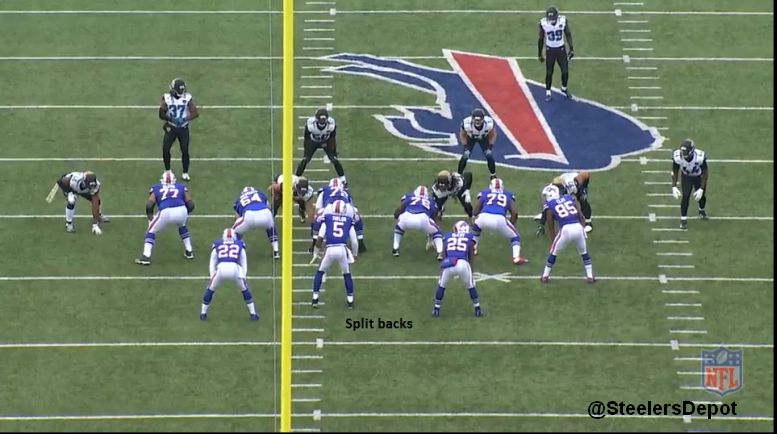 At times, the Bills will flat out run a triple option offense. Like here against the Jacksonville Jaguars.

That’s just something you don’t see in the NFL. At all. And it makes the Bills a unique challenge to defend.

Get a lot of gap schemes from the Bills. Whether it’s kicking out the EMOL or trapping the three tech, they’ll do it. They also have a G Lead play where the frontside guard pulls. 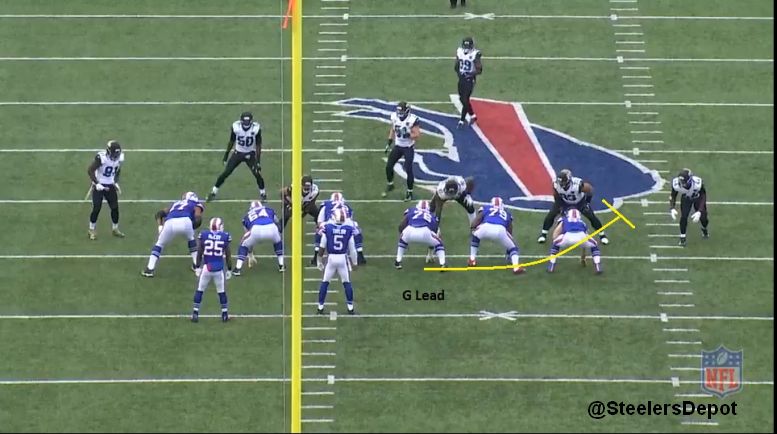 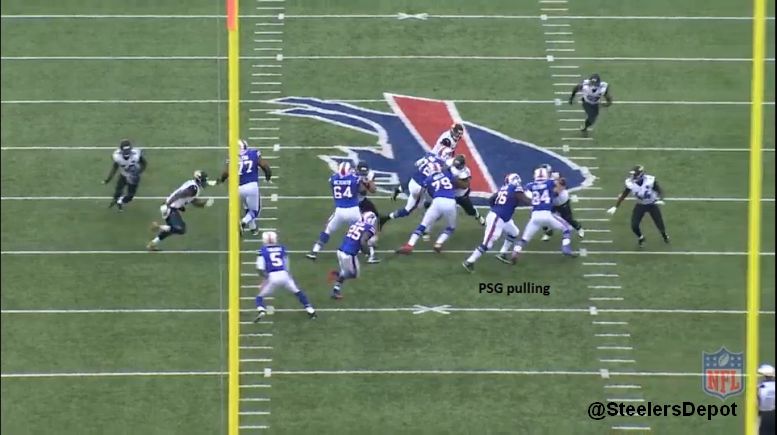 Or run a counter play with the center pulling. 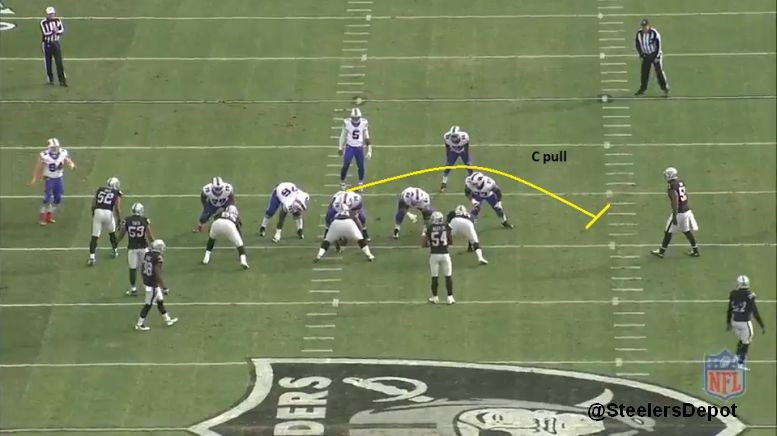 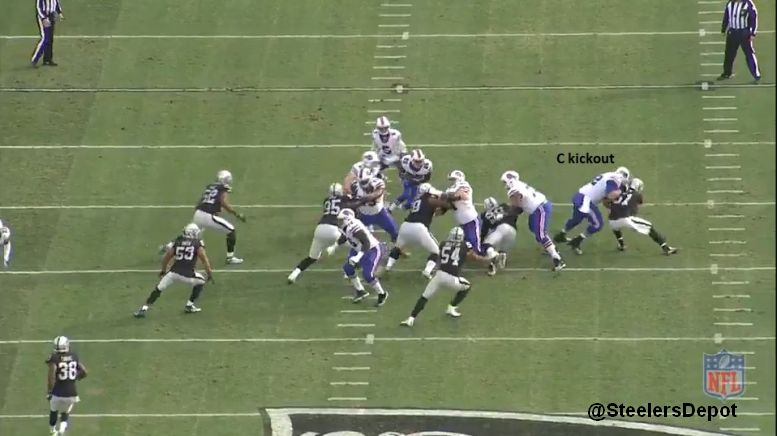 Or how about a speed option (which you’ll see in Josh’s section)?

And oh yeah, they have an outside zone and off tackle perimeter plays, too. They run pretty much everything except for a dart scheme (backside tackle pulling) and heck, maybe they do that too and I just didn’t see it.

They have a big, strong offensive line, an athletic quarterback, an elite running back, and a scheme that throws the sink at you. Combine all that and you see why they have one of the most effective units in the league. And why you should be really concerned about trying to stop it.

It’s clearly the weaker half of the offense but it doesn’t mean they’re totally inept. Taylor of course leads the group, having a below average year statistically. He’s completing just over 60% of his passes, averaging 6.6 yards per pass, with 11 touchdowns to five interceptions. He’s been sacked an alarmingly high amount, 34 times on 348 attempts.

Overall, the Bills have been sacked the third most times – 35 – while attempting the third fewest passing attempts. Ripe for the picking from a Steelers’ pass rush that is getting hot.

Sammy Watkins is their top target and finally getting a little closer to full health. Only 12 receptions in an injury-marred season but he is averaging a healthy 15.2 yards per catch. Elsewhere, Robert Woods and Marquise Goodwin play off each other well.

Overall, they haven’t gotten a lot of chunk plays. 31st with just 25 passes of 20+ yards, and tied for 26th with only four of 40+. But, they are a feast or famine passing attack and get a lot of triple-chunk type plays.

Couple other numbers before diving into the X’s and O’s. Their their down offense is middle of the pack, converting 41% of the time, but they have a good red zone offense. Sixth in the league, finding the end zone 65.8%.

To their offense. The Bills use a lot of mirrored concepts, the same routes to each side. This often includes a smash/seam look, a curl/go route combination, as shown here. 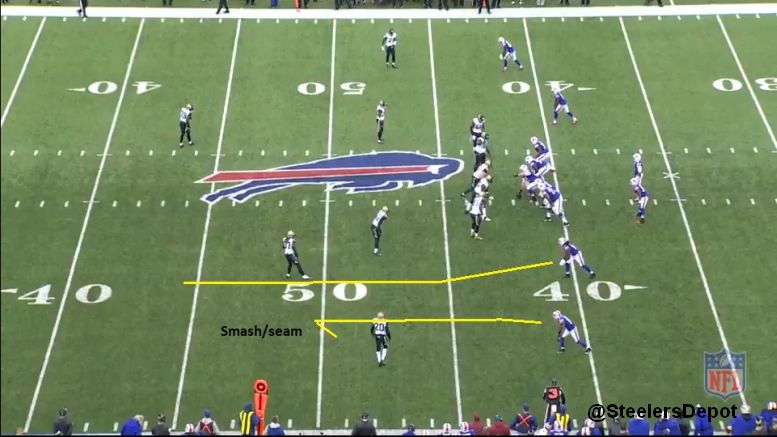 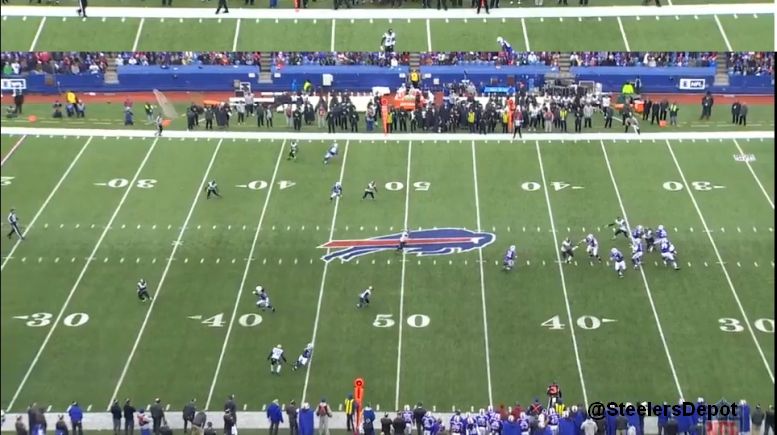 Watch for any reduced splits. An alert to their over routes, those medium crossers that have killed the Steelers for years, though something I think they’ve gotten a little better at. 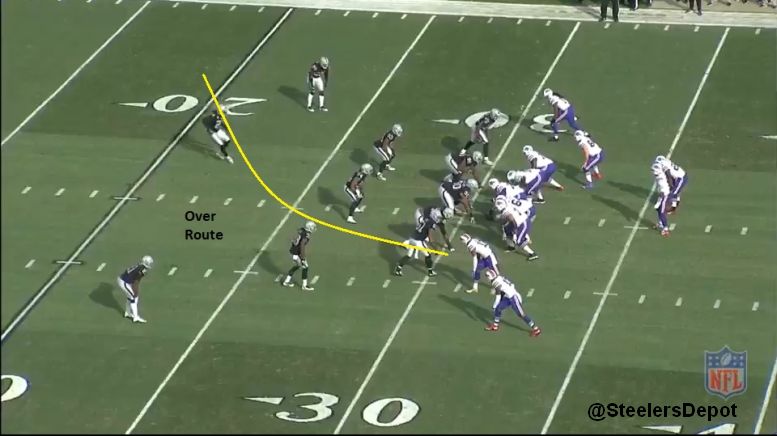 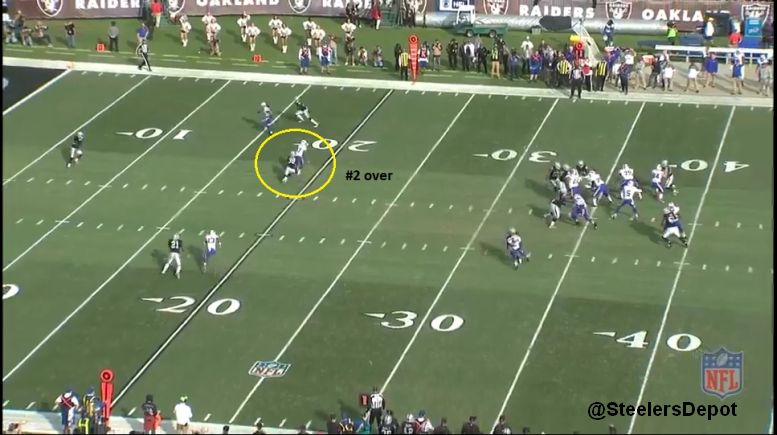 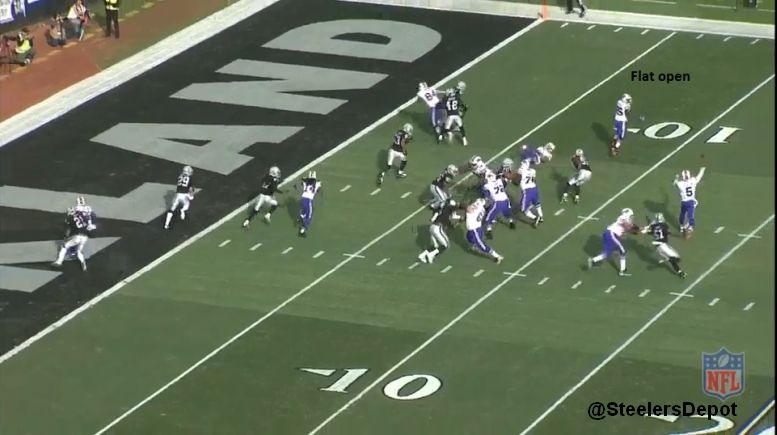 Or a snag concept (curl/flat/corner) out of Trips Bunch. 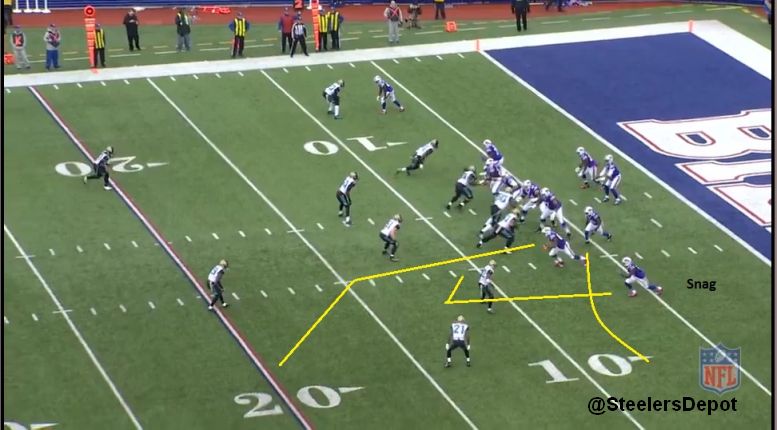 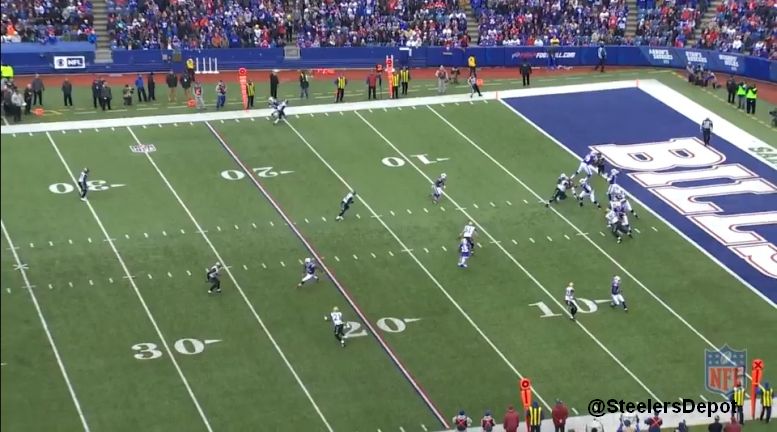 Josh has more than I have this week. On the wings for the field goal unit sit TE Nick O’Leary and Douzable. Holder/punter Colton Schmidt has never attempted a pass in the NFL.

Following a relative easy few weeks in terms of offensive attacks, the Pittsburgh Steelers face a tough test this Sunday as they make the trip to Buffalo to take on the league-leading Bills rushing attack in what expects to be cold, snowy conditions, which is the norm at the time of the year in Buffalo.

This current edition of the Bills is a classic Rex Ryan team that relies heavily on the ground game, doesn’t turn the ball over a ton (eight turnovers on the season) and takes a ridiculous amount of penalties per game (95 penalties, 4th in the NFL).

Credit to the Ryan and the Bills though, since the current formula works for them. Since the bye week, Buffalo is 2-1 and held a 15-point lead in the second half on the road last week against the Oakland Raiders before Derek Carr and Khalil Mack took over to lead the silver and black to victory.

Offensively, the Bills go as the ground game goes, and that all starts with LeSean McCoy, who currently sits sixth in the league in rushing with 949 yards (86.3 yards per game, 5.5 yards per carry).

Since coming over to Buffalo for Kiko Alonso two seasons ago, McCoy has put up some impressive numbers behind a strong offensive line that has thrived in Ryan’s system of smash-mouth football.

Although Shady doesn’t strike anyone as a powerful back, he has plenty of wiggle in a phone booth to rack up the yards for the Bills.

On this run two weeks ago against Jacksonville, McCoy is left all alone with two unblocked Jaguars defenders on the edge. By attacking quickly downhill with his speed, McCoy is able to set up the defenders for an inside cut, allowing him to burst all the way home for a 75-yard touchdown.

When he’s in the open field he pretty much can’t be caught.

Last week against Oakland the Bills ran a similar play for McCoy. He nearly broke this one for a score too.

McCoy hits the seam so fast that he has secondary defenders on their heels almost immediately, which only benefits McCoy in the open field with his blazing speed.

Outside of McCoy, Mike Gillislee plays a big role for the Bills inside the 20-yard line and has become the de-facto goal line back for Buffalo. He’s a power runner that doesn’t look to dance; he simply puts his head down and looks to run through you.

What makes this running game so dangerous though is the mobility of Tyrod Taylor. Ryan has never had a quarterback like this in his career, so it’s no surprise that the veteran head coach has fun unleashing this guy against defenses.

In the red zone you’ll see a ton of this from Taylor and McCoy, which makes them so tough to stop in a small area.

This is a classic option from the Bills designed to get Taylor attacking the edge to force a defender to choose whom to take. Here, the Jacksonville defender picks Taylor, leaving McCoy all alone, allowing him to walk in for a touchdown.

When not utilizing the classic option, the Bills will employ the read-option in the red zone. Here, Taylor completely fakes out Mack, allowing him to walk in around the corner for the score.

This offense might not be explosive through the air, but on the ground they’re so difficult to stop even if you know what is coming.

That’s a testament to the dominance the offensive line has displayed on the ground even after losing Pro Bowl center Eric Wood for the season with an ankle injury.

Left to right, this is how the Bills should look on Sunday:

Overall, this unit is full of road graders on the ground, but where they struggle is in pass protection. Through 13 weeks, Buffalo has allowed the third-most sacks in the league with 35.

That number has largely played a role in the struggle of the passing game.

Through the air, Taylor doesn’t have a ton to work with outside of Sammy Watkins, who struggles to stay healthy. Charles Clay and Nick O’Leary are nice tight ends on paper, but both struggle to catch the ball.

Oftentimes it feels to me like the Bills have to force the ball to Watkins to get him involved, which can take the flow out of the offense at times. That’s concerning.

With Watkins struggling as of late, Justin Hunter has emerged as one of Taylor’s favorites, hauling in four touchdowns on just eight receptions. Those four touchdowns are the most on the team for receiving options.

Robert Woods should make his return this week, while speedster Marquise Goodwin has gotten involved in the passing game as of late, giving Taylor another outlet to work with.

There are plenty of names here to work with, but the consistent production just isn’t there yet.

On special teams, Buffalo could really use an upgrade at kicker. Dan Carpenter is just 15-for-19 on the season missing half of his kicks from beyond 40 yards, and he’s missed three extra points this season already.

Punter Colton Schmidt is solid, averaging just under 43 yards per punt, dropping 18 of 57 punts inside the 20-yard line for the Bills.

In the return game, Brandon Tate and Reggie Bush are the two main returners for the Bills. Tate gets a majority of the work on kicks and punts, while Bush comes in to spell at times.

The duo has come close to breaking off longer returns this season, so Pittsburgh coverage units will have to be on top of its game on Sunday.