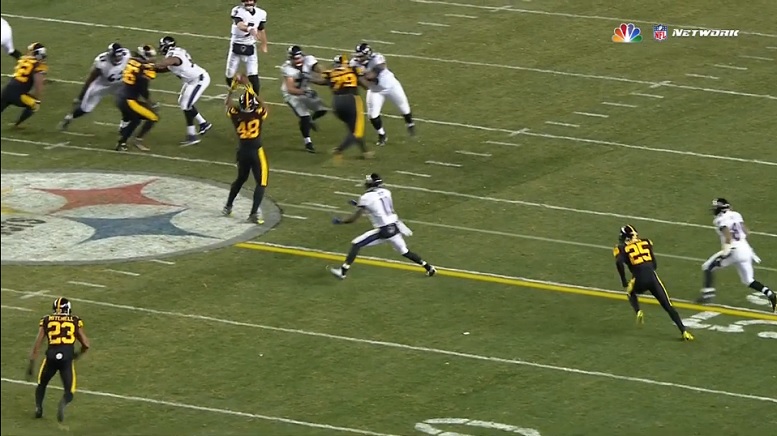 In what came down to being the most important game of the regular season, Pittsburgh Steelers linebacker Bud Dupree came up big in some small ways. The former first-round draft pick will be an important piece of the defense if they want to move deep into the playoffs.

While all of the talk has been on the three Steelers rookies, Dupree is just a second year player who is critical to the defense’s growth moving forwards.

Dupree primarily plays on the left side of the defense with James Harrison on the other side of the field. While many like to look at statistics such as sacks and tackles, Dupree did a good job doing things that weren’t on the stat sheet against the Baltimore Ravens. He also has some clear things to work on, but that is not different than any other 2nd year player, especially for missing half of the season this year.

After watching the game again, it did not seem like they ran his way as much as up the middle or to the left.  From a coverage standpoint, Dupree seemed to be in the right spot almost every time.

First lets take a look at a few examples of where Dupree looked good and bad when he dropped back in coverage:

On this play, Dupree has to watch for the underneath short pass in zone coverage and while he quickly attacks Ravens running back Kenneth Dixon after he catches the ball, but misses the tackle.

Although Dupree does slow him down and the tackle is made shortly thereafter, it would be nice if he could wrap up the running back up in the open field.  He won’t always be lucky enough to have backup so quickly.

From bad to great…this play was important for Pittsburgh to get the ball back in the 4th quarter so they could go down and score.  On 3rd and 3 it is basically a must stop and Dupree drops back and tips the ball so Ravens wide receiver Kamar Aiken is unable to catch it.

This is probably one of the forgotten plays in the game, but it was just something small that kept the momentum out of Baltimore’s hands.

Next, lets take a look at how Dupree did in defending the run and rushing the quarterback.

In play action it is difficult to know if the running back has the ball or not. Getting faked out can be due to a numerous amount of reasons, but you have to try and stay disciplined.

While it is hard to not get faked out, Dupree bites badly. If he doesn’t, it’s possible he’s there for the sack or at worst, force an incompletion. The play goes for 11 yards, but on a bootleg like that, sometimes they can be splash plays and this type of a mistake will have to be held to a minimum.

Watching in real time, the one sack that Dupree acquired against Baltimore probably did not look very impressive. The linebacker gets a good jump off of the line, but is unable to push back or beat the offensive lineman. The secondary does its job as Joe Flacco cannot find anyone and he has to climb the pocket.

Dupree is able to jump side to side and ultimately track Flacco down for the sack and was able to make the smart play with his vision in the process. Patience isn’t always easy for young players, but Dupree uses a lot here.

On another play where he is unable to get good pressure, Dupree affects the play. As Flacco scrambles to his right, Dupree is able to disengage from the lineman and chase the Baltimore quarterback to the boundary.

Dupree was unable to force Flacco out of bounds, or to make him throw the ball away, but was able to make the quarterback throw it at a difficult angle and it ultimately went incomplete.  A great hustle play.

I believe that Dupree will be a major X-factor for the Steelers D in the playoffs.  He will need to get pressure off the edge and be in the right spots when he drops back in coverage.  The linebacker has seemed to be improving consistently since returning from injury which is a great sign for Steelers fans.