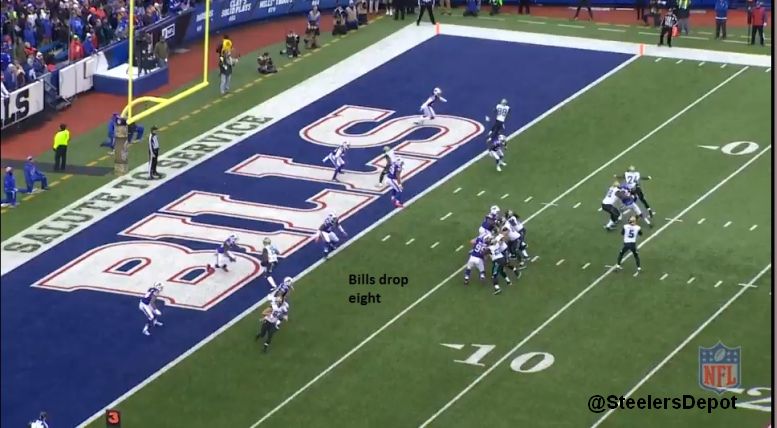 The run defense has been below average statistically. Allowing 4.1 yards per carry, tied for 13th highest, while they’ve allowed 44 rushes of 10+ yards. That’s third most in the NFL. They’re middle of the pack in 20+ gains given up, just seven, while the Steelers still somehow have only two on offense, the fewest in the league.

Buffalo has allowed 15 rushing touchdowns, which as you’ll find is as many as they’ve given up through the air, ranking 4th most in the league. So something to think about in the red zone. Run it in.

The Bills technically run a 3-4 defense but it’s more accurate to call it a hybrid. Often going to have one of the edge guys play with their hand down, turning it into a 4-3.

Up front, there isn’t a ton of rotation going on, similar to a healthy Steelers’ line. Marcell Dareus, big #99, is the one tech nose tackle, Kyle Williams is the weakside player (they’ll flip), and the “end” but he’s almost always playing the three tech, even in their base, while Adolphus Washington is the strongside player, who will play the five. 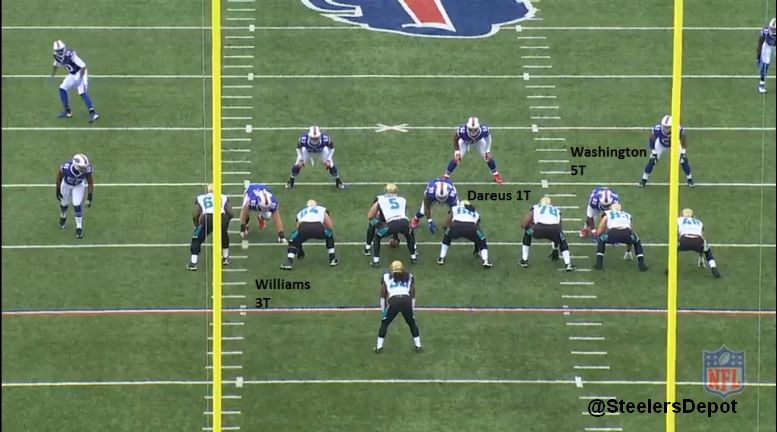 Williams has 3.5 sacks, even in his age 33 season. Super impressive.

Again, not a lot of other faces along the defensive line. The only other of note is the return of my guy, #91 Leger Douzable, who had 29 tackles and 1.5 sacks this year. He’s a linemen but as we’ve seen it in the past, quite capable of playing with his hand up.

On the edges are Lorenzo Alexander and Jerry Hughes. Alexander, who was a core special teamer until this season, is having an incredible year with 10 sacks. Hughes has five.

These guys get moved around a bit, especially Alexander. Lines up off ball sometimes and I’ve even see him be swapped inside. So they will move guys around.

Rookie Shaq Lawson, #90, often plays with his hand down as a rotational piece.

Inside sits the Browns, Preston and Zach. The former wears 52, the latter 53. It’s like a wacky ABC sitcom. Zach leads the team with 116 tackles, three sacks, and two forced fumbles. Brown is right behind with 94 tackles, a sack, and a forced fumble.

Brandon Spikes saw time last week, I’m not sure if that was by design or injury. He’s getting up there in age but still a quality run stuffer. Still wearing #51, too.

As a team, 21 of their 33 sacks have been by linebackers and 9.5 from their defensive line.

Stephon Gilmore is the mainstay at right cornerback and a healthy Ronald Darby should return to his LCB spot. The aptly named Nickell Robery-Coleman plays inside. Kevin Seymour has gotten work, though I think most of that came with Darby out.

Corey Graham and James Ihedigbo appear to be the the starting safeties.

As a secondary, they have eight interceptions, about middle of the pack in the league. Gilmore is responsible for four of those.

Overall, they’ve done a good, not great job. Only 36 passes of 20+ yards, tied for the 11th least, but seven of 40+, tied for the 13th most. The Bills have some aggressive players and teams are completing just 60.2% of their passes. Maybe some of that has to do with them taking deep shots, lower percentage plays. The Bills allow 7.6 yards per attempt, the ninth highest mark.

Coverage wise, on early downs, they play a lot of Cover 2. In third down, when things get a little tighter, they like to run more Cover 1 and Cover 1 Robber.

Down/distances I saw for Cover 1: 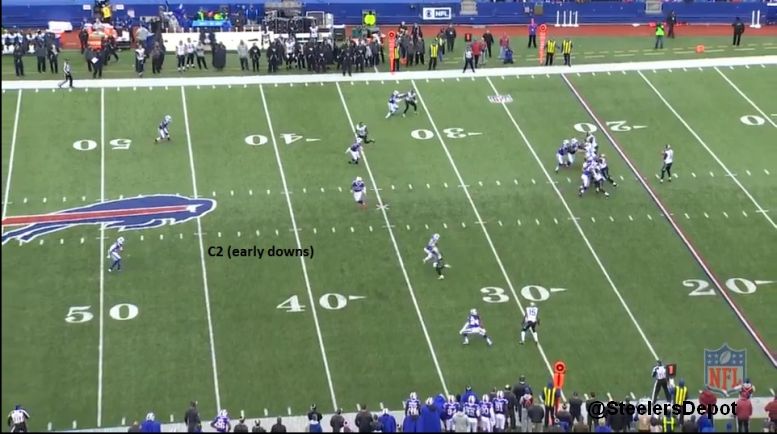 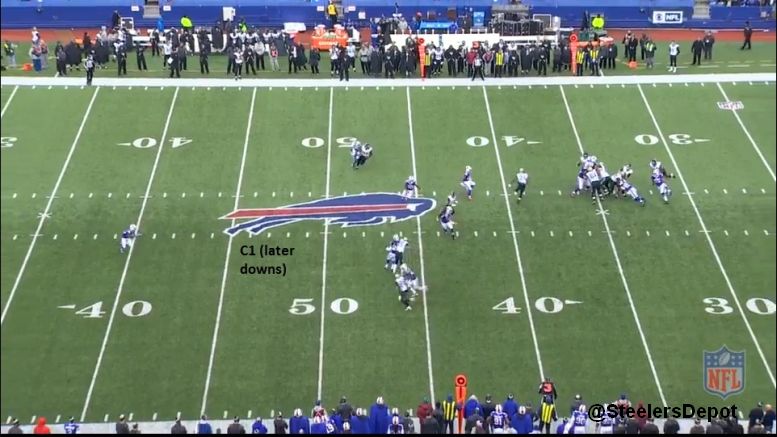 Be careful! They will run some trap coverages vs 2×2 sets, like here to the top.

Blitz wise, they do throw a ton of different looks and packages. Good bit of dime on obvious pass situations. You’ll get a 2-3-6… 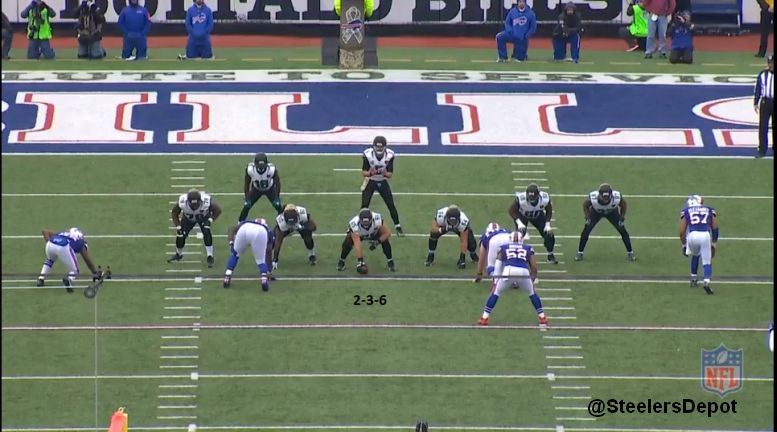 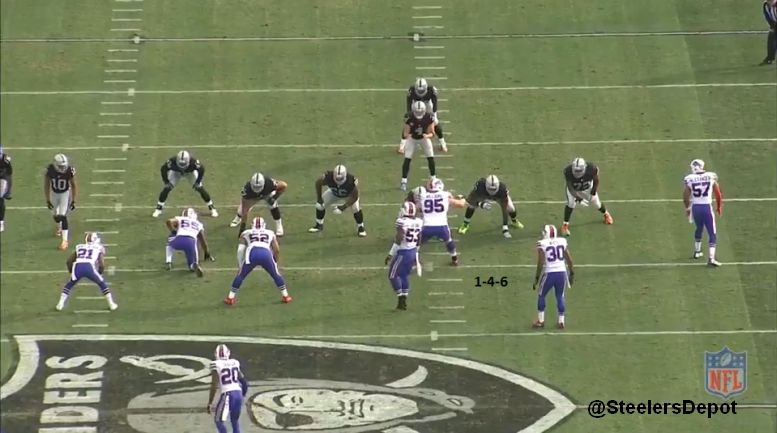 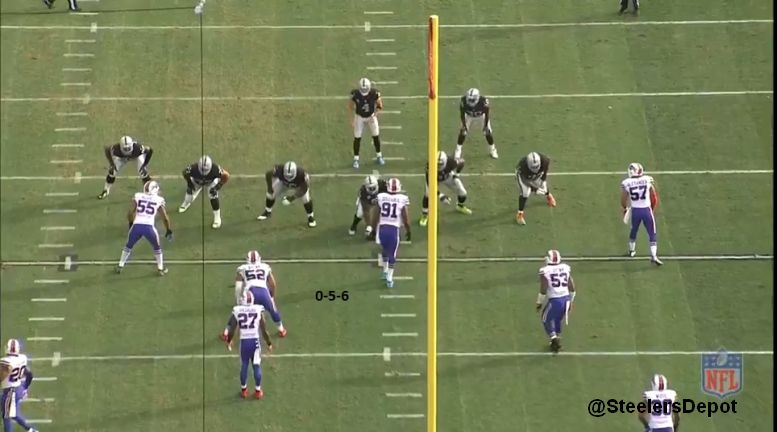 It’s a “voodoo” defense with a lot of moving parts, even if they don’t often rush 6+. But they have brought multiple DBs before, overload blitzes, usually coming in 2×2 sets from the boundary. 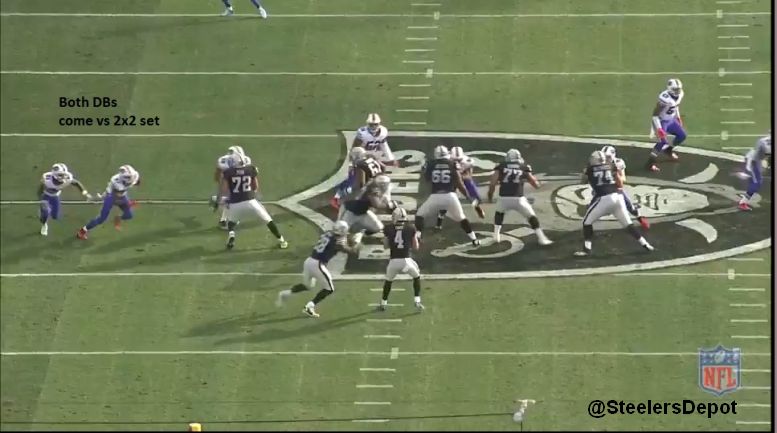 But Ryan will take his foot off the gas just as easily and drop eight into coverage. So there’s a high variance of how we’ll attack. Sorta similar to Pittsburgh but more extreme (more blitzing, more dropping eight).

Not much for me to add this week. RB Mike Gillislee is the left wing on punts so keep an eye on him for fakes. Corey Graham is the upback, and DB Sergio Brown the right wing.

Punter Colton Schmidt does have two career rushing attempts, and one conversion, but they were each because he fumbled the snap. Maybe that works in the Steelers’ favor in bad weather Sunday. The others were in excellent conditions.

The Steelers take on the Bills on what will be a chilly, possibly snowy, Sunday afternoon. Fans know how vital this game is for the overall playoff picture and jockeying division lead- let’s take a look at the Bills defensive culprits.

Their traditional 3-4 base is anchored by a couple of extremely large men- Marcell Dareus is flanked by the ageless Kyle Williams and Adolphus Washington. As a unit, they’re incredibly strong against the run; Williams & Dareus have graded positively in both facets (run and rush) throughout the length of their respective careers, and the pattern seems to be continuing in 2016.

Taking a look last week against the Oakland Raiders, we see two players who fought to the end and did what they could against an incredibly talented (and large) offensive line. Although the pass-rush was inexistent, they played plugged the gaps for minimal gains on the ground. Heck, Dareus along had 4 tackles behind the LOS alone- on the season, Kyle Williams has 27 stops, whereas Dareus, who has played a lot less snaps, has 15.

An example of this power is demonstrated below- Dareus, seen on one knee surveying the field, prepares to use that weight to his advantage. Keep in mind this is no slouch of an offensive line, either; quite the opposite. Rodney Hudson is flipped to the side like a rag doll, swallowing up Latavius Murray for a minimal gain. Maurkice Pouncey has been having a great season, so let’s hope it’s him who gets the better of Dareus on Sunday- it’ll take some concentration and strength, that’s for sure. 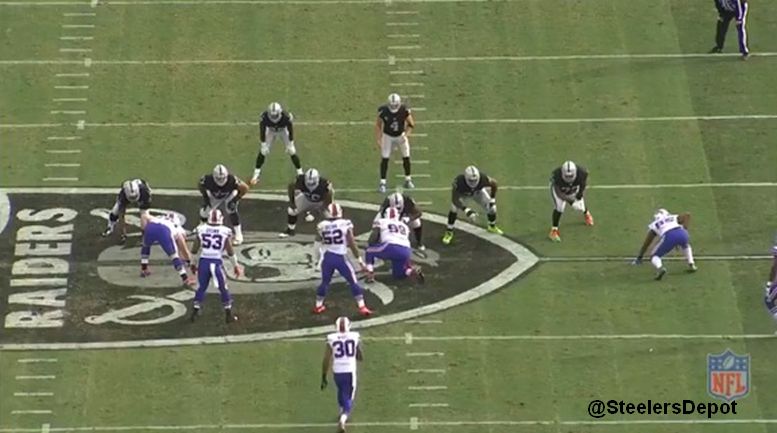 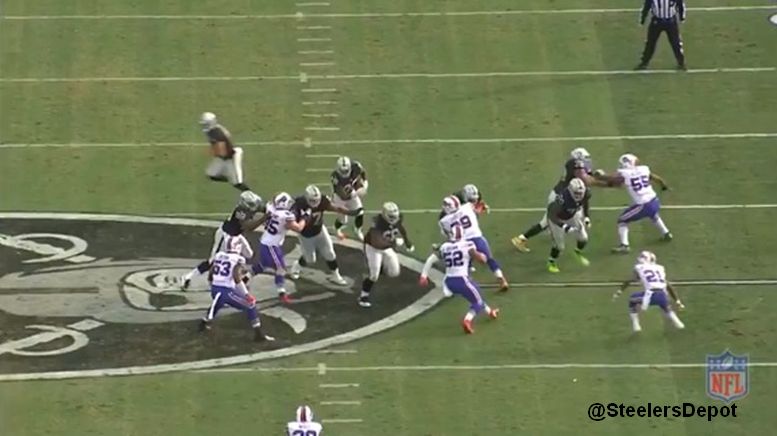 Washington is the weak link along the line, but still offers maximum effort against the run. The jury’s still out regarding his play since he’s a rookie, but he’s shown enough to warrant his 3rd round selection out of Ohio State. His 6’4”, 295 pound frame is capable of batting a few humans around, and that’s what he routinely does.

Their linebackers have had quite a few pleasant surprised, specifically regarding the edge rushers; Jerry Hughes has shown he has what it takes since signing as a free agent in 2013. This year is no different, as he’s put together 5 sacks, 3 hits, and 37 hurries thus far into the season. It’ll be interesting to see how he plays against Marcus Gilbert, who has been having quite the season.

The diamond in the rough for this defense is definitely Lorenzo Alexander. At the age of 33 in his 11th season, he’s finally struck double-digit sacks; not bad for a guy who had 9 career sacks in 10 seasons. Whatever the case may be, he’s clearly found the fountain of youth and Alejandro Villaneuva will definitely have his hands full all afternoon. In addition to his 11 sacks on the season, he has 10 hit, 19 hurries and 32 stops.

Zach Brown and Preston Brown guard the middle of the field; the latter leads the team in snaps with 803, while the former isn’t far behind with 728. Preston, however, is struggling against the run this season, and hasn’t shown much promise since entering the league as a 3rd round selection out of Louisville in 2014. That being said, it’s a big step up from last year’s putrid season, as he recorded a dismal season all-round.

Moreover, he struggles through the air as well- deploy the likes of newly found weapon Ladarius Green once more? Take a look below at his inability to shed a blocker and get to the ‘back. Your classic goal line offense/defense. Preston plays it incredibly conservatively, and frankly, not the way to go when the opposing offense has 3 yards to get into your endzone and the personnel in front of you dictates full run (he’s partially hidden behind the left post of the upright).

He gets to the gap late, and is immediately met by the pulling right guard Gabe Jackson, and is thrown into a position where he’s now incapable of making any type of play, and frankly looks more like an orange pylon than a Buffalo Bill. 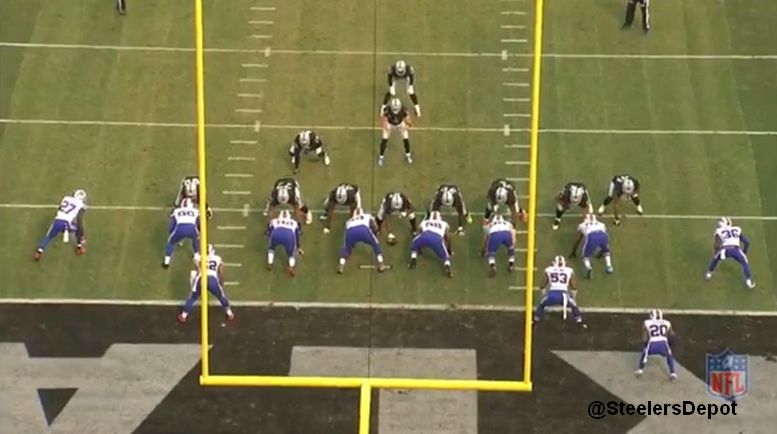 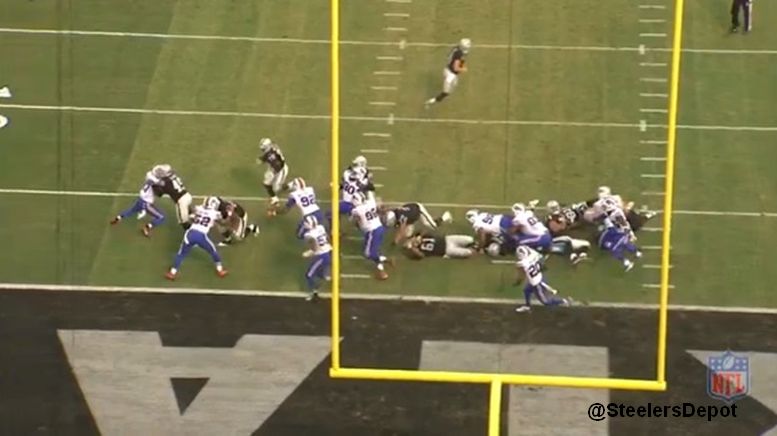 Conversely, Zach has played quite well against the run, and has coupled that with a strong showing in the air as well. Frankly, he’s one of their best defenders, and has added 3 sacks to go with his team leading 83 tackles. He’s pretty much flying all over the field- it’ll be interesting to see how he handles Le’Veon Bell’s elusiveness and agility over the middle as both a runner and pass catcher.

The secondary has held their own, but that hasn’t stopped Rex Ryan from reflecting on his loss of Ross Cockrell– a player they could definitely use right about now. The cornerbacks consist of Ronald Darby and Stephon Gilmore. Contrary to popular belief, Gilmore has had quite an up-and-down season, grading negatively in the overall category. He has shown flashes, but has struggled to keep it consist- something a high-caliper shut down corner thrives on doing.

He is coming off of one of his better games, though- a game where the Raiders stormed back and scored a flurry of points- he only allowed 2 receptions on his 4 targets for 15 yards, allowing a quarterback rating of 59.4. His worst game came against the New England Patriots; he allowed 4 receptions on 5 targets for 105 yards and a score- something that could easily be replicated against Antonio Brown.

Whereas Gilmore has had large fluctuations throughout the season, Darby has been consistently mediocre at best. He missed last week’s contest against the Raiders because of a concussion, but should be back this Sunday. Against the same Patriots, Darby enjoyed his best game of the season allowing 2 receptions on 5 targets for only 17 yards and added a batted ball. It’ll be interesting to see how Ryan uses both players on Sunday.

Corey Graham at safety has been consistently positive throughout 2016. He’s incredibly strong against the pass, and also offers inside the box run support on a regular basis. He’s had a great career thus far since entering the league in 2007, and uses his 5’11”, 195 pound frame to his use- agile, instinctive, and charges towards the ball carrier in almost every situation.

James Ihedibgo missed majority of the season, but has returned since their week 11 clash against the Cincinnati Bengals. Since returning, he’s struggled against the run, and has done what he’s asked to in the air. He’s yet another up-and-down player, as he’s experiences peaks and valleys throughout his career in both the positive and negative sense. Looking at his most recent game, he registered 5 tackles and a stop, while batting away the only ball that was directed his way (although he does play a lot of zone support).