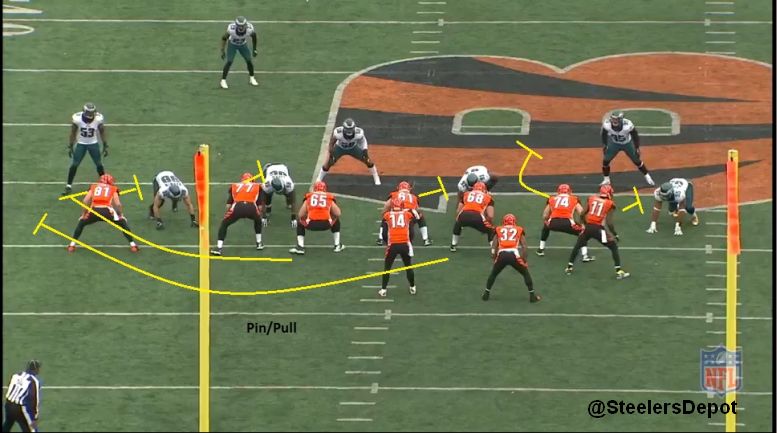 As you’d expect, even with a 13 week difference, the Bengals’ run game is not remarkably different than they were before. Nothing about them on offense is scheme wise. But the faces have changed up, mostly for the worse. Gio Bernard, their dynamic runner, is out for the year with a torn ACL.

That leaves a plodding Jeremy Hill to carry the load and he’s been dinged up from time to time. He’s on the RB Mendoza Line, a 4.0 YPC, but does have eight touchdowns this year. And to his credit, hasn’t fumbled the football. Behind him is Rex Burkhead, a versatile piece who is arguably a bigger threat as a receiver than a runner. He is, in limited action, averaging 5.4 yards per carry.

The offensive line is mostly the same personnel with one exception. There’s been musical chairs at right tackle. No more Cedric Ogbuehi who has struggled mightily, been benched, and is now the backup left tackle. In his place has been a mixture of Jake Fisher and Eric Winston. Both, without viewing them super in-depth like Josh will, have struggled. Bud Dupree could have a lot of success this weekend.

The run game is varied, as it has been the last two years. You might think of them as a zone-heavy team but there’s as much power as anything. Especially on 1st and 10 and the first play of a possession. Counter Trey is a heavy concept, just as it is in Pittsburgh.

They’ll also pin and pull pretty often. Watch for a WR being motioned in tight. They like to have him there to cut off the backside EMOL so the backside linemen can pull across.

That doesn’t mean you won’t see any zones though. And they can run it out of one back or two with H-Back Ryan Hewitt still handling that role and doing it relatively effectively.

The wide receivers are becoming a more active part of the run game, too. For the season, they have six carries on the year. They ran an end around and a reverse in last week’s win over the Cleveland Browns. Each came on 1st and 10 with one being the first play of the drive.

I believe they tried to run one the week earlier against the Philadelphia Eagles, on 2nd and 6, but it was a busted play. Would’ve been an reverse with the initial handoff to the back giving it to the receiver moving right to left (from the defense’s perspective).

On the goal line, they like to just man block everything and power their way through. Don’t get to creative down there.

The passing game has taken an obvious hit without A.J. Green though as of this writing, Green could return in some capacity this weekend. So something to monitor.

It’s also the first time this season Pittsburgh will face Tyler Eifert all season. He’s on a hot-streak, catching four touchdowns in the last three games.

Andy Dalton is still leading the charge. Thrown 16 touchdowns to six picks bu he’s been sacked a ton. 36 times in 476 attempts. The sacks in a vacuum are tied for 5th most despite being 15 in attempts.

With Green out, the leading wide receiver is arguably Tyler Boyd. He’s been the guy on third down, catching 21 passes, one of the better numbers in the league. Brandon LaFell quietly leads the Bengals with five touchdowns.

The passing game has produced some big plays. 47 passes of 20+ yards, eighth in the NFL, and 12 of 40+, which is third best, despite not having a designated deep-ball target.

Conceptually, Eifert is a big part of the offense, as you’d expect. In the red zone, look for him on divide routes and running to the corner.

And in the red zone/red zone fringe, they’ll get him down the seam with underneath routes paired with it. 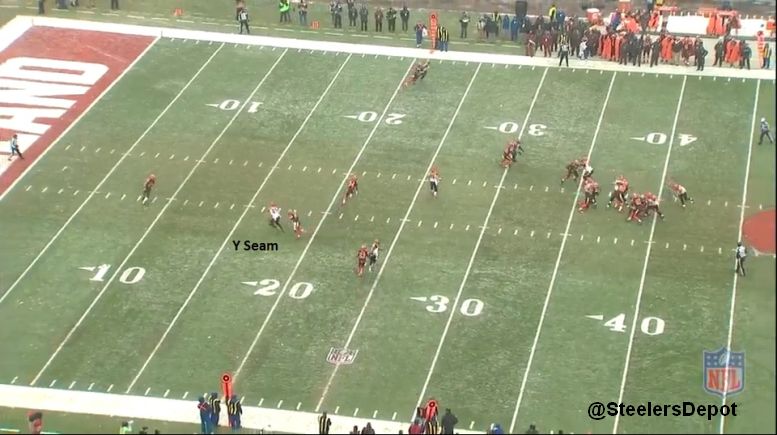 Watch for the X receiver in a reduced split on 1st and 10. Good sign of an over route, a deep crossing pattern. Can run it off playaction, too.

Alex Erickson has phased out Adam Jones on punt returns and is their guy on kicks and punts. He’s doing well, averaging a very healthy 27.5 yards per kick and a respectable 8.5 per punt. He’s conservative though with 21 returns and 17 fair catches.

Their kick return unit is a 6-1-2-2 look. They have two tight ends on the field goal unit. Hewitt to the left, Tyler Kroft to the right.

Linebacker Marquis Flowers has played the most special teams snaps of everyone.

Although names have changed on the Cincinnati Bengals offense over the last few weeks due to injury, it’s still relatively the same attack in terms of schematics as Alex covered above.

Despite not having the services of All-Pro wide receiver AJ Green and dual-threat running back Giovani Bernard, the Bengals still continue to sit in the top half of the league in offensive numbers coming into the Week 15 matchup with the Pittsburgh Steelers.

Currently, the Bengals sit ninth in total offense (371.1 yards per game), 23rd in scoring (20.6), 11th in passing yards per game (256.5) and eight in rushing yards per game (114.6). Sure, the record shows that current Bengals group isn’t a top team in the NFL, but overall this offense has been just fine over the last few weeks as the Bengals scored on six straight possessions to start the game against the Philadelphia Eagles in Week 13 before hanging 20 first-half points on the Cleveland Browns in Week 14.

Lately, I’ve heard far too much hate for Andy Dalton. Without Green and Bernard, Dalton has had to take on an added load offensively while missing his two best players, which has led to some quiet games at times.

That being said though, Dalton is still a very good quarterback leading this offense week after week. So far, Dalton has thrown for 3,555 yards while completing 64.7 percent of his passes on the season. On top of that, Dalton is sporting a 4:2 TD/INT ratio while facing a ton of pressure all season behind an offensive line that happens to be middle of the pack in the league (36 sacks, 62 quarterback hits).

With Dalton continuing to light it up for the Bengals, it has opened up a strong running game as of late for Jeremy Hill and dual-threat Rex Burkhead, who has stepped into the Bernard role in this offense.

Along with Hill, Burkhead has stepped up in a big way in the absence of Bernard. The Nebraska product has rushed for 151 yards (5.4 yards per carry) in limited action, while adding 77 receiving yards out of the backfield.  While he’s nowhere near as explosive or dynamic as Bernard, he’s done a bang-up job filling in for Cincinnati’s best running back.

Losing Green out wide to a torn hamstring was supposed to be a massive loss, but the Bengals keep on rolling through the air as rookie Tyler Boyd has emerged as a consistent possession receiver, while Brandon LaFell has been hit-or-miss as the No. 1 receiver in place of Green.

As for Boyd, the Pitt product has been remarkable in the middle of the field, hauling in at least five passes in three of his last four games, including one touchdown in Week 11 against the Buffalo Bills.

With Boyd taking on some of the burden at receiver, tight end Tyler Eifert has become Dalton’s go-to target all over the field.

Since Green went down in Week 11 against the Bills, Eifert has taken his game to another level, hauling in 15 passes for 178 yards and four touchdowns, helping Dalton in the passing game in a big way. In just seven games this season, Eifert has hauled in 28 passes for 385 yards and five touchdowns. He’s a major mismatch in the red zone and is usually Dalton’s main target.

As I mentioned earlier, the Cincinnati offensive line has been very average this season.

Here’s how they’ll line up left to right this week:

Whitworth continues to be a steady force in pass protection and in the running game, while Boling and Zeitler have their moments. Winston really struggled last week against the Browns with speed off the edge, while Bodine has been downright terrible in the last few weeks in both phases. Don’t be surprised if T.J. Johnson gets some work at center this week against Pittsburgh.

Based on raw numbers, Cincinnati has no problem moving the football up and down the field, but where they run into trouble is in the red zone where the loss of Green seems to be a bit insurmountable against a good defense. That being said though, the Bengals have looked terrific offensively in the last two weeks against some tough defenses.

On special teams, Kevin Huber is averaging 46.1 yards per punt on 62 punts this season while dropping 18 punts inside the 20-yard line. Last week against the Browns in 18-degree weather, Huber boomed a 72-yard punt, so he seems to be heating up down the stretch.

The last time we saw Bullock, the 26-year old kicker nailed 3-of-3 field goals in the win over the New York Giants for the Steelers in Week 12.

In the return game, Alex Erickson seems to be dominating the snaps on punt returns. On the year, Erickson has 21 returns for 8.5 yards per return. He’s certainly not a homerun threat by any means, but he’s smart when it comes to letting kicks bounce and knowing when to field them, and he’s not a concern when it comes to ball security.

Returning kicks, Erickson, Burkhead and Adam Jones have split the duties so far this year, but it looks like it will be Erickson and Burkhead this week. Erickson has a long of 84 yards on the year, averaging 27.5 yards per return, while Burkhead has returned just six kicks on the year.