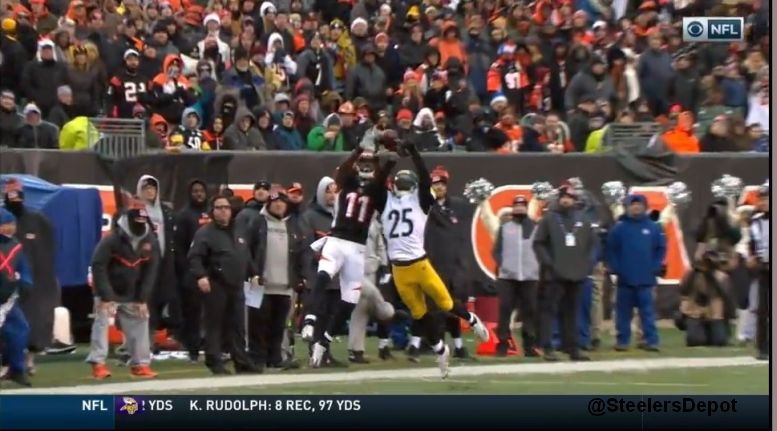 Artie Burns continues to make steady improvement, hitting his groove and coming on strong in such a short amount of time. It’s an obvious statement, not taking much watching or effort to point out that Burns has improved. But you know me, I like being able to compare and contrast. Show, not tell, and point out some of the specific improvements.

One transition he’s made is literally rooted in his transition. The ability to get out of his break, get downhill, and make a play on the football out of a bail technique. Because with the Steelers playing to his strengths, using him in a press alignment, he’s going to end up playing bail technique a lot.

Bail is the cornerback opening his hips to the field while running with the receiver downfield. It doesn’t allow a free release and helps keep vision on the football. But when the receiver breaks down underneath, it can be tough for the corner to flip his hips, click and close, and get downhill.

Here’s how he looked trying to close on this curl route against the New England Patriots. He’s at the bottom of your screen.

Count the number of steps Burns is forced to take before being able to change directions and get downhill. Not to reach the receiver but just to break down. I came up with seven.

Let’s look at a similar scenario a couple weeks later in the Week 9 matchup versus the Baltimore Ravens.

This is where Burns is at as the ball arrives to receiver Breshad Perriman. Again, count the steps. I came up with six. 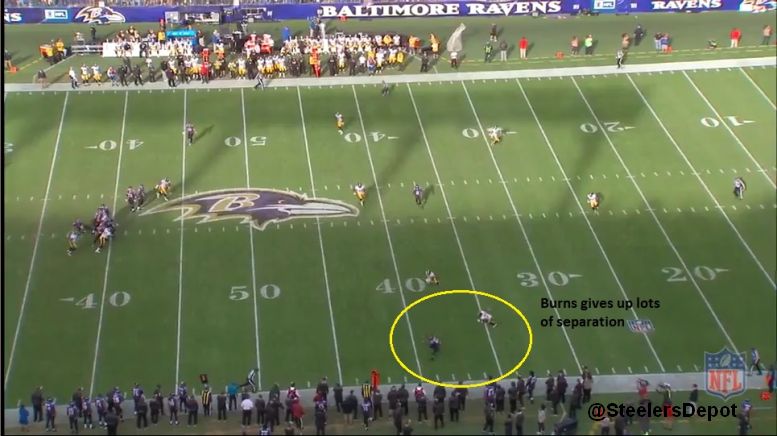 Burns is a football mile away from the receiver by the time the ball gets there. No chance to impact the play.

Now let’s flip to last week. Late fourth quarter, third down, big spot in the game. Burns is getting to play with more of a cushion here but he’s still being asked to breakdown out of bail. And he does a great job to do so, close on the ball, and break the pass up, getting his defense off the field.

Same thing, count the steps, and I see it taking Burns only two to break down. Lot smoother, less wasted motion, and it allows him to make a play on the football. And this was a big one.

He’s improved in a lot of areas. His tackling, his knowledge of the game, the latter of which is letting him play faster and more physical, akin to what he showed in school. He’s becoming the playmaker he was drafted to be and it should give fans a lot of confidence in his future and justification for being the team’s first round draft pick.