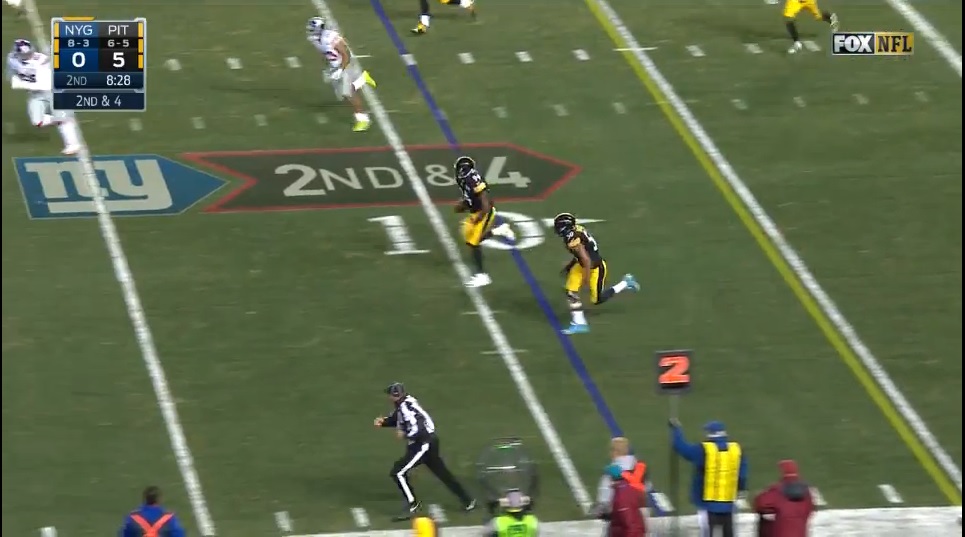 The recent winning streak of the Pittsburgh Steelers was put to the test Sunday afternoon when the New York Giants traveled to Heinz Field. It was an eventful game, as the Steelers did what they needed to do in order to walk away with the victory, winning the game 24-14.

The game started relatively slow for both sides, as both Jordan Berry and ex-Steeler Brad Wing were the stars for a better part of the first quarter. The Steeler defense, however, seemed to continue the momentum they’ve been experiencing as of late; the scoring began with not a touchdown or field goal, but a safety. James Harrison would be held in the end zone by left tackle Ereck Flowers on a 3rd and 14, resulting in a safety; the Steelers took the early 2-0 lead.

Ladarius Green would once again demonstrate his offensive potential, hauling in a 37 yard reception (albeit after dropping a short routine 1st down reception), which eventually lead to a Randy Bullock 44 yard field goal. Bullock, by the way, was in the game because of a Chris Boswell injury, and seemed to handle the short week well. The Steelers’ lead grew to 5-0.

The second quarter would bring yet another set of defensive fireworks, this time from the polarizing veteran Lawrence Timmons. He would prevent a Giant score, intercepting a Larry Donnell intended pass from Eli Manning inside the Steelers’ 5 yard line, bringing it the other way for 58 yards and setting up great field position for Ben Roethlisberger and company.

Ben would make use of the turnover, turning the short 3 play, 40 yard drive into 6 points with a 22 yard Antonio Brown reception over Jenoris Jenkins. The Steelers would go for 2, but would be unsuccessful (continuing the pattern as of late); the lead would become 11-0.

The Steelers’ offense would add another 3 points to their lead before the end of the half, as Bullock would nail his second attempt from 34 yards, making the game 14-0.

The Giants would make some noise to begin the 2nd half, but ultimately it would be the tout red zone defense of the Steelers that would prevent any points from going up on the board. Unfortunately, they would eventually get into the end zone, a la a Le’Veon Bell fumble within their own 20 yard line. Rashad Jennings would catch a short screen, walking into the end zone for 13 yards untouched for the score- lead cut to 14-7.

As I mentioned before, Ladarius Green is really starting to show his potential. His 6th reception would result in his 1st touchdown, catching a 22 yard pass from Roethlisberger- Landon Collins bit inside on a fake receiver screen, opening the middle of the field for Green- this capped a 7 play, 88 yard drive. The lead grew to 21-7.

The offensive unit would show a dent in their armor, as rookie Eli Apple intercepted a ball intended for Eli Rogers– again, the Steelers defense would come to play and force a turnover on downs after yet another unsuccessful 4th down conversion- the Giants’ offense went 0-3 on 4th for the evening.

They would then hop on the Le’Veon Bell-express to close out the game; Randy Bullock would skim the upright to go 3/3 on the day, extending the lead by a field goal to make the game 24-7. The Giants would score late via a 1 yard Sterling Sheppard reception, but that’s as close as they’d come.

The Steelers put together an impressive game on both sides of the ball, ultimately winning the game 24-14- many, including myself, thought it would be much closer than it actually was; it was a much needed decisive win, showing many they have what it takes to win the division and make noise in the post season. They bring their 7-5 record north next week to take on the  Buffalo Bills.