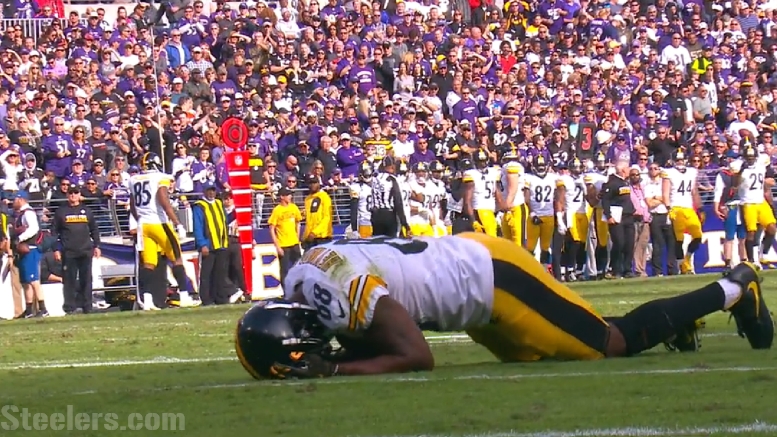 Sunday’s road game against the Buffalo Bills marked the fifth consecutive game that Pittsburgh Steelers wide receiver Darrius Heyward-Bey has missed since suffering a foot injury during the team’s Week 9 loss to the Baltimore Ravens. On Monday, Heyward-Bey somewhat updated his status.

According to Jacob Klinger of PennLive.com, Heyward-Bey indicated Monday morning that he’s now out of his walking boot and no longer riding his scooter to get around. With that said, he doesn’t know when he’ll be able to return to action.

Steelers WR Darrius Heyward-Bey said he's out of the walking boot, not riding a scooter anymore, doesn't know of a timetable for return

During his weekly press conference, last Tuesday, head coach Mike Tomlin gave a small update on not only Heyward-Bey, but sidelined running back DeAngelo Williams as well.

“The two pre-existing injuries to guys who are working their way back – Darrius Heyward-Bey and DeAngelo Williams are both being evaluated today, and hopefully we push those guys toward some level of participation this week. Like we always do, we’ll evaluate that level of participation, both the quality and the quantity of it, in terms of it being our guide.

While Williams was ultimately able to practice on a limited basis twice last week, Heyward-Bey sat out all three practices once again.

Tomlin will likely update the status of Heyward-Bey during his next press conference but as we sit here one day ahead of that, it really doesn’t sound like the wide receiver will be healthy enough to play in the team’s Week 15 road game against the Cincinnati Bengals. Perhaps he can ultimately be ready for the Christmas day home game against the Ravens as the team could use his speed on the outside to help stretch the field.