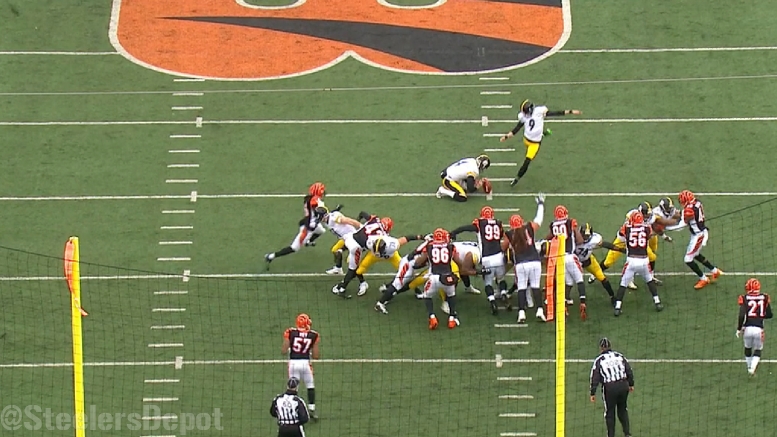 If you follow me on Twitter, you probably saw this stat. But if you don’t, know that Chris Boswell one-upped Le’Veon Bell’s historic day from a week ago. By the time the Cincinnati Bengals’ game ended, Boswell was in a category of his own.

Kicking six field goals in itself is a remarkable feat. He’s just the third Pittsburgh Steeler to do it, joining Jeff Reed and Gary Anderson, and is the 37th such game in NFL history. The first ever game, if you’re wondering, is the Boston Patriots’ Gino Cappelletti way back in 1964.

I haven’t looked at every kicker so I can’t verify this stat completely but I’ve only found one kicker to have kicked five 40+ yard field goals in a game before Boswell – Mason Crosby in 2015, who went 5/5. So far, I’ve gone back to 2003 and those are the only two.

With Boswell’s superhuman effort yesterday, even his shoestring tackle to save a kick return touchdown, Mike Tomlin gave him a gameball.

“Six for six,” Tomlin told reporters when asked to assess Boswell’s performance. “He needs no endorsement from me.”

Boswell himself was a man of few words and just happy to help his team win, putting them one step closer to winning the AFC North.

“Honestly, nothing personally for me,” he said when asked about what this record-setting day meant.”The fact that we won means more. I could’ve made seven or eight and if we would’ve lost, it wouldn’t have counted for anything. Winning the game is the ultimate goal.”

His 262 field goal “yards” if you add up the length of each attempt is the most by a kicker this season. It is not an NFL record though. Cairo Santos had 267 on a 7/7 performance last year. That’s notable for two reasons. Boswell and Santos are good friends and kicked together in the offseason. And Santos’ game came against the Bengals, though Cincinnati would go on to win that day.