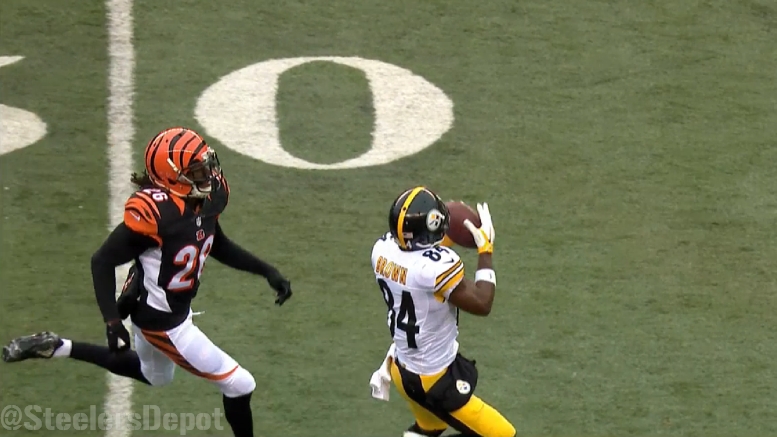 I think it’s probably safe to say by now that Pittsburgh Steelers wide receiver Antonio Brown is pretty good. Aside from his 11 touchdowns, he is not necessarily putting up what has become his usual All-World numbers that we have come to expect over the course of the past few seasons, but even when opposing teams look to take him away, he still has an impact.

In this past game, however, he even had his own teammates taking him away, as his would-be biggest play of the game, a 13-yard touchdown dart from Ben Roethlisberger on third and seven, was nullified by penalty when running back Le’Veon Bell was flagged for a chop block. It was an accurate, but highly unfortunate call, and seemed to be inadvertent.

As much as his three-reception, 58-yard day may be pedestrian fare by his standards—he tied for fourth on the team in receptions, and was third in receiving yardage—however, Brown still managed to make NFL history, not in just one way, but two.

For starters, yesterday’s game against the Bengals marked the 100th game in Brown’s NFL career. His three receptions today gave him 622 on his career, which is the most that any player has achieved in the first 100 games of his career.

#Steelers WR Antonio Brown has 619 catches in his 1st 99 reg-season games – an NFL record for the most catches in a player’s 1st 100 games: pic.twitter.com/RjZ7xl0Wwp

In actuality, Brown had already broken the previous record, which was held by Anquan Boldin, a game ago. He entered the game against the Bills with 614 receptions, which put him in a tie with Boldin. His first reception in that game—of five—gave him the record, but the new official mark for the most receptions in the first 100 games of a player’s career is now 622, eight more than Boldin’s.

That is an impressive feat considering that he was still behind Boldin when it came to the most receptions in a player’s first 90 career games. Boldin recorded 558 receptions in his first 90 games, while Brown had 554. So he has made up ground in the past 10 games.

During his own personal little tear, Brown also passed Hall of Fame wide receiver Marvin Harrison for the most receptions in any four-season span in NFL history with his third catch yesterday, which was his 470th reception in the past four years. Harrison caught 469 passes from 1999 to 2002. And the important caveat is that, of course, he still has two games to add to that total. No doubt he would like to put some distance between the two.

Now, if he manages to snare 28 passes over the course of the final two games, he will also break Harrison’s record for the most receptions in a five-game span, which is currently set at 563. Brown had 66 receptions in 2012.

In order to break that record next season, he will have to catch 94 passes in 2017, minus the number of receptions that he is able to come up with over the course of the final two games. Considering that he has 96 receptions now, and that this is a ‘down’ year of sorts, I would not bet against Brown adding another record next year.