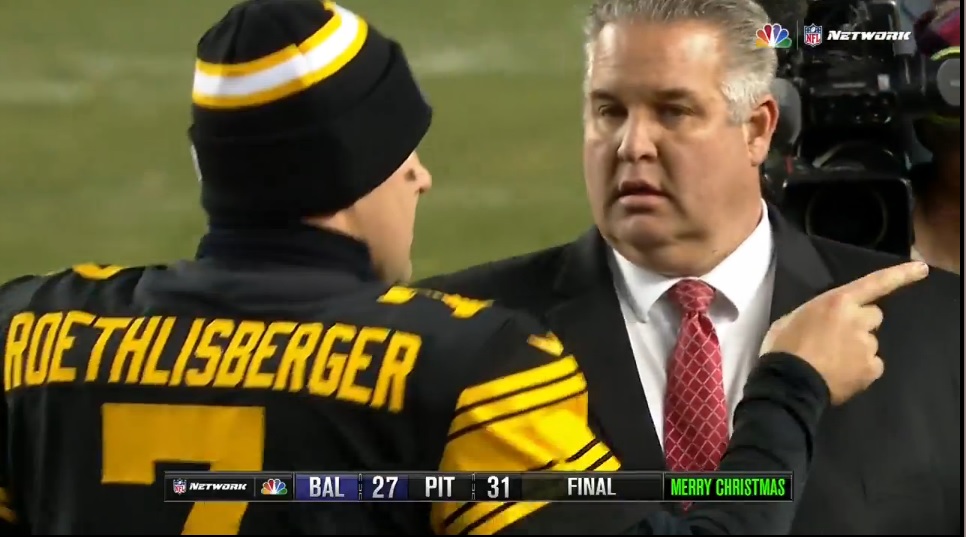 The game started with a bang- the defense came out to play, forcing the Ravens’ offense to punt the ball quickly. It would be the Steelers’ offense that would strike first, with their first offensive possession- a 9 play 72 yard drive would be capped by an improbable 20 yard Xavier Grimble touchdown reception. The drive was extended due to a third down helmet-to-helmet collision with Eli Rogers and C.J. Mosley, but it was Le’Veon Bell who was relied on heavily to get them into a position to score. The good guys jumped out to an early 7-0 lead.

The Ravens would in fact put up some points of their own, but to the tune of a 41 yard field goal by Justin Tucker for 3. The vital play of the drive came from polarizing receiver Steven Smith; a 24 yard reception would turn into a 39 yard positive play because of a personal foul against Ross Cockrell. The red zone defense held tall, preventing Joe Flacco and company from putting 7 on the board. 7-3 Steelers.

The Ravens would tighten upon defense, and would eventually get into an offense rhythm. Fortunately for the Steelers, their proceeding drive ended in no points because of a botched snap on a 45 yard field goal attempt. Again, it was the red zone defense that reared its head.

Tucker would eventually get those 3 points back on the following drive, as a 10 play 53 yard drive ended with a 38 yard field goal. The lead heading into halftime was 7-6.

It was clear this was going to be a tight game, as both defenses were doing what they needed to do. Both teams were struggling on 3rd down, as the Steelers were 2-5, and the Ravens at 2-8. Both offenses were also held to under 200 total yards of offense, with 132 (Steelers) and 186 (Ravens). Ben Roethlisberger was held to only 9 attempts, as Bell was the workhorse and clear gameplan with 13 attempts and 2 receptions.

The second half was much more interesting than the first, but began quickly for the Ravens and poorly for Roethlisberger. Zachary Orr intercepted one of Ben’s first passes out of the gates, positioning the Ravens’ offense in the redzone. An 18 yard touchdown reception and 2 point conversion by Steve Smith would make the game 14-7 Ravens. A Boswell field goal on the following position would cut the lead 14-10, but yet another Tucker field goal would balance that out to make the game 17-10.

Ben had the case of the turnovers early on in the second half; C.J. Mosley would intercept yet another Ben pass and bring it back into the Steelers’ red zone. Thankfully, the defense would once more stand tall, forcing a 23 yard field goal to make the game 20-10; it was clear the defense was doing what they needed to do, and offense needed to step up.

And boy, did they ever.

A deep sideline pass to Demarcus Ayers would draw a pass interference penalty, and propel the offense into a scoring position; Le’Veon Bell would cap the short 5 play 75 yard drive with a 7 yard touchdown run, cutting the lead to 20-17.

Ben and company would keep the momentum rolling, with a 6 play 90 yard drive; frankly, it was the AB and Bell show. Five of those 6 plays went to those two, and it was eventually Bell who would scamper into the endzone from 7 yards out after catching a pass from an on-the-run Roethlisberger. The Steelers regained the lead at 24-17.

The Ravens did have a bit left in the tank, as they were trying to regain the momentum they had clearly lost- a 14 play, 75 yard drive was capped off by an improbable run by Kyle Juszczyk from 10 yards out, making the game 27-24, with one last chance from the Steelers’ offense to reclaim the lead, and the division.

It would be Mr. Reliable, Antonio Brown, who would be the hero; his full extension lean across for the score after catching a slant short of the goal line with 14 seconds left on the clock will be remembered for years to come to say the least, and put the Steelers ontop for a final time. This all capped a clutch 9 play 72 yard drive that ate just over 5 minutes- the perfect amount of time.

After that 31-27 win, I’d like to introduce your 2016 AFC North champions-the Pittsburgh Steelers.