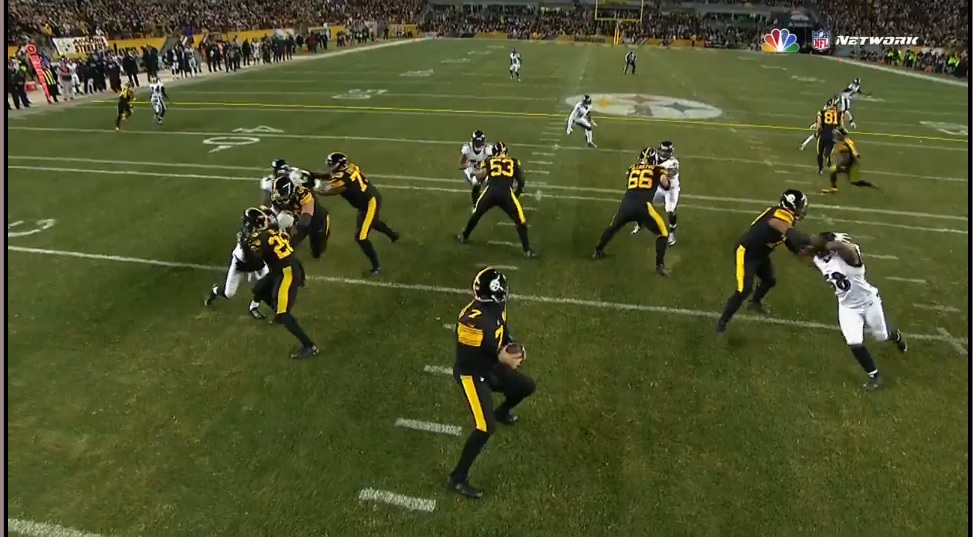 The Pittsburgh Steelers entered this game understanding exactly what was on the line. While a loss would not end their season just yet, a victory would secure their playoff future with a division title, with a home game included in that mix. And the Steelers have generally been a better offensive team at home than on the road.

That was one of the causes for optimism entering tonight’s rematch against the Baltimore Ravens, who beat the Steelers earlier this season in Baltimore by a score of 21-14, with the game being 21-0 before Pittsburgh rallied late to at least make the scoreboard respectable.

Perhaps the one player who showed the greatest home/road split in his performance had been quarterback Ben Roethlisberger, but he showed plenty of road woes in this one, choosing the worst possible time of the season to play in Heinz Field the way that he has in certain other stadiums around the league this year.

While he was generally clean in the first half, the third quarter proved to be a disaster, as he ended two of the Steelers’ three drives there with an interception. The first interception came on the first play of the drive, on a poor pass thrown with no receiver in the area, picked up just above the ground by linebacker Zachary Orr.

The linebacker returned the ball to the 20-yardl line, and the Ravens’ offense made short work of it turning that takeaway into points. On third down, Joe Flacco threw an excellent touch pass over the top to veteran wide receiver Steve Smith for the Ravens’s touchdown. Flacco found Smith again after the touchdown on a two-point attempt, which at the time gave Baltimore a 14-7 lead, after they came out of the first half with two field goals.

Roethlisberger marshalled himself for a respectable drive following the turnover, which led to a field goal to cut the league back down to 14-10, but, after the defense was able hold the Ravens to a field goal following a promising drive to make it a seven-point game, it was only two plays into the next drive that he threw his second pick of the game.

On second and six, off play action, Roethlisberger was looking for his tight end on an intermediate route by the numbers when C.J. Mosley read the throw and stepped in front of it, picking it off and returning it 11 yards to the 28-yard line.

This time, the defense off the short turnaround was able to hold and limit the Ravens to another field goal, but that extra three points made it a two-possession game, and put the Steelers down 20-10 in the early minutes of the fourth quarter.

Of course, Roethlisberger was able to follow up that turnover with a touchdown drive at the top of the fourth, including two explosive pass plays, one via penalty. And then he led the offense to another touchdown drive, finding Le’Veon Bell for the go-ahead score halfway through the fourth quarter. And then he led the Steelers to the game-winning drive, finding Antonio Brown for the touchdown with barely any time left. But the third quarter sure made things scary. And we’ll have plenty…plenty…plenty of time to talk about that fourth quarter. Merry Christmas, people.