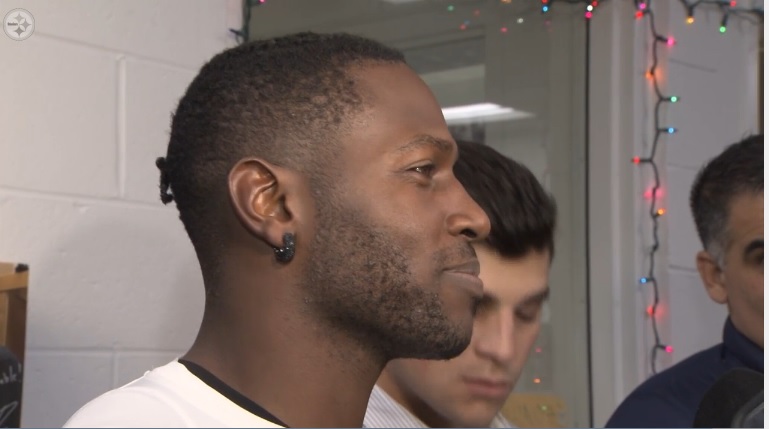 The Pittsburgh Steelers have nothing to play for this week so it might seem obvious to rest the key players on the team. But not every team is choosing to go that route. Out in Dallas, Dak Prescott will play to at least some degree, though of course, him being a rookie makes it a different situation.

But two of those players who are sitting out in Pittsburgh are happy to be doing so. Antonio Brown and Ben Roethlisberger shared those remarks over the week.

“It’s nice being able to go into this last game and rest,” Roethlisberger told Steelers.com’s Missi Matthews. “Because it’s a long season. You’re banged up. Everyone has a little something going on. Being able to take a couple days off from practice, not playing on Sunday, to just let your body get ready for this stretch run, that’s so important.”

Roethlisberger did stress the team as a whole has to get through Week 17, and for him, that means his offensive line not looking any different for the Wild Card matchup.

“For me the big thing is the guys up front. Having Pouncey out there. Having the five guys who have played almost entirely the whole season together is one of the reason they’ve done so well which translates to our success offensively.”

Maurkice Pouncey will join Roethlisberger and the rest on the bench but the numbers crunch of the roster, will require most of these players to finish out the game. As we wrote yesterday, there line could help set a franchise record if they allow one or fewer sacks against the Cleveland Browns.

Brown had a similar sentiment, having no issue with his helmet being taken away for the final tilt of the season.

“Coach made a great decision,” Brown told reporters. “Trust Coach. Just getting ready for the playoffs. We’re excited about the opportunity to play postseason football and we know the importance of playing in those type of situations.”

Brown will end his season with 106 catches for 1284 yards and 12 touchdowns, a “down” year by his relative standards but his play was still as strong as ever. That reception mark currently leads the league, four ahead of Larry Fitzgerald and ten ahead of Odell Beckham Jr, the only two names within shouting distance of surpassing him. Something to watch on the side this weekend.