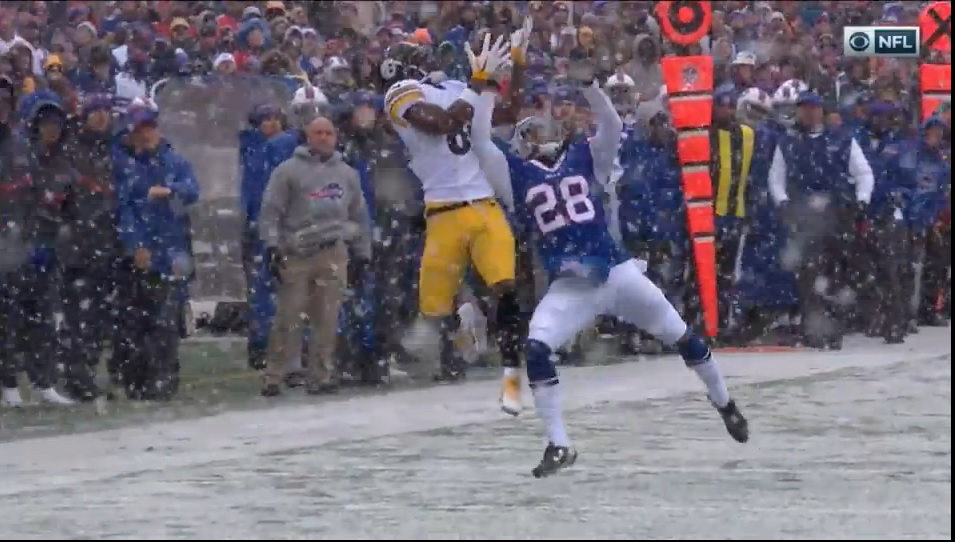 It still has a ring of amusement to it when we can look at a day on which Pittsburgh Steelers wide receiver Antonio Brown caught five passes for 78 yards and say that he had a relatively quiet game. but considering the sort of day that running back Le’Veon Bell had—nearly 300 yards from scrimmage—it does become a bit understandable.

The Steelers did run the ball considerably more than they threw it on the day, as they officially logged 41 rushes to 31 pass attempts, with no sacks, so it is understandable that Brown may not have put up his typical eye-popping statistics.

By my count, Brown did get 11 targets on the game in his direction, one of which resulted in an interception on what was either a poor pass or a miscommunication between the quarterback and wide receiver. Another uncatchable pass resulted in an offensive pass interference call.

But that is certainly not to suggest that Brown was not an important piece of the offense on the day, in spite of the fact that his first two receptions went for two, and then minus-two, yards. His final three receptions netted 78 yards, and each was important.

Brown’s third reception came on the opening play of the Steelers’ second drive, after their first drive ended in an interception. The All-Pro wide receiver, who leads the league in touchdown receptions, was able to stay just ahead of cornerback Ronald Darby down the sideline on a deep pass, beating the defensive back for a 40-yard strike.

The field-flipping play helped lead eventually to a three-yard touchdown run from Bell, the first points of the day, although in between those two plays were three incomplete passes in Brown’s direction from Roethlisberger.

On the Steelers’ next possession, Pittsburgh was facing a third and one from the Bills’ 16-yard line. Brown came out of the backfield and received the pass from Roethlisberger, picking up nine yards and setting up first and goal from the seven. Bell scored from that distance on the following play.

The veteran wide receiver also helped ice the game late with his 29-yard reception on second and 10 from the 25-yard line late in the fourth quarter. That put the ball into Buffalo territory and the Steelers even ultimately able to get a field goal out of it, giving them a 27-13 lead at the time.

Brown may not have had a monstrous game by his standards—and the weather conditions made the downfield passing a pretty dicey, as well as risky, proposition, as attested by the interception in his direction, and the three on the day—but his contributions helped lead to three scoring drives.

While the passing game did not exactly hit on all cylinders yesterday, the Steelers offense as a whole is still putting itself in good position for the final stretch of the regular season. They also secured their fourth road win of the season, and can guarantee a winning record on the road next week in their final game away from Heinz Field.