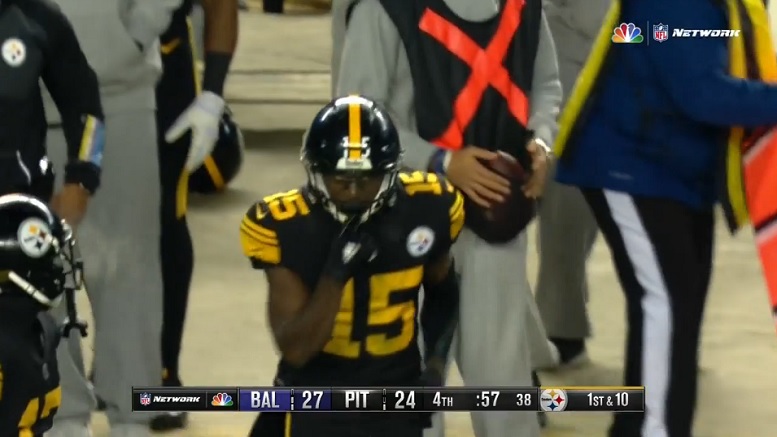 The Pittsburgh Steelers Sunday night win over the Baltimore Ravens included contributions from several young players and that certainly was great to see. If that’s not enough, a total of six rookies played a big role in that win in all three phases of the game.

In addition to cornerback Artie Burns, safety Sean Davis, defensive tackle Javon Hargrave and linebacker Tyler Matakevich being used heavily against the Ravens just as they have been for most of their rookie seasons, wide receiver Demarcus Ayers and defensive end Johnny Maxey both made their NFL debuts against the Ravens.

Ayers, who was drafted by the Steelers in the seventh round earlier this year, recorded his first and lone reception during the game-winning drive. If that’s not enough, the Houston product also drew a pass interference penalty on Ravens rookie cornerback Tavon Young during a deep pass attempt with 12:28 left in the fourth quarter. Two plays later the Steelers scored their second touchdown of the game.

As for Maxey, who was signed off the Steelers practice squad on Saturday due to defensive end Stephon Tuitt being out injured, he played 20 total defensive snaps against the Ravens in addition to three snaps on special teams. The Steelers signed Maxey as an undrafted free agent out of Mars Hill University this past April.

During his post-game press conference, Steelers head coach Mike Tomlin acknowledged the contributions made by Ayers and Maxey against the Ravens

“We had some guys who hadn’t played NFL football and tonight was their first game,” Tomlin started. “Guys like Demarcus Ayers and [Johnny] Maxey on the defensive line due to unavailability of others due to injury and I tip my cap to those guys. It’s tough enough playing in your first NFL game, but to step in an environment like that and to be positive contributors as both of those guys were, I would be remiss if I didn’t acknowledge that.”

Had injured wide receiver Sammie Coates played Sunday night against the Ravens, the Steelers would have had 10 of their last 15 total draft picks contributing in that game and that’s very impressive. Additionally, 12 of those 15 draft picks are still with the team as tackle Jerald Hawkins and cornerback Senquez Golson are both currently on the Reserve/Injured list.

While Steelers general manager Kevin Colbert has certainly missed on his share of draft picks during his tenure, he’s also hit on more than his fair share as well. Not only that, but the Steelers current 53-man roster includes several former undrafted free agents that were originally signed by the team.

It’s yet to be determined just how far this 2016 Steelers team will ultimately go in the playoffs, but should they ultimately win the Lombardi Trophy, Colbert should be allowed to permanently but his fingerprints on it.