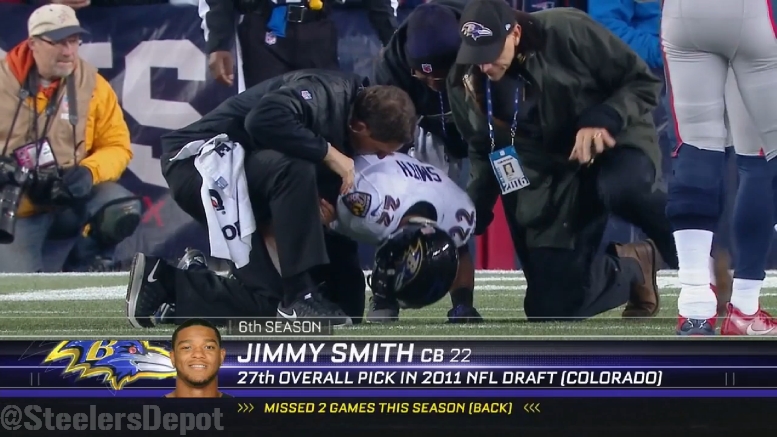 Question: Will the Steelers get a break and face a Ravens defense without Jimmy Smith?

The Steelers have seemingly had as much bad luck as good this year when it comes to facing teams either at their healthiest or their most banged up. They were able to play the Colts without their quarterback this year. Yet when they played the Dolphins and the Ravens, it was in their first games back with a healthy starting offensive line.

The Steelers will certainly not be entering this game fully healthy, with a notable starter on injured reserve already, and potentially two starters down this week due to injury, but they may get thrown a bone if the Ravens’ top cornerback, Jimmy Smith, is unable to go again while he works his way back from an ankle injury that he suffered two games ago in Foxboro.

Smith was out for Sunday’s game against the Eagles, although his replacement, Shareece Wright, did not necessarily play poorly. Wright spent some time in the starting lineup last year, and began the season there, but ended up being demoted and then benched in favor of rookie Tavon Young.

Young spent some time covering Antonio Brown in the Steelers’ last game against the Ravens, and it would have to be said that he handled himself reasonably well, although it should be kept in mind that their offense was pretty limited in that game because of Ben Roethlisberger’s knee injury.

It would be interesting to see, provided that Smith does not play, which it’s starting to look that way, how much time Young sees lining up across from Brown, as the Ravens clearly feel better about him than they do about Wright, who has become their fourth cornerback, also behind slot defender Jerraud Powers.

Of course, the Steelers have other receivers who will be looking to try to take advantage of the matchup with Wright. Sammie Coates saw an increased role on offense last week after several games of very limited snaps. Could this be the opportunity for him to finally break out of his slump and catch that home-run ball?