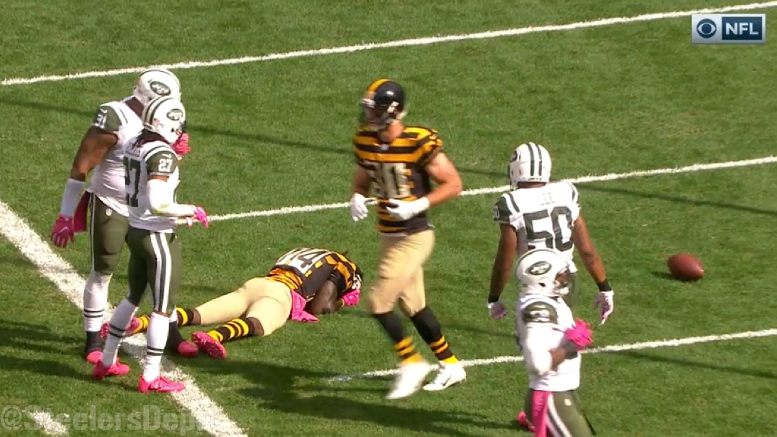 Over the course of the past three months or so, the Steelers offense has tried and tried to get second-year wide receiver Sammie Coates reintegrated into their system ever since he suffered a hand injury that resulted in multiple fractured fingers. After a very productive first five games, he has caught just two passes in the past nine.

But one of those passes came on Sunday, a 10-yard gain on one of about a half-dozen or so targets. He also got two touches on end-arounds, one of which went for 15 yards, although the second one was blown up bigtime for a loss of six on what was a poor play call.

Coates logged a lot of snaps this week against the Bengals, and it looked as though he might finally have gotten himself back into the mix on offense, back on board the moving train, to use a popular euphemism under this Steelers regime.

But yesterday he left practice early after suffering a hamstring injury, and according to at least one media report, he was not happy at all leaving the facility. Of course, only so much can be read into that, and we should know more about the extent of that injury later today.

Seven weeks back, Coates saw his most extensive playing time since his injury in the game against the Ravens. He was targeted several times, but could not come down with a catch on any of them, including a big drop in the end zone.

The Steelers were hoping to see him break out a bit in the second time around against the Ravens in preparation for a postseason run, which, if it comes, is literally just a couple weeks away. If this hamstring injury sidelines him just as he was getting reacquainted with the offense, that will be a major bump in the road.