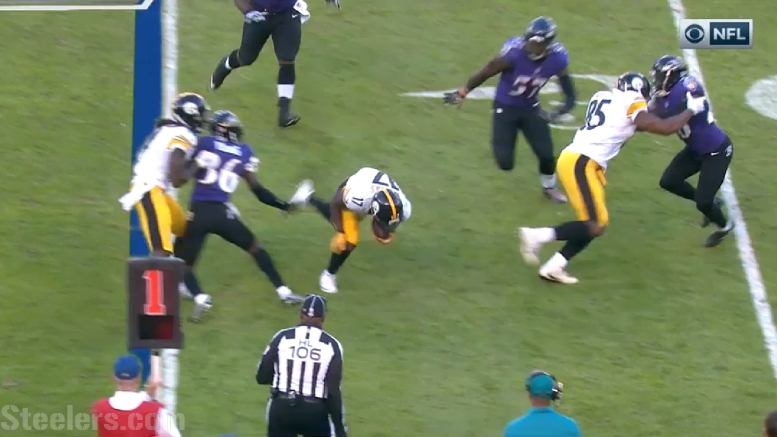 You may have noticed in yesterday’s snap counts that we posted that there was something interesting within the Pittsburgh Steelers’ snap distribution at the tight end position—specifically, first-year tight end Xavier Grimble logged more time on the field than starter Jesse James, which is the first time that that happened this season.

In fact, there had not been a game up until Sunday’s performance in which James logged less than 70 percent or so of the snaps, and that lone culprit came in the game before the bye week against the Patriots, during which he logged 54 of 73 snaps, while Grimble saw 42 snaps, including all of the snaps for which James was on the sideline.

This has been a growing trend over the course of the season, when James saw all snaps in the season opener (and I believe the second game as well), but gradually was given a couple of plays off, then a few more.

The past two games, however, seem to clearly indicate that the coaching staff no longer feels as though he is capable at this time of being a sustained tight end for every down, and that they would be better served to mix and match their tight end personnel for better results.

I have not had the opportunity yet to go through the game in terms of charting every play and making a coherent analysis about how each tight end was used and for what purposes, so that commentary will have to wait for further analysis later on in the week. For now, I just want to focus on the fact that the Steelers had James on the field for less than half of their offensive snaps.

Obviously, when the Steelers manage to get Ladarius Green back, there is not going to be room for James to have been an every-down tight end anyway—at least when Green is able to get fully up and running, which may take a game or two before he begins to log a heavy percentage of snaps, at least in theory.

But it does make for an interesting discussion about how the tight end position will look when Green does get here, and it seems increasingly likely that Grimble will remain a part of the tight end group, based not just on his increased snap count over the course of the last two games, but also on the recent roster moves.

The moving of Cody Wallace to injured reserve frees up one spot—that is, Al-Hajj Shabazz’s spot—but another could be available at the wide receiver position, which could potentially be putting Darrius Heyward-Bey on injured reserve. Or L.J. Fort could get waived.

I do wonder how James and Grimble might be used when Green returns—if one gets cast aside as the other logs nearly all the number two snaps, or if there is a distribution. Either way, I think that the decrease in James’ role should be good for his development.