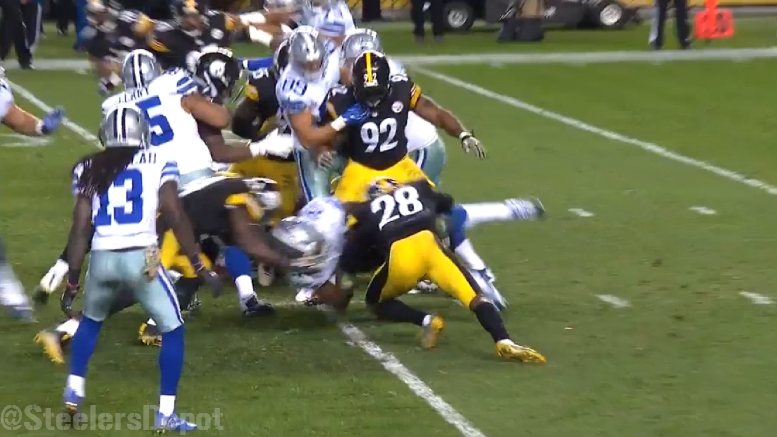 Over the course of the past couple of weeks, the Pittsburgh Steelers have been making tweaks to their secondary on the back end, largely doing so to get their rookie defensive backs more involved. First-round cornerback Artie Burns was moved into the starting lineup, while second-round safety for the past two weeks has been working in a rotation with Robert Golden at safety.

Jim Wexell writes for Steel City Insider that he expects Davis to start at safety on Sunday, after the rookie told him he has been working exclusively with the first-team defense in practice this week, though he also said that he was not yet ready to dub himself the starter.

I wrote a week ago that Davis told Mike Prisuta he had been splitting the position in practice with Golden about evenly. At that time, he told Prisuta, “I guess whoever has a better week [of practice] gets to start, then we alternate”, which obviously suggested that the starting position had been put into play.

It appears as though the pendulum has swung further and further in Davis’ direction, including seeing the rookie play a higher number of snaps on Sunday against the Cowboys, although that came with a mix of playing time between safety and in the slot. Golden did play 34 of 67 snaps at safety. Davis played 40 snaps, but nine snaps came at cornerback, according to our charting. Davis was at cornerback for the six snaps that they saw the field together. Football Outsiders actually has Davis logging 43 snaps.

Either way, we do see a clear trend. Against the Ravens, in the first game on the other side of the bye week, Davis logged roughly 40 percent of the strong safety snaps with Golden. On Sunday, that number ticked upward to around 50 percent, and he also saw additional time at the cornerback position, so the pendulum tipping toward him taking the first snap of the game is not exactly an enormous leap to get to from where we currently are.

While his highest-profile moment in Sunday’s loss against the Cowboys was a facemask penalty on Dallas’ final drive that put them in field goal position, only to see them score from distance on the next play, that was certainly not his role contribution. He contributed six tackles in total, including five solo tackles. Golden recorded two solo tackles during the game.

Davis moving into the starting lineup would give the team three rookies acting technically as starters, though all of them have and will be logging a significant amount of snaps. Javon Hargrave figures to see his snap count tick upward in the second half of the season as well due to injuries.

Of course, we should still expect to see Golden log snaps on defense, including, perhaps, snaps on which the defense feels that Davis is a better slot matchup than William Gay. And this may well continue to be a fluid situation throughout the season. Two dogs, one bone, if you will.