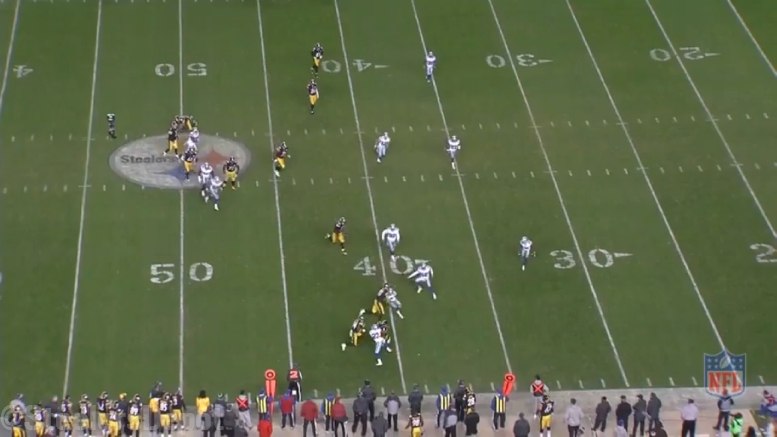 Pittsburgh Steelers wide receiver Eli Rogers has been seeing more extended playing time recently, and the reason for that is two-fold: one, there really isn’t anybody else to throw out there; and two, he has been playing well, having put together two solid games following the bye week showing some impressive catches.

He saw comfortably over 60 snaps on Sunday against the Cowboys, and unsurprisingly only three of them came out of sets that contained fewer than three wide receivers, and he was almost always the player lined up in the slot.

I did notice that the majority of the time, the Steelers preferred to isolate Antonio Brown on one side of the field while putting Rogers in the slot next to Cobi Hamilton. This turned out to be not quite as prevalent while reviewing the game chart than it initially appeared, but it was still significant.

But I also found something significant about the snaps in which the Steelers did use Rogers in the slot on Brown’s side of the field, which was roughly a couple dozen snaps over the course of the game. For one thing, they ran the ball out of this look somewhat frequently, and it was usually in the opposite direction—that is, toward Hamilton’s side of the field.

But I also noticed that Brown got a lot of attention on these snaps—including a two-point attempt—targeted seven times for six completions—all but the two-point attempt—including his touchdown reception. While that figure did include a deep target, as well as the short ‘go’ route touchdown, the majority of targets were designed to be screen passes.

Part of the reason that the Steelers are entrusting Rogers with playing time is because they see in him a player who is willing to contribute in all facets. While he might not be the tallest or strongest wide receiver in the group, he has, going back to the preseason, consistently, at least for my part, shown a willingness to give full effort in the blocking department, even if the results may have varied.

A good example of this is a two-play sequence in the fourth quarter, in which Brown received screen passes on consecutive passes. Lined toward the open side of the field on the right on the first play, with Brown outside the numbers, Rogers came down and sealed off the right cornerback to help produce a 12-yard gain.

On the second play, with the open side this time being the left, the Steelers bunched Rogers and Brown stacked up top of one another just inside the numbers. The slot cornerback came on a blitz as the safety rolled down after the snap. Rogers tried to chip the outside cornerback, but the defender played it well, and Brown was penned in after two yards.

There were other examples throughout the game of the Steelers utilizing Rogers as a screen blocker, and I wouldn’t imagine that his willingness to contribute in this area has been overlooked.