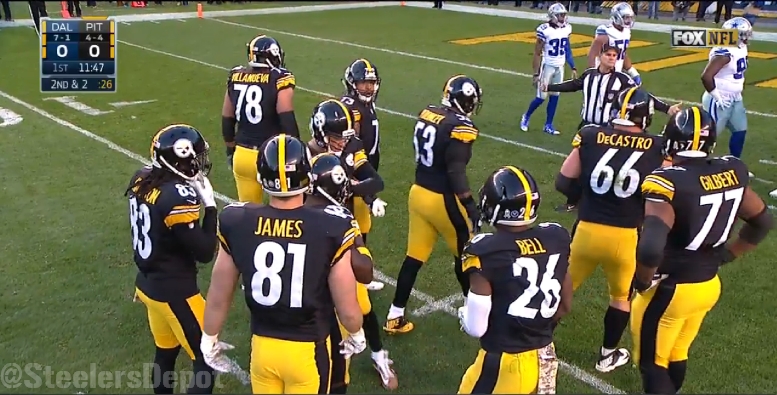 Leave it to Army Ranger and decorated war veteran Alejandro Villanueva to figure out just where the blame belongs for the Pittsburgh Steelers’ struggles over the course of the past several weeks, during which they have fallen down a rock slide from a 4-1 record and control of the division to a position in which they are now trailing the 5-4 Ravens.

I’ll give you a hint about where he places the blame: it’s not the coaches.

“How you practice is going to show up on Sundays and that’s the biggest problem we, as players, have failed to address”, he told Chris Bradford yesterday for the Beaver County Times. “We’re not being accountable on the things that we must correct”.

Accountability has been a theme of late in the wake of the recent losses, with quarterback Ben Roethlisberger in particular citing the need for the players to be more accountable and disciplined, a mix that he, of course, threw himself in. For his part, he did play dramatically better on Sunday than he did the week before.

“The coaches have done a great job of laying down the foundation for the week, of setting all the keys to victory on paper”, Villanueva went on to say. “We’re all aware of them, but then during the week, we don’t execute the plays the way they should be”.

The second-year tackle seems to be echoing the sentiments of running back Le’Veon Bell, who last week said after a penalty-ridden performance that their sloppy showing on Sunday did not surprise him, given the sloppy practices that they have been having. It was reported that he was pushing his teammates during this past week to clean up their practice sessions.

Bradford then quoted Villanueva as saying that he feels “especially guilty and embarrassed” by how things have gone recently, including with his own play, “because guys like [Mike] Munchak and [Shaun] Sarrett stay up to 2 in the morning on Monday and Tuesday breaking down film and doing a lot of hard work to get us ready for our opponents”.

He said that the work that the coaches do in preparation for the games “truly gives us every answer” but added that then “it comes to game and we come up short”. He is saying here, more or less, that he believes that the coaches are giving the players everything that they need prior to the game to win. It is what happens on the field that is coming up short.

Villanueva even added that “you feel for the guys who have put in more work than you”, speaking about the coaches. “You understand there’s a great network and system of coaches that are trying to provide us with every single answer”.

The military veteran certainly respects the chain of command. But then again, it’s not often that a subordinate throws his superiors under the bus. I suppose that I the job of the fans, whether or not it is justified.