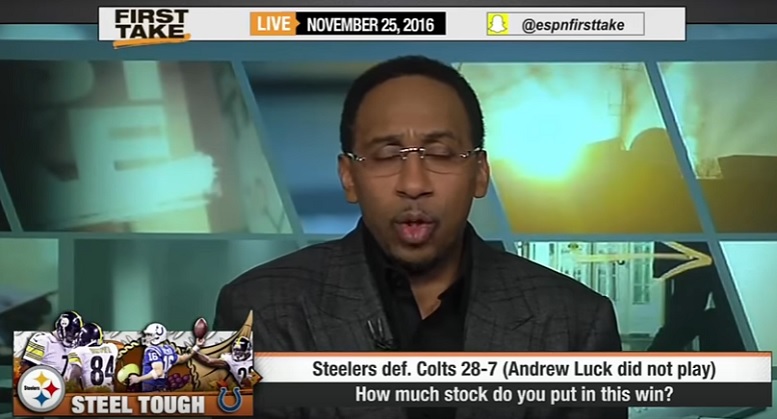 The Pittsburgh Steelers beat the Indianapolis Colts 28-7 Thursday night, but one of the team’s high-profile major media fans wasn’t impressed with the victory.

I’m of course talking about ESPN loudmouth Stephen A. Smith and he made his thoughts known on the Steelers recent win on a recent episode of ‘First Take.’

“Nothing, it didn’t mean anything to me,” said Smith of the Steelers win over the Colts. “I fully expected them to win. My stock, had they lost, it would have dropped, it would have plummeted into an abyss never to return for the rest of this season.”

After rattling off all the handicaps the Colts were facing Thursday night because of injuries, Smith added this.

“So, I’m not putting much stock in it, other than to say this, the Pittsburgh Steelers did what the hell they were supposed to do,” Smith said. “So, there is no abyss to fall in never to be seen again for the rest of this season. That much i will give them, but I’m not putting much stock in it, it’s just now they don’t fall into the abyss. I’m not overwhelmed, they were supposed to do. This is what’s called handling your business.”

The Steelers last two wins have come against teams they were supposed to beat and while they accomplished that without having a lot of “style points”, they still won. The Steelers will next play the New York Giants at home after first having a mini bye week and it will be a good test for them.

Do you agree with what Smith had to say about the Steelers win over the Colts?