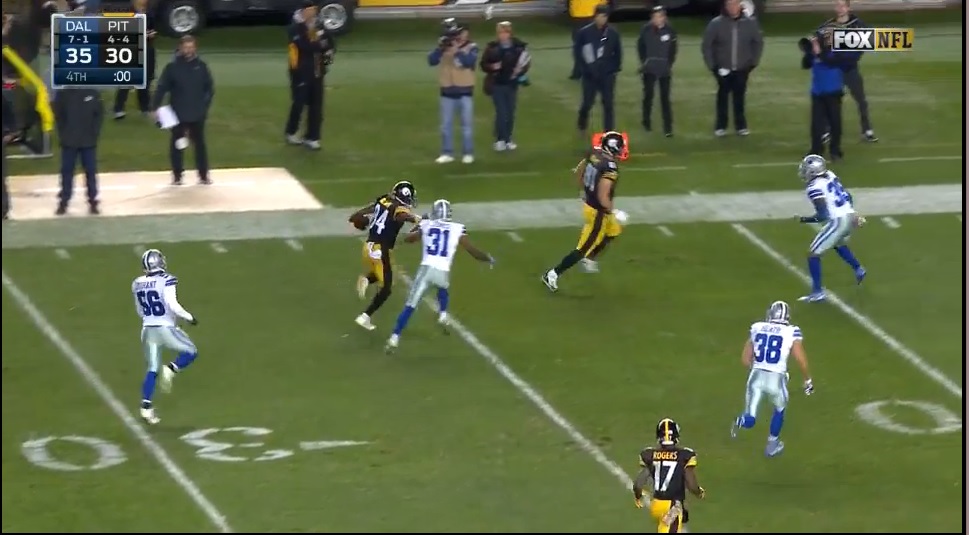 Defend every blade of grass. That’s a Mike Tomlin classic. He mentioned it again today, not in a motivational rah-rah sort of way, but to express some disappointment in the Pittsburgh Steelers’ final play.

One that ended with Antonio Brown simply ducking towards the sideline and running out of bounds. No lateral, no attempt, just a march to the sideline.

At today’s press conference, Tomlin said he discussed the decision with Brown after the game.

“At the end of the game, I’d like to see us stay inbounds and fight and claw for every scratch, every yard, every blade of grass, any opportunity we can have to win the game.”

In a follow up question, Tomlin confirmed he discussed the play with Brown but declined to offer up details on the conversation.

Brown had a spectacular game but his decision at the end was a head scratcher. To run to the sideline, limiting his space and quarantining himself from his teammates, and then duck out of bounds without even a flip of the football, showed little effort. Brown should remember what could happen on end-of-game situations, nearly scoring against the Miami Dolphins a few years back on a play that had multiple laterals.

But Tomlin had no problem with Brown voluntarily running out of bounds on punts. He was asked by Stan Savran if Brown doing so sent a poor message to the younger players on the team.

Though many have called to take Brown off the unit and reduce the risk of injury, Brown is a savvy and smart player who rarely takes big shots. Some of that can be credited to Tomlin’s instruction, as he pointed out, and some of it probably from Brown’s own intelligence of when to get out of bounds or slide to the ground.

We covered this topic in the offseason, noting that last year, only two of AB’s 22 returns resulted in what would objectively be considered a hard hit. No one should have a problem with that. But everyone should take issue with his decision on the Cowboys’ final play. That was unacceptable.