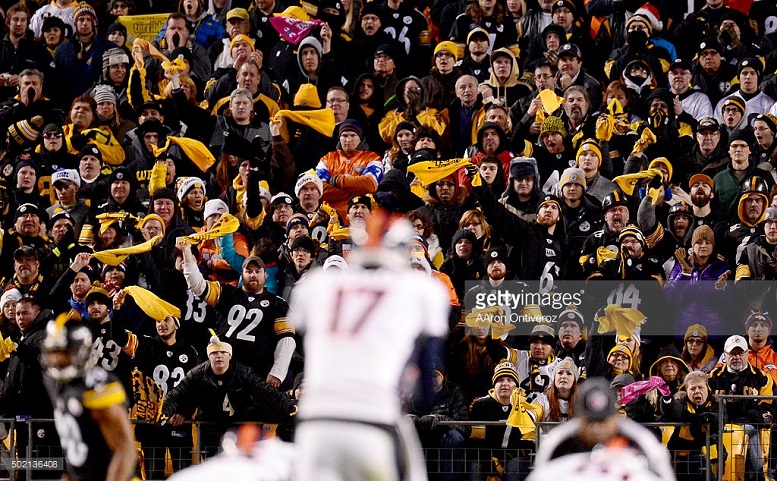 Sunday at Heinz Field, the Pittsburgh Steelers will face the New York Giants and their longtime quarterback Eli Manning. On Tuesday, Steelers head coach Mike Tomlin explained how the team’s fan base can potentially help lessen the effectiveness of Manning during that contest.

“He [Eli Manning] does a lot of communication at the line of scrimmage,” Tomlin started. “He changes plays. I imagine he’s got a lot of latitude in what they deem to be appropriate plays. The comforts of Heinz Field has an opportunity to be a significant contributor to our efforts in that regard. [I] look forward to seeing Steeler Nation support us and support us in that way because he does do quite a bit of contaminating.”

Later during the press conference, Tomlin was asked to explain how a crowd can play a disruptive part in a game even if the opposing offense uses a lot of no-huddle.

“Man, Steeler Nation has an opportunity to be a significant contributor to our efforts this week,” Tomlin reiterated. “They [the Giants] work almost exclusively out of the no-huddle offense and they probably do it for several reasons. They’ve got great continuity at quarterback and Coach McAdoo and I think that continuity provides opportunities for latitude, for Eli to get them in appropriate plays based on what he sees.

“To do that, you’ve got to communicate, be it hand signals, or more appropriately, or usually more effectively, verbal communication. If our crowd is effective, it really makes that difficult. And lastly, working exclusively out of no-huddle usually quells a crowd over time and at significant moments as a game unfolds, you’re able to communicate. Hopefully the crowd stays in the game. Hopefully we do our job in helping the crowd stay in the game so that that’s not a factor on Sunday.”

So, there you go. If you’re going to the game Sunday, Tomlin thinks you can make a difference when the Giants offense is on the field. In case you’re curious, the Giants offense has been penalized a total of eight times so far this season for false starts. Additionally, Manning has been sacked just 13 times all season.

It will be interesting to see whether or not Sunday’s crowd at Heinz Field can ultimately impact the game as much as Tomlin thinks it can.

“It’s an exciting time of year as we get into December,” Tomlin said. “In our business, they say, ‘They remember December.’ As playoff races take form and guys fight and claw to be a team on the rise and to state a case for themselves for that single-elimination tournament. It’s an exciting time for competitors, it’s an exciting time for us. We’re faced with a steep challenge this week in the form of the New York Giants. They’re a good football team. They’re a good football team who’s won six in a row. We respect that. We’ve got our work cut out for us, but whatever way would you have it?”

Hopefully we have it with a win on Sunday in front of a very loud crowd at Heinz Field.