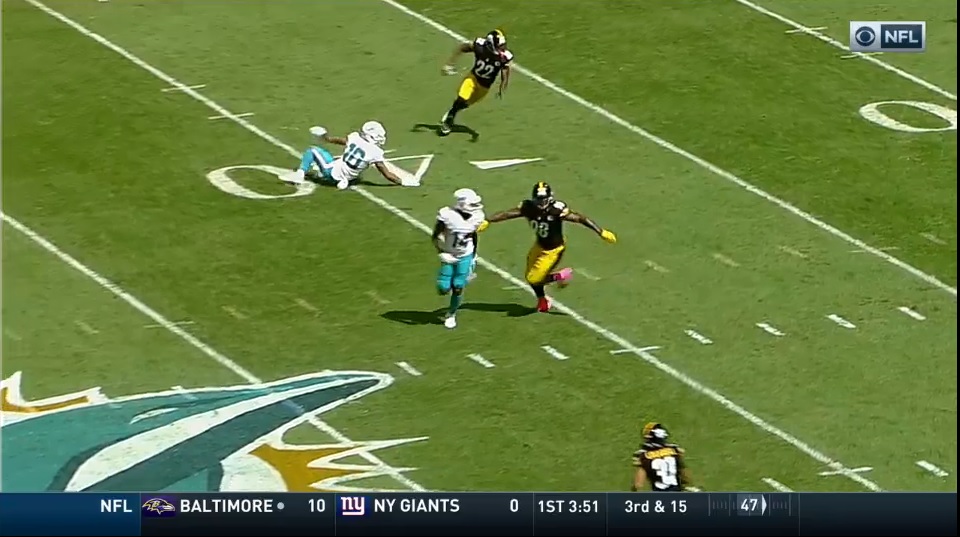 Last week, we pointed out the historical drought the Pittsburgh Steelers’ secondary is undergoing. One that would make California’s dry spell look like the Amazon jungle. Through Pittsburgh’s first seven games, no defensive back has recorded an interception, the first time that’s happened since at least 1960 and probably a full decade before then, too.

It’s given the team just three picks this year, all by linebackers. But Mike Tomlin pointed out the secondary has had their chances. They just haven’t finished plays.

“We’ve missed some opportunities,” he said at today’s press conference. “We’ve had some significant plays, balls in our hands, that should’ve been interceptions but haven’t been. We’ve got to make those plays. Often times, they change the climate in football games.

“We were up 8-3 at Miami in the latter portions of the first quarter and Will Gay had a ball that him in the hands that would’ve put us in a short field if he didn’t run it all the way back. We didn’t make the play and the game went on to unfold in the manner in which it did. Ross Cockrell had a ball in Washington in Week One that could have really put an exclamation point on how that game was unfolding. We didn’t make that play.”

As a result, the Steelers are tied next-to-last in interceptions, only ahead of the Indianapolis Colts’ two. It seems all but certain they won’t come anywhere near the 17 picks they had a year ago, good enough for 6th in the league.

Now, they’re on pace for just seven interceptions as a team. That’d be the first time since 1940 the Steelers’ defense will have gone a full season with under double-digit interceptions. Seven interceptions would be their fewest in a season, the ’40 campaign holding the current floor of eight. So again, dealing with a historical low.

The outlook matchup-wise doesn’t get a whole lot prettier the next couple games either.

Joe Flacco and the Baltimore Ravens had a floundering passing attack but his interception percentage is only middle of the pack. Dak Prescott has incredibly strong numbers for a rookie, tossing only two picks in over 220 attempts. And if Cody Kessler winds up starting for Cleveland again, he’s thrown a lone interception, tied for the fourth best interception rate of any QB in 2016.