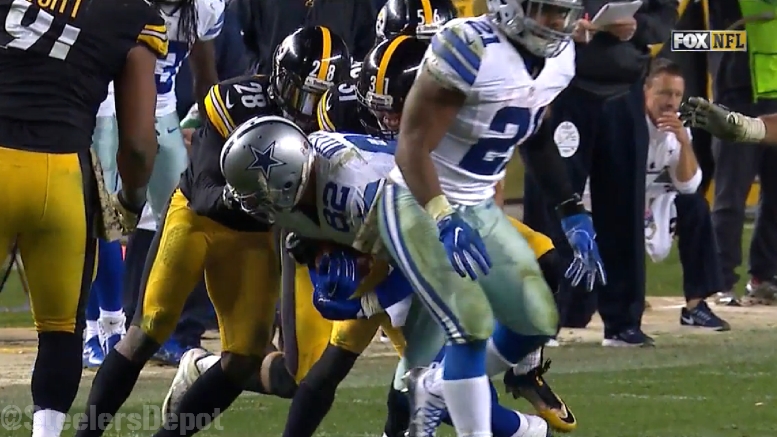 Anybody who watched his post-game press conference after the Pittsburgh Steelers lost on Sunday to the Cowboys in the waning seconds of the game following a go-ahead touchdown of their own with 42 seconds left saw the anguish on Head Coach Mike Tomlin’s face. He took it hard, the way the rest of Steeler Nation took it hard, not only because it was such an important win, but also because it was one that they let slip out of their grasp.

The 10th-year head coach laid out a number of issues that helped lead to the loss, but he singled out two crucial late-game personal foul penalties on the defensive side of the ball that helped to contribute to the Cowboys’ two final scoring possessions, which saw the lead seesaw back and forth.

Following a touchback after a drive on which the Steelers recaptured a 24-23 lead, on the first play of the drive with 7:51 remaining in the fourth quarter, the Cowboys got off a short pass that went for five yards.

The runner worked his way out of bounds, but cornerback Ross Cockrell decided to line him up to deliver a big, physical hit, assuming, perhaps hoping, that he would still be inbounds upon the impact. He was not, and it resulted in a 15-yard penalty. That moved Dallas from the 30 to the 45 and helped set the tone for what was a nearly six-minute touchdown drive.

The Steelers came back to score in a little over a minute, but another unfortunate personal foul penalty helped to enable another Cowboys score. On this occasion, Dallas had already approached midfield when rookie Sean Davis was attempting to strip the ball out of the receiver’s grasp after a five-yard reception.

Instead, he grabbed the facemask of the receiver enough to draw a flag, which ended up putting the Cowboys at Pittsburgh’s 32-yard line. That was 30 free yards on unfortunate penalties out of a total of 150 yards on those two drives, or 20 percent of the distance that they traveled.

On Tuesday, Tomlin called these penalties “catastrophic”, but he also called Davis’ penalty “a shame”, saying that he was simply trying to make a play. The head coach also acknowledged that the tape shows an undisciplined team, when asked in light of recent comments about a lack of discipline.

He said that the team, particularly the coaching staff, has “to make an accounting of that”, be he also resolutely stated, “we’re still very comfortable we can be a good football team”, and that “us acknowledging those things that have tripped us up is where we start”.

Tomlin believes that the team’s discipline issues have not been wholesale and rampant, but what he called “popcorn”, incidents that have popped up here and there at critical times that have contributed to the difference between wins and losses.

In part because of those catastrophic penalties that made it easier for the Cowboys to score two touchdowns in the final eight minutes of the game, the Steelers find their season approaching the level of catastrophe. It will take a collective effort from everybody involved to step away from the brink.