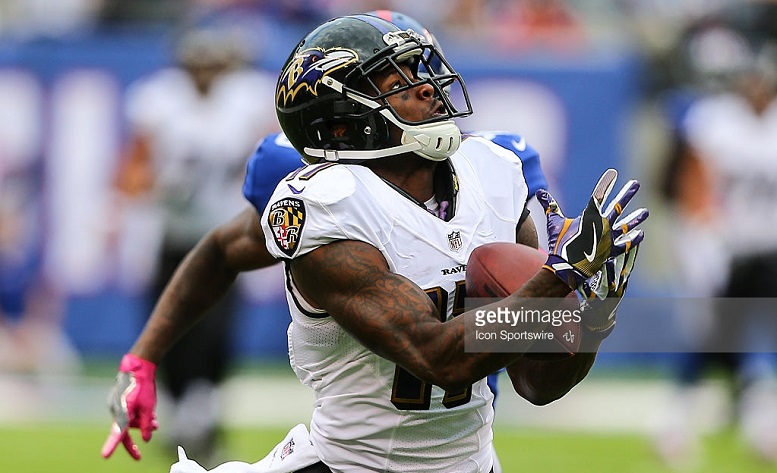 During the time that current Baltimore Ravens wide receiver Mike Wallace spent with the Pittsburgh Steelers early on his career, head coach Mike Tomlin often referred to the team’s former third-round draft pick as a “one-trick pony” and by that he meant he was only a deep pass threat. However, during his Tuesday press conference, Tomlin indicated that Wallace has perhaps added a few new tricks to his game.

“You see him doing Mike Wallace-normal-things in terms of stretching and getting behind the defense, but you also see him doing some new things, some things that I haven’t seen a lot of from Mike,” said Tomlin. “Some route running things, some underneath coverage attacking-things. He’s quickly developing a nice rapport with Joe [Flacco].”

Later during his Tuesday session with the media, Tomlin was asked what it is specifically that he’s seen out of Wallace that he’s gotten better at over the years and if those were the kind of things he was trying to teach to him when he was in Pittsburgh.

“I’m not acknowledging that he’s gotten better at anything,” Tomlin replied quickly. “I’m just acknowledging that you’re seeing him do some things that I haven’t seen teams that he’s been on ask him to do. Some underneath route running and so forth. Largely, he’s been a deep ball guy for most teams that he’s been on because of his unique traits. I wasn’t identifying it as any known area of weakness in his game, or play, or anything from that perspective.”

As you can tell my Tomlin’s response, he didn’t want any of his comments about Wallace to quickly turn into bulletin board material. With that said, he pretty much indicated that Wallace was indeed just a one-trick pony during his time in Pittsburgh and has since learned a few more.

While Wallace is still regarded as a player who can stretch the field deep, only 6 of 35 receptions so far this season have come via deep passes. Additionally, 8 of his receptions have come on 3rd down plays and 7 of those were successful plays.

As I pointed out in a recent post, Ravens quarterback Joe Flacco hasn’t had a lot of success so far this season when it comes to connecting with his deep passes. With that said, while the Steelers defense hasn’t been tested deep very often so far this season, they haven’t done a very good at defensing such throws when they happen.

Since leaving Pittsburgh for the Miami Dolphins via free agency after the 2012 season, Wallace has played against the Steelers just once and that happened in 2013. In that game, Wallace caught just two passes for 19 yards on five total targets in the Dolphins 34-28 win over the Steelers.

This coming Sunday, it will be interesting to see who the Steelers choose to cover Wallace for most of the game. Will cornerback Ross Cockrell follow Wallace around? We’ll see. Regardless of who winds up covering Wallace on Sunday in Baltimore, the Steelers defense can’t let him get the best of them with his best trick, which is still catching deep balls.