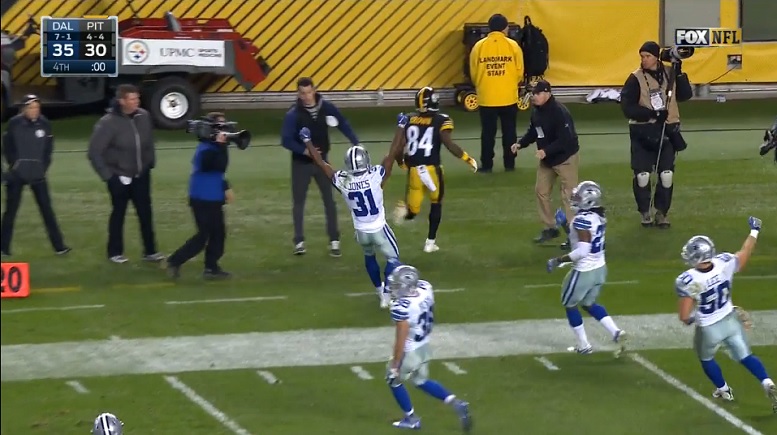 Over the course of the last several days there’s been a lot of discussion about the Pittsburgh Steelers final offensive play in Sunday’s loss to the Dallas Cowboys that included wide receiver Antonio Brown running out of bounds with no time remaining on the clock instead of getting rid of the football.

On Thursday, Steelers offensive coordinator Todd Haley was asked if he has plays designed for situations such as what happened at the end of the game against the Cowboys and if it’s an understood that players should just get rid of the football instead of just running out of bounds.

“Yeah, we have the plays,” said Haley. “We’ve used them before in the past in similar situations. Every Friday we go through our last seven and this past week we chose to go a certain direction, feeling like we had enough time to maybe get out of bounds on the first play and be within range of Ben [Roethlisberger] getting one to the end zone for the jump ball, which you see traditionally.

“But we didn’t get it far enough down the field, so now where in a little different situation, which we have plays for. We went with what we went with. There was discussion about how we wanted to get it done in a short amount of time and as we talked to AB after the game and on Monday and Tuesday, you can’t let the game end going out of bounds. I think that he understood that. Everybody else on the field understood it, you can see the line sprinting to get into the mix and we just can’t end a game by going out of bounds.”

While it’s not often that I get on Brown for obvious reasons, I really don’t understand why he just ran out of bounds on that play. I mean, what’s the worst thing that can happen if he just turns and throws the football backwards? At least the play would still be alive and while the Steelers were still unlikely to score just the same, crazier things have happened.

Brown shouldn’t have needed to be told anything either before or after the play as his common sense should have taken over after catching the football at midfield. Was there another teammate close to being behind him? No, not really, but when he saw that he was about to be cornered, he should have just got rid of the football even if it meant just blindly throwing it over his back. Do anything but run out of bounds on your own.