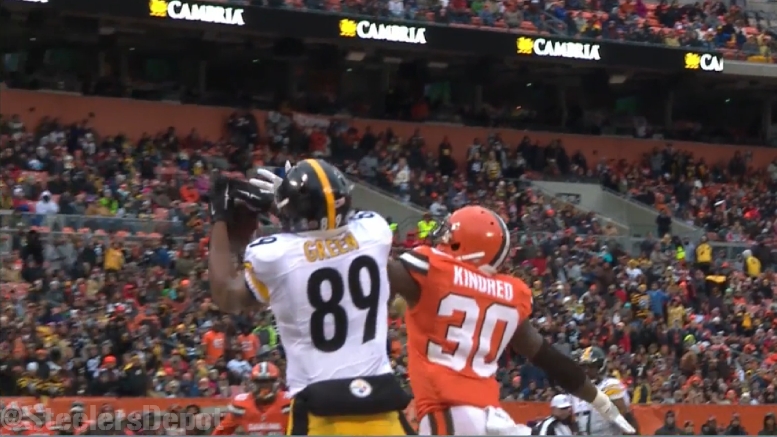 The Pittsburgh Steelers Thursday night game against the Indianapolis Colts will be the third one that tight end Ladarius Green has appeared in this season. Green, who missed the Steelers first 9 games of the regular season due to him rehabbing his surgically repaired ankle, has played all of 20 offensive snaps so far heading into Thursday’s game and he’s caught just 3 passes for 30 yards.

So, will we see Green play more against the Colts? Right now, it’s really hard to tell and Steelers offensive coordinator Todd Haley didn’t tip his hand much when asked about Green on Tuesday.

“He’s had a couple of games where he’s been out there, hadn’t had a ton of snaps, but he’s continued to have good weeks of practice,” said Haley. “I think just as we move forward, obviously, when he gets opportunities we’d like to see him take advantage of them.

“But the big thing was just as much time as he missed, we kind of kept him on a pitch count and games don’t always go exactly the way you think they’re going to go, or you plan on it, so I’d expect him ready to be ready to go a full-go this week.”

In case you’re curious, our charting shows that 5 of Green’s 20 offensive snaps have come on 3rd downs. His 3 receptions, however, have come on 1st and 2nd downs and he’s yet to be targeted on 3rd.

Thursday night, the Steelers offense will face a Colts defense that has struggled covering opposing tight ends so far this season. In fact, they have allowed the third-most receptions (62) in the league to tight ends entering Week 12 for 713 yards and 4 touchdowns.

Assuming Green is a full-go this week like Haley indicated, perhaps we’ll see the tight end have his “pitch count” increased some against the Colts as the Steelers are paying him too much money to keep him on the sideline three-quarters of a game.