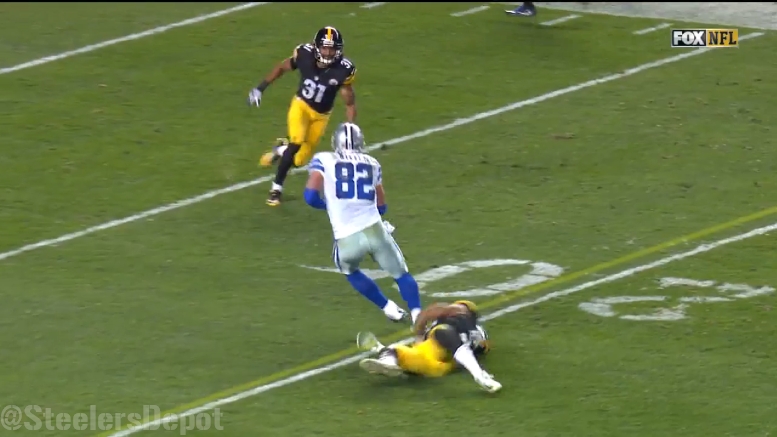 When you allow a team to score 35 points, there is a tendency to assume that there are a variety of causes that produced that effect, and in the case of the Pittsburgh Steelers’ 35-30 loss yesterday at the hands of the 8-1 Cowboys, that would certainly, in my estimation anyway, be a safe assumption.

While much of Dallas’ offensive success actually relied upon the explosive play—of their four touchdowns, three of them came on explosive plays of 32, 50, and 83 yards—underneath that splash-play blueprint was a backbone of consistent third-down success. And I’m not sure exactly where they stand at the moment, but I know that at one point this season, Dallas’ offense ranked at the top of the league in converting on third down at 50 percent.

They bettered their standing yesterday, assuming that their current rate was below 50 percent, but it was not much above 50 percent. The Cowboys successfully converted on seven of their 13 third-down opportunities. And a big part of the problem was that the Steelers were unable to get them behind the chains often enough.

Of their 13 third-down opportunities, six of Dallas’ plays run on third down came while they were just a yard or two shy of gaining a new set of downs. On the majority of these plays, they simply lined up Ezekiel Elliot behind their offensive line full of Pro Bowlers and moved on to the next play—although the defense did manage to stop Elliot once.

But it wasn’t just the third and shorts that killed the Steelers. The first down that they gave up on third and eight from their own 28-yard line with 2:50 left in the game was a back breaker, and the Cowboys scored the go-ahead touchdown on the next play.

Then there was, of course, the third and 11 play on which the Steelers were burned on a blitz attempt that allowed Dez Bryant to get behind rookie cornerback Artie Burns, which resulted in one of those aforementioned explosive scores, this one going for 50 yards.

Another 12-yard reception to Bryant on the previous drive converted on third and seven from the 33-yard line that eventually set up a 46-yard field goal attempt that at the time cut the Steelers’ lead down to just two points.

So it wasn’t always the guys in the trenches who were not getting the job done when it came to holding the Cowboys on third down. There were many short-yardage opportunities, and they didn’t get a lot of stops in those situations. But the defense also allowed some long conversions that were equally problematic.

A lot of people seem to want to dismiss the abilities of Cowboys rookie quarterback Dak Prescott and what he accomplished yesterday and over the course of the season. But it doesn’t matter how good your teammates around you are. If you are one of the best teams in the league in converting on third down, then you are doing something good at quarterback. Prescott is poised, and has his teammates poised. They build on that. And they believe they’ll convert every third down.