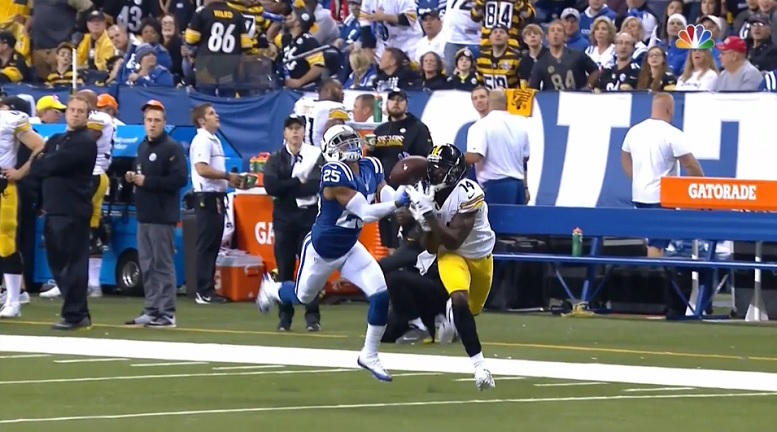 During his weekly press conference a few days ago, Pittsburgh Steelers offensive coordinator Todd Haley talked quite a bit about wide receiver Sammie Coates and his attempt to overcome his two broken fingers that he suffered earlier in the season.

“You got to catch your way back to confidence,” Haley said of Coates.

After barely playing any offensive snaps in the Steelers previous two games, Coates saw the field a little more in Thursday night’s win over the Indianapolis Colts and yet still failed to register a reception on the three passes thrown his direction from quarterback Ben Roethlisberger.

The first time that Coates was targeted Thursday night came with 7:25 left in the second quarter when Roethlisberger attempted to connect with the former third-round draft pick deep down the left side of the field with Colts cornerback Patrick Robinson running step for step. While Roethlisberger’s pass was a little under-thrown, Coates made no attempt to elevate and Robinson was able to safely prevent the completion.

With 10:04 left in the third quarter, Roethlisberger again went deep to Coates only this time it was down the right side of the field on a 3rd and 2 play. Colts cornerback Darius Butler was covering Coates this time and while Roethlisberger’s throw was once again a bit short, Coates never attacked the football and it fell harmlessly to the ground.

Roethlisberger went to Coates again with 9:31 left in the fourth quarter on a 3rd and 12 play and while the quarterback’s throw wound up being wider than probable intended on the out-breaking route, Coates let it bounce off his outstretched arms while diving for the pass just past the first down marker.

Since breaking his fingers way back in Week 5, Coates has been targeted a total of 14 times and only has one catch for 4 yards to show for it. The Auburn product started the season by catching 19 passes for 421 yards and two touchdowns. Five of those receptions resulted in gains of 41 yards or more.

With Coates struggling to catch the football and fellow Steelers wide receiver Darrius Heyward-Bey sidelined for the last several weeks with a foot injury, the Steelers offense has been failing when it comes to completing ultra-deep passes down the sidelines. Luckily, wide receiver Antonio Brown and tight end Ladarius Green provided several deep receptions Thursday night in the team’s win over the Colts.

The Steelers absolutely need to find a way to get Coates back on track like he was in their first five games of the season.

“Mentally he’s doing well and physically he’s doing well,” Haley said earlier this week. Other than that, so we just got to see how the confidence is going because more than anything that’s what gets you his confidence. And just trying to get him back to where he’s confident to go out there and make plays for us, because we need them.”

As of Thursday night, the only big plays that Coates is making right now is on special teams and they certainly didn’t draft him to do just that.