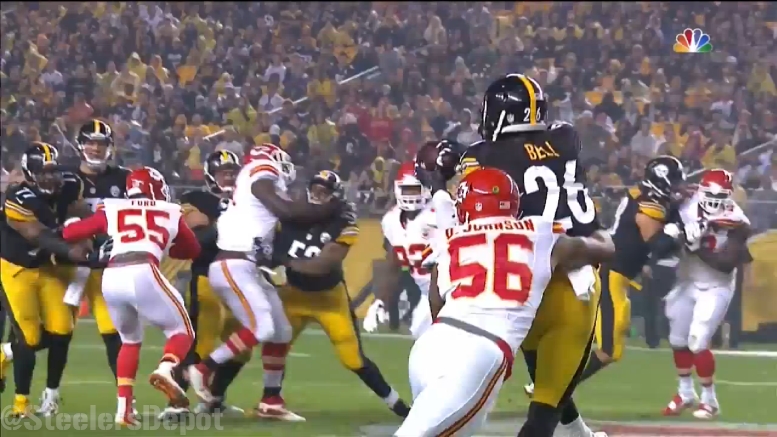 Le’Veon Bell is a running back for the Pittsburgh Steelers. He spent the first three games of the season off of the field while he was serving a suspension. He currently ranks 19th in the league in receptions with 57.

Le’Veon Bell is a running back. I should probably say that twice, just to be sure.

Bell actually has more receptions than Cardinals running back David Johnson, who is really the only other player in the league that has a skill set comparable to him as a runner and a pass catcher. Johnson actually does have a comfortable margin when it comes to receiving yards, though.

Johnson leads all running backs with 613 receiving yards, and that includes his 103 receiving yards on eight catches that he had just today in a loss to the Falcons, the first 100-yard receiving game of his career, though he also had 98 yards through the air earlier this season. He has a receiving touchdown in each of the past three games.

Bell is actually coming off a ‘bad’ game for him as a receiver, as he only caught four passes for a mere 22 yards. But this was also a game in which the Steelers only threw 20 passes or so throughout the entire game, as they were more focused on running the ball—and, of course, he rushed for comfortably over 100 yards in the game at a healthy clip per rush.

The only other running back who is really even close in production has been Duke Johnson of the Browns, who is yet another running back who coming out a couple years ago was drawing comparisons to none other than Bell. So it should be no surprise that they are following him in that regard as dual threats.

Heading into Thursday’s game, Bell was actually averaging more receptions per game than was Antonio Brown, who leads the league in receptions through three weeks. And, again…he is a running back. And he missed the first three games of the season.

I think the Steelers are going to need him to produce more than four receptions for 22 yards on Sunday when they host the Giants, because they have a defensive unit that is going to be able to limit him on the ground, and their cornerbacks have the athleticism to harass Pittsburgh’s wide receivers.

It wouldn’t surprise me in the least if Bell had a big game as a receiver in six days, because I think that is going to be what the defense gives them. It may just be a matter of them being smart enough to take it.