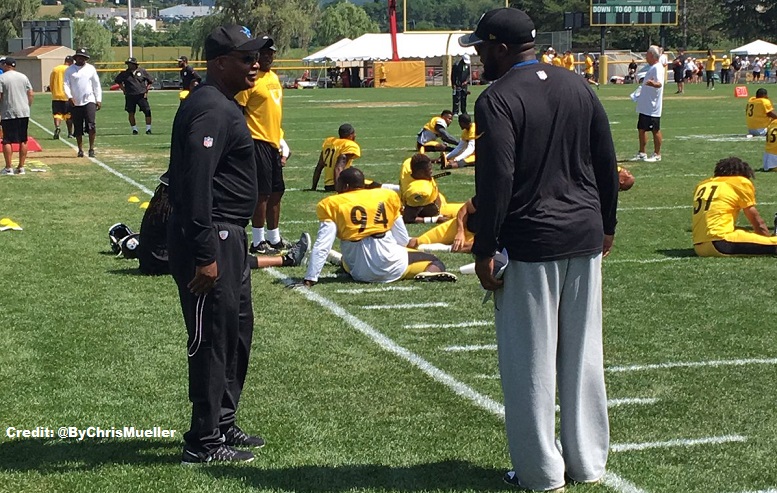 Read this and then feel free to chuck your computer out the window. That’s what I’m planning to do.

Ryan Shazier: Shazier flew around the ball today with excellent diagnosis and producing some splash plays. He forced a fumble and nearly picked off a screen pass. He finished the day with nine tackles and a sack. Shazier played a big role in limiting the Ravens’ rushing attack, which had their moments, but was generally held in check and had several negative plays.

James Harrison: Harrison picked up his first two sacks of the season, including a forced fumble, two very timely plays for Pittsburgh. He beat up on rookie Ronnie Stanley with his classic dip/rip around the edge and like Shazier, did his role against the run. Going to need a lot more of that going forward.

Keith Butler: Credit to coach, he played a whole lot more aggressive this week than probably any other game this season. It created the first interception by a defensive back all year, Artie Burns’ pick created by Mike Mitchell pressure. The defense was far from perfect but generally played good-enough football for this offense to win. If the offense wasn’t with the JV unit.

Ben Roethlisberger: Just bad. Awful. Get screamed at by Gordon Ramsay incompetent. Some late game action when the Ravens seemingly relented padded the stats but it doesn’t change the overall performance. He was inaccurate, hesitant, and flat out missed wide open receivers on a consistent basis. It’s the only argument against the game Todd Haley called; Roethlisberger’s execution was putrid.

It was better at the end but too little, too late.

Combination of all the bad omens. Bad on the road, bad vs Baltimore, bad from injury. And it created one big ‘ol dark cloud, for Ben and all of those who watched.

Run Game: You can pin that mainly on the offensive line and Haley, who tried to be creative but wound up being too stubborn of running on the Ravens’ interior line. The Steelers were bullied at the line of scrimmage, giving Le’Veon Bell zero room to try to make a play. It’s not a big surprise but with Roethlisberger’s play, made for one of the worst offensive performances in a decade.

Pittsburgh finished the day with 19 yards on the ground, 1.2 per carry. Their longest run was four yards.

Danny Smith: Oh Danny…it was not a good day. There are a lot of individual problems but with four special teams penalties and a blocked punt, it falls back on coaching. Especially out of the bye week. The 12 men on the field, giving Baltimore the chance for a 49 yard field goal instead of 54, was squarely – and indefensibly – on him. He has openly talked about being in charge of getting players on and off the field so they can just focus on playing. And there, he failed.

Then there was the Chris Boswell onside kick. Which was…a thing. Or something.

There will probably be talk about Smith being fired, and I can understand it, though there doesn’t seem to be a replacement for him on staff. Going out of the organization is very unlikely.

Todd Haley: Yup, bad game, and I rarely include coaches on here. You can add everyone but Keith Butler today. Roethlisberger was poor, and that played a role, but Haley kept running into the teeth of the Ravens’ defense despite its failure time-and-time again. We’ll have to take a deeper dive into things but a “below the line” performance today.

Mike Mitchell: I know many of you will be happy to see him on this list. Mitchell settled down, I guess, but the first quarter was as bad as it gets. Couldn’t make a tackle in the open field and got dusted by Mike Wallace on the 95 yard touchdown. The positive plays were few and far between, if there were even any. Rough, rough day.

Mike Tomlin: It’s sometimes difficult to put things on a head coach that doesn’t call one side of the ball but you can usually tie penalties and general poor discipline to the top. So Tomlin gets on the list after a 13 penalty game, including ten at the half. Weren’t too far away from the all-time record of 17.

There’s a lot more you can say. I’ll let you do it in the comments. Godspeed.

Sammie Coates: Lower down on this list but he needed to make the end zone catch late in the 4th quarter that would’ve made it 21-14. He dropped it and Pittsburgh would turn the football over on downs. It was a great call by Haley but incomplete. His hand injury is no longer an excuse.

Coates was targeted five times but finished without a catch.