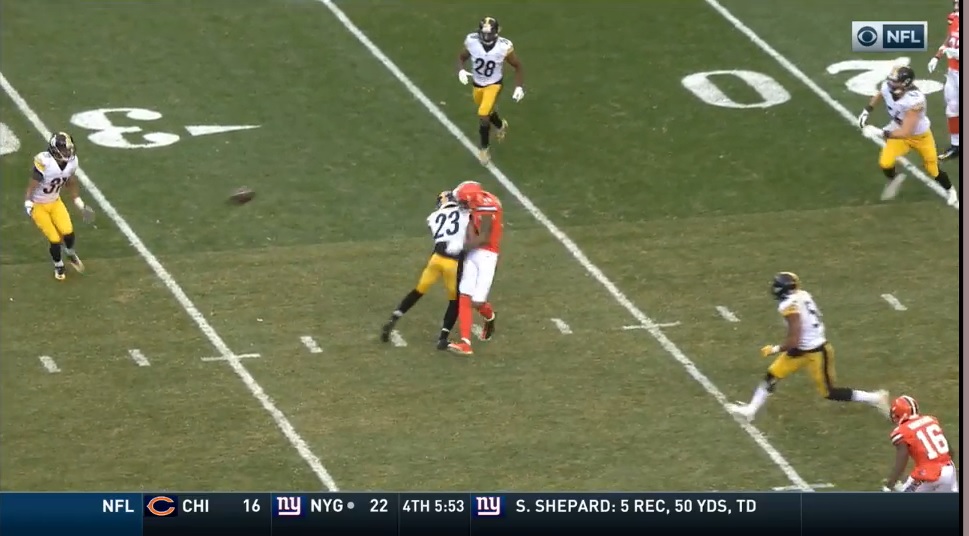 It wasn’t the most comfortable win but did you really expect anything different? I didn’t. But it’s a Pittsburgh Steelers’ victory. And that feels good to say again.

Le’Veon Bell: There’s being a workhorse and then there’s what Bell did today. 36 touches, a career high, and he did almost all his damage through the air in the first half. He ran tough, he was shifty, he was a safety valve for his quarterback. By halftime, he already had more yards than he did in the entire Dallas Cowboys game.

Truly one of the unique talents in the game. I can’t think of another back like him today.

Stephon Tuitt: He was our X-Factor coming into this week and he certainly answered the bell. He finished the day with 2.5 sacks, four QB hits, and a couple of bonecrushers downfield, including one late on Josh McCown. Call him the chiropractor. The Browns’ rushing attack, which was basically bypassed, was shut down too.

Offensive Line: Give some love to the boys up front. Ben Roethlisberger was kept clean, no sacks in 36 dropbacks, and the Steelers averaged over five yards per carry on the ground. All five played well, I don’t think you can pick out any one player who was more or less spectacular than the other on first glance. All were solid.

Ryan Shazier: Another day at the office. He’s the most explosive athlete on the field, closes better than anyone else, and was rewarded with 2 TFL and a sack. Shazier had the forced fumble in the fourth quarter to salt the game away. When he’s healthy, life is good. Right now, life is good.

Lawrence Timmons: There was a stupid hands to the face penalty on third down but man, Timmons was playing like it was 2010 today. Several blows that would make Ali wince, including a forced fumble that was negated at the game’s final minute. A tone setter and a guy you shouldn’t forget about; he’s having a really strong season.

Mike Mitchell: Ok, deep breaths. I know he isn’t most everyone’s favorite around these parts but he, like Timmons, was one of those tone setters. He had a couple big smacks over the middle. Corey Coleman and Terrell Pryor are going to remember who this guy is in their next meeting. He finished second on the team with six tackles.

James Harrison: The whole defense getting love today. Harrison is on here by virtue of breaking Jason Gildon’s all-time sack record. Congratulations are in order. And more Harrison means less Jarvis Jones. So double the congratulations.

Keith Butler: And a final defensive nod to the man calling the plays. His outfit suggested someone hopelessly lost in a scuba class but he called a great game. Mixed his four and five man pressures, a blend of what this team wants in an ideal scenario and what the team needs right now to win.

Chris Boswell: Rounding things out with special teams love. None of his kicks were from a far distance but in today’s weather conditions, wind and snow, a 3o-something yarder is nothing to sneeze out. He produced points when the offense stalled out and continued to be a steady, reliable presence.

Artie Burns: Burns got better late in the game but the touchdown to Gary Barnidge seemed directly on him. Burns can’t allow the inside release when he already had outside help. That’s a reason why Keith Butler has been hesitant to blitz. Too many breakdowns behind it.

Ross Cockrell: He wasn’t targeted a lot by sheer virtue of the Browns not having many first half snaps but he got beat up a bit by Pryor. His first two targets went for big gains and Cockrell’s lack of physicality was evident again.

Young Receivers: Not their best effort. Jesse James, Cobi Hamilton, and Eli Rogers all had trouble finishing plays. Points and chances left on the board. Not all those catches were easy, mind you, but in the NFL, spectacular plays are going to be required to beat teams who aren’t in the funk Cleveland is.

James seemed to do well as a blocker though. Credit for that.