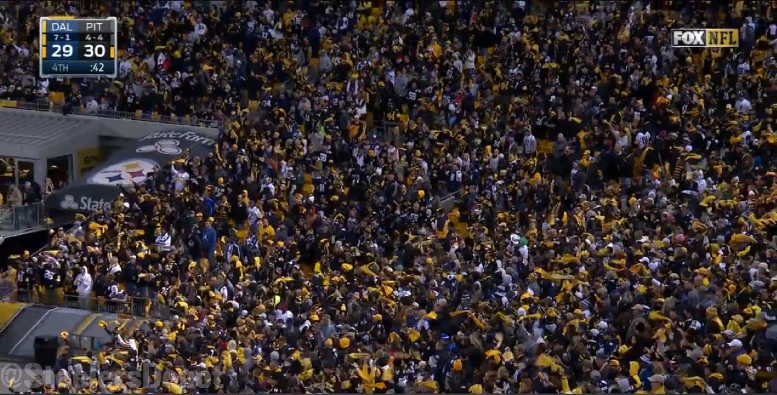 There is a lot of anger surrounding the Pittsburgh Steelers right now. The fans, as usual, are angry, and are demanding blood. The media is angry. The coaches are angry. The ownership is angry. The players are angrier about this four-game losing streak than anybody else, because they are the ones taking the field and losing the games.

But they still came out in record numbers. The Steelers set a new attendance record for home games for yesterday’s game hosting the Cowboys when it was announced that they had 67,737 people watching along in the stadium, according to Bob Labriola.

While it is fair to point out that a healthy segment of those people came out specifically because the Steelers were playing the Cowboys—either because they particularly hate the Cowboys, or because they are fans of the Cowboys and were coming to see them—the fact is that this is a Pittsburgh team that through the midway season was already 4-4. But they still came out.

And most of you are still coming out and joining us here on a weekly, if not daily basis. Evidently, some of you are coming here to let us know that we have to fire Head Coach Mike Tomlin, along with most of the other coaches, release several players, and trade the others for first-round draft picks.

Of course, there are not many things worse than a four-game losing streak, aside from losing streaks of an even higher number of games, and perhaps a serious injury or two. But there should truly be better things on the horizon, and I think there is justification for that. The Steelers just completed what should be their most difficult schedule run.

And a lot of that difficulty was, of course, impromptu, brought on by the sudden knee injury suffered by Ben Roethlisberger. The Steelers have lost every game since then, after all. But in that span, they also played the two best teams in the league, as well as a tough divisional rival on the road, where they have never fared well.

My suggestion is that you give it more time before you turn you back on the season. Should the Steelers be looked at as a top Super Bowl contender right now? Well, that would probably be pretty hard to argue, and even I won’t make that argument. Now, if they drop next week’s game in Cleveland, then we can talk.