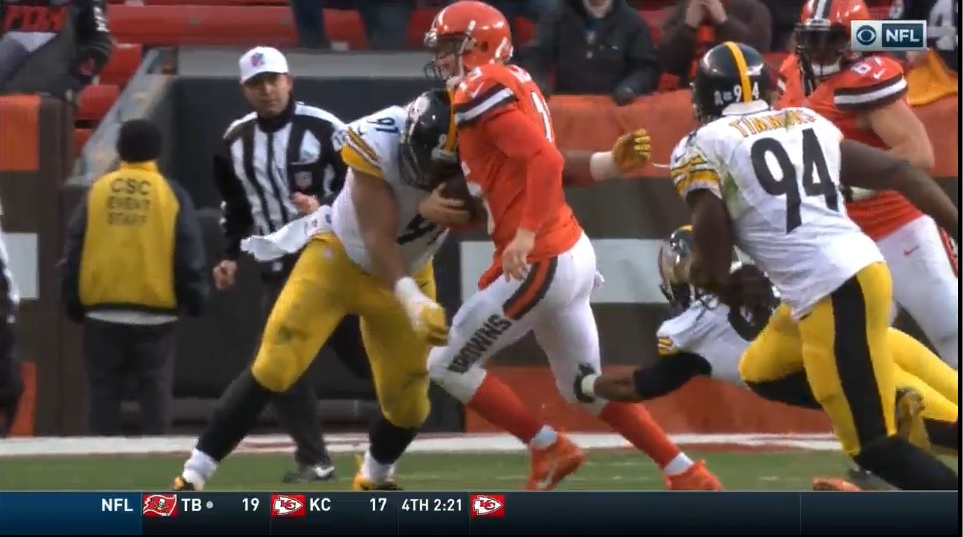 Pictures are worth 1000 words. So these clips might be valued at a million.

But if you’re a Cleveland Browns‘ fan, you might want to look away. It might hurt you more than it hurt these players.

Yes, the Browns are among the worst in the league. There will be much tougher offenses ahead. But that doesn’t mean you can ignore or dismiss the mentality the Pittsburgh Steelers played with. Mentality has nothing to do with the opponent. The Steelers’ stepped up on defense and made their presence a very loud one.

There’s the stat line: eight sacks, the most since 2005. Holding Cleveland to 33 yards rushing. But there’s plays the boxscore won’t show you. The physicality, the hard hits, the plays that are just plain fun to look at. No in-depth analysis required, I promise.

The three plays I’ve picked all come from late in the game when the Steelers put their foot on the Browns’ throat but it was a mentality consistent throughout the game. Pittsburgh was the more physical team. And it’s what won them the game.

You might not like Mike Mitchell but it’s impossible to deny his presence as a big, physical hitter over the middle of the field. He reaffirmed that today with two blows to Corey Coleman and Terrelle Pryor. Here’s the second one, a nasty shot into Pryor’s ribs that left the receive on the ground for several moments.

Mitchell would wind up checking up on Pryor who would return the next series. But that’s a hit he’s sure to remember in their next meeting.

On the first play of the next drive, Stephon Tuitt again greeted Josh McCown. Here’s how he finished a six yard scramble by the Browns’ quarterback.

Tuitt was the enforcer the Steelers needed and had a breakout game of the season, finishing with 2.5 sacks, the most he’s ever had in a single game.

Though this final example was negated by a Daniel McCullers’ penalty, it won’t be one Duke Johnson will forget. Lawrence Timmons led the team in tackles, including this monster hit on 4th down that knocked the ball loose before being returned for a touchdown by Sean Davis.

The Steelers played fast, furious, and with one heck of an edge. If they can carry that over through the rest of this stretch, they’ll be in position to capture the AFC North.

I don’t know if Jack Lambert is capable of smiling but I like to think he at least grinned watching this team play yesterday.