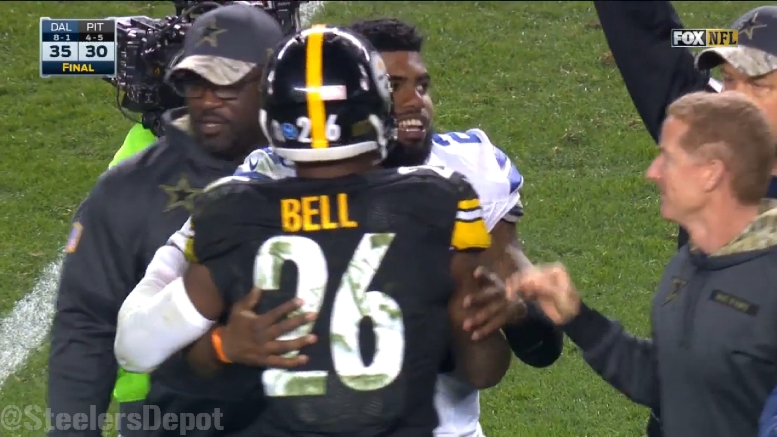 A couple of years back, Patriots head coach Bill Belichick gained some added notoriety for his approach to a press conference in which he was receiving some questions that were less than desirable to answer by saying, “we’re on to Cincinnati”, summing up his sense that as a team, New England was moving on to the next game they can win.

Just last month, he revived that mantra by saying, “we’re on to Cleveland”, this after they came off a blowout loss—with their third-string quarterback—on the heels of a blowout victory the week prior. And now the Pittsburgh Steelers are on the Cleveland as well.

It seems that Ohio is the place to go when you want to get away, presumably with a Snickers™ bar in your hand, ready to calm things down. While the Steelers were up against a tough opponent yesterday—the Cowboys can easily be argued to be the best team in the league, with the Patriots the other contender for that title even in a loss at home yesterday—their loss was a brutal blow to both themselves and to the fan base.

They had the game in their grasp. After all, the lead changes hands six or seven times. They led for most of the game. They scored a touchdown five minutes into the game, briefly lost the lead in the second before gaining it back soon after, and then the Steelers and Cowboys swapped the lead throughout the fourth quarter with an exchange of touchdowns in the late moments of the game.

But there is nothing that Pittsburgh can do on Monday morning, or Tuesday afternoon, or Saturday night, that will do anything about the Steelers losing yesterday to the Cowboys. That is a done deal, and the loss will be recorded in their record books for the remainder of the existence of said record books.

And so the only thing left to do is to move on to Cleveland. When it comes to the team, that should be their focus already, especially when you consider that they have not won a game in five weeks, given that they have lost their last four games and had their bye week within that span of time.

The Browns have the appearance of low-hanging fruit, if you consider that they boast a 0-10 record at the moment, which is the worst start that they have ever had in the history of their franchise. They have three quarterbacks, which means that they do not have any quarterbacks.

The Cleveland game has to be the get-right game that sets up this team for the home stretch, the final six games of the season. Get that first win back under the belt, and then look ahead. Following Cleveland, they are hosted by the Colts, then host the Giants, and then are off to Buffalo before finishing with a game apiece against each division rival. The final game against the Bengals will be their ‘on to Cincinnati’ game, hopefully following a win over the Bills, and then they finish with two home games. But the rest of the season starts in Cleveland.