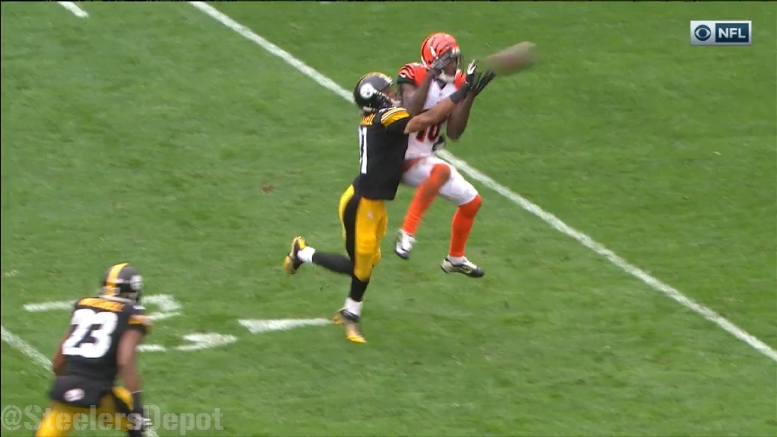 I know, I know. Technically, we’re not at the halfway point of the season. That’ll happen after Sunday’s game. But with the election coming up and a potential loss to the Baltimore Ravens, 95% of our viewership might have chucked their computers out the window. So we’re going to talk about this now coming out of the bye week.

Probably not going to talk about team MVP because that comes down to a few obvious names. Hopefully the more interesting argument is the headline, the biggest surprise and disappointment of the first seven weeks. I’ll throw out a couple candidates for each and let you guys vote below. Throughout the day, I’ll tally up the results.

We’re not including players who have been oft-injured this year. Too easy to say and add them.

Ross Cockrell – Becoming the starter is no surprise. But Cockrell is inarguably the team’s #1 cornerback and been asked to shadow and try to shut down top targets. The results have been a mixed bag but overall very good on the realization of who he’s faced. Shut down A.J. Green Week Two, recovered well against Brandon Marshall in Week 5.

B.J. Finney – He only played about six quarters but they were entirely impressive. So much so that he probably gave comfort of having a long-term replacement for Ramon Foster, whenever that may be. It was a small sample size but I had trouble finding any flaws in his game. He was strong, both as a run blocker and handling bull rushes in pass protection, with a surprising amount of athleticism in the open field.

Tyler Matakevich – This is for everyone who’s been on the Dirty Red bus since the day he was drafted. He’s immediately become a core special teamer and done well in that role. In the barely-more-than-a-quarter of action on defense he saw against the Miami Dolphins, he finished with nine tackles. He may have been a little slow in his reads and to get off blocks but he looked as technically sound as a tackler as anyone on the field.

Jordan Berry – Berry has had a breakout campaign not for the booming punts he’s had, and there have been several, but for the level of consistency he’s shown. He was the best player on the field in the Steelers’ Week Two win over the Cincinnati Bengals, excellent in distance, hangtime, in placement in some ugly weather.

Stephon Tuitt – It’s not that he’s playing terrible but I don’t think anyone anticipated Tuitt being held sackless through the first seven games. But that’s where he’s at, a year after coming off a 6.5 campaign in just 14 games. And with the run defense in shambles the last two weeks, again, far from solely his fault, it’s hard to point to much that say he’s taken a step forward. Hopefully he turns things around the latter half. He needs to.

James Harrison – You could put really any of the outside linebackers on here but Jarvis Jones has been apart of more splash plays of late, Arthur Moats’ expectations weren’t as high, and Harrison is viewed – still correctly, to me – as the best healthy pass rusher on the team. But like Tuitt, he’s been held off the stat sheet in sacks for a team that desperately needs it.

Alejandro Villanueva – Great story, made strides last season. But it’s been an inconsistent ride this year and I don’t think he has taken the steps that I thought he would. His technique in pass protection is still poor at times, stopping his feet and/or doubling over, and pass rushers have exploited his height, getting into his chest and driving him back. He leads the team in penalties this year too and that stats surprises me as much as any other.

David DeCastro – I think DeCastro has improved a great deal from the stretch he had around the first month but it’s fair to say he’s struggled more noticeably and again, surprisingly, than Villanueva has. He’s second on the team in sacks and penalties, 2 and 4 respectively.

Be sure to check us out on Facebook and like the Steelers Depot page at the link here.