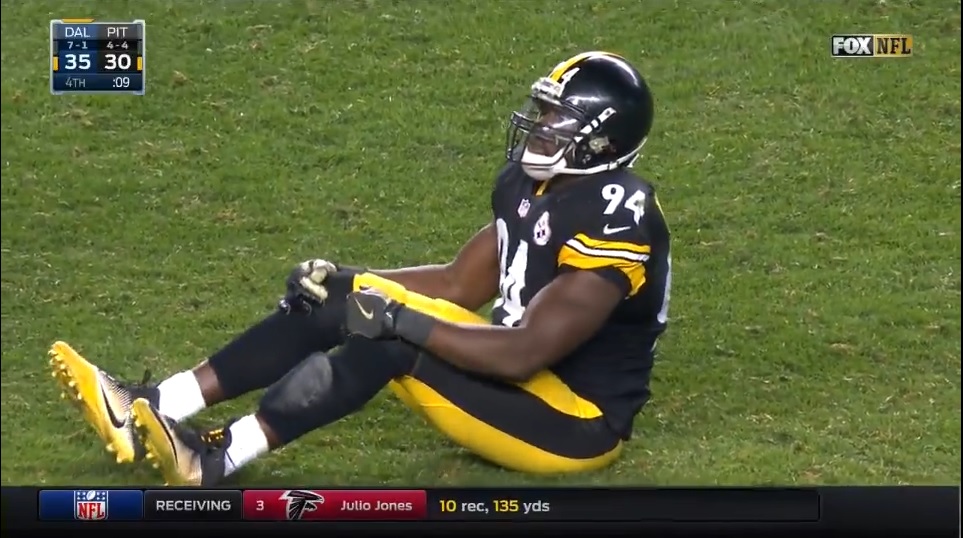 The Pittsburgh Steelers took on the 7-1 Dallas Cowboys Sunday afternoon, and it was a doozy. Walk away from the ledge of that cliff, and take a quick read on how this all came to be; the Cowboys beat the Steelers in a nail-biter, 35-30.

The game started off with a bang, and something Steelers fans are accustomed to seeing. Anthony Chickillo came off the edge as Dak Prescott was flushed out of the pocket. The stripped sack resulted in a Ryan Shazier recovery, which allowed the offense to do what they do best. Ben Roethlisberger and co. strung together an 8 play, 38 yard drive that was capped by a Le’Veon Bell 2-yard touchdown reception. Like Mike Tomlin has done in the past, they attempted an unsuccessful 2-point conversion, and the lead stayed at 6-0.

The Cowboys replied with a drive of their own, to the tune of a 9 play, 47 yard drive that stalled in the Steelers’ redzone; the bend-but-don’t-break defense reared it’s head, again. Dan Bailey’s 37 yard field goal cut the lead to 6-3.

Eli Rogers was a big factor in the Steelers following drive- he hauled in a 22-yard catch down the middle, and eventually caught the 3-yard touchdown reception to extend the lead to 12-3, after yet another unsuccessful 2-point conversion- I image Steelers fans were shaking their collective heads everywhere. Ben, however, went 4/4 for 47 yards on the drive, which was nice to see after a bleak display last week.

Brace yourselves- the ever-back breaking splash play made an appearance. The Steelers’ defense allowed an 83-yard screen pass to Ezekiel Elliott, which made the game 12-10. Defenders were flailing themselves at ‘Zeke as he outpaced Mike Mitchell (yet again) towards a score.

The Cowboys followed it up with a 53-yard field goal to begin the second quarter. This capped off a 6 play, 30 yard drive, which saw the Cowboys take the lead for the first time in the game at 13-12.

Chris Boswell replied with a field goal of his own, to the tune of 39 yards; that capped a 10 play, 39 yard drive that saw Roethlisberger leave the game after taking a whallop to the back and head area- he did, however, return and looked absolutely fine. Very Ben-esque. The lead returned to the Steelers, 15-13.

The first half starts were definitely in favor of the Steelers, as the Cowboys only had 6 first downs to their 17. The Steelers also went 50% on 3rd down (3-6), while the Cowboys went 1-5. The total yardage was relatively even, at 169 (Pittsburgh), and 146 (Dallas).

After receiving the second half kickoff, a pass-interference filled (or lackthereof) drive resulted in a 25-yard Boswell field goal, extending the lead to 18-13.

The following Cowboys’ drive was halted thanks to a now rare James Harrison sack, which came on a clutch 3rd and 4 and thus resulted in a 46 yard field goal. This drive lasted a grueling 14 plays, and thankfully only ended with 3 points- lead cut to 18-16

The splash plays, yet again, made another appearance (stop me if you’ve heard this before).  Dak Prescott hit Dez Bryant for a 50 yard touchdown reception, after beating rookie Artie Burns on single coverage. It was a back-breaker, as the lead changed in favor of Dallas, 23-18.

A 6 play, 46 yard drive was the Steelers’ response, which was capped off by a 2-yard Bell run- now, for the negative. As the Steelers set the tone early in regards to conversions, they yet again tried for 2; the ball was in the air headed towards Jesse James, but was “intercepted” by Fitzgerland Touissant and batted to the ground. The confusion lead to a failed 2-pointer, and the game flipped again to 24-23.

Elliott would return the favor, running in a 14 yard play towards the endzone, which was also followed by an unsuccessful 2-point conversion. Dak went 6/6 for 48 yards on that drive, and it was clear the secondary was hurting.

This is where Steelers fans everywhere had a heart attack. After pushing down the field, Ben called a gutsy fake-spike toss-up to Antonio Brown, making the game 30-29. AB hauled in the 15 yard reception, leaving Heinz Field rocking- surely the Steelers would win, right?

Wrong. The Cowboys put together a drive of their own, keeping in mind the time-sensitive nature of the game. Sean Davis would be called for a crucial face mask penalty, propelling the Cowboys 15 more yards down the field. As Steelers fans were hoping for a stop and a field goal, it would be ‘Zeke who would crush their hearts. A 32-yard run into the endzone ended the game, and the final of 7 lead changes, for a score of 35-30.

After dropping the game 35-30 to the Cowboys, the Steelers look to snap their losing streak next week against the Cleveland Browns. Let’s hope it turns out a bit better than today.