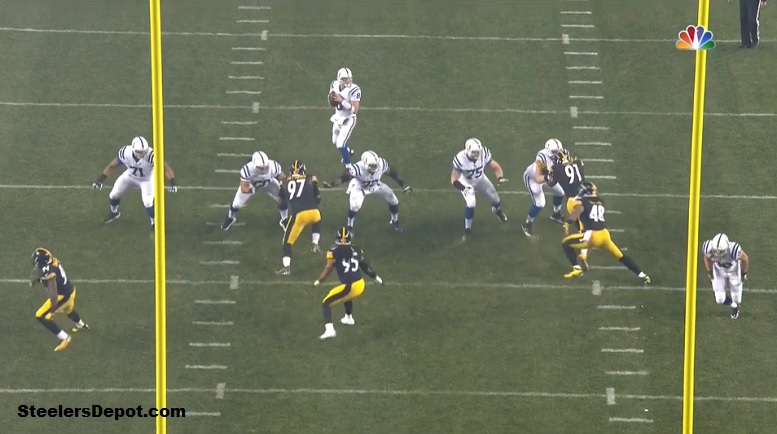 Forgive me in advance for the excruciatingly obvious pun that will follow.

The last two times the Indianapolis Colts have faced the Pittsburgh Steelers, they have run short on Luck—that is, their franchise quarterback, Andrew Luck, who, including today’s game, will now make it back-to-back seasons in which he has missed a game against Pittsburgh.

And the last time that happened, the Steelers had a specific way of targeting Luck’s backup. When the Steelers faced Matt Hasselbeck to open the game, they did not use the “sic ‘em” strategy of sending a heavy dose of blitzes down his throat. Instead, they dropped eight into coverage frequently.

And it worked. And then the pass rush opened up late in the game as the Colts had to press. And they ended up knocking Hasselbeck out of the game, before then bringing his backup, Charlie Whitehurst, down a couple of times.

Now, their backup is Scott Tolzien, a quarterback of even lesser experience and talent than the aforementioned, so I would not be surprised at all if we see Keith Butler’s defensive unit employ a similar strategy today of emphasizing confusion down the field in coverage rather than up front with the pressure packages.

This would be in contrast to the past three weeks, considering that Butler has significantly ramped up the frequency with which he blitzes, not only in general, but also with five-man pressures. He showed a variety of pressure looks on Sunday against the Browns, but we may anticipate seeing, instead, a variety of coverage looks today in its place.

Last year, against the Colts, the Steelers sent only three pass rushers about a dozen times. They also rushed five about 15 times, but the majority of those opportunities came late in the game, when the outcome had more or less already been determined.

The Steelers also sent four rushes roughly in the same ballpark figure that they sent three and five rushers, but they never sent more than five. They blitzed only 13 times in total during the game, and that included the final four snaps.

Hasselbeck told reporters after the game that he was not prepared for the coverage looks and the numbers in the secondary that the Steelers were presenting him, and he and the Colts offense struggled to adjust to what they were doing on defense throughout the game. They also used this coverage strategy with positive effect earlier in the year.

We will see if this is the strategy that Butler employs later tonight, after everybody has put away a few pounds of turkey and other assorted sides, but it would be in keeping with what we know about his tendencies over his relatively short tenure as defensive coordinator.