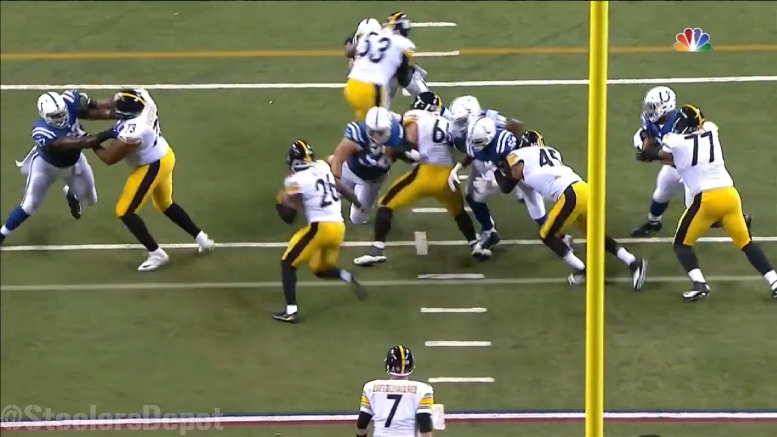 Roosevelt Nix hasn’t been much of a presence for the Pittsburgh Steelers this season. At least, he had not been until Thursday’s game against the Colts, during which he played what was by far a season high in snaps—in the team’s fewest total offensive plays of the year—logging over a dozen snaps.

Nix, obviously, spent the early portions of the year battling a back injury, an issue that had lingered since training camp. It took most of the season before he even managed to get back on the field, and it took even longer for the team to really work him in as a contributor.

But after watching him against the Colts, it seems pretty clear to me that he is a pretty important part of what they want to do in the ground game going forward, as he played the role of lead fullback on numerous occasions, and did so with relish.

He was on the field for the Steelers’ second play of the game, with the team moving to a 22 look. After initially lining up to the left, he moved to the right side, but off the snap led left, picking off the end man on the line of scrimmage with a diving cut block that opened up the left end and led Le’Veon Bell to an easy 10-yard gain.

Many of the team’s successful runs on the evening shared the common theme of Nix serving at lead blocker. Another run later in the first quarter featured the fullback pressing the right-side B Gap and sealing off the inside linebacker for Bell to slip behind.

One issue that he did have, in an area of the game in which he did not get a lot of work, was in pass protection. He surrendered a pressure that forced an incompletion a couple plays after the previous run off an edge blitz, overcommitting to the outside and letting the blitzer slip inside.

Late in the first half, Nix had two great blocks in the row from off the Steelers’ goal line, but, unfortunately, the first one didn’t count. He executed the same block as the second play viewed above, springing Bell for 21, but a hold brought it back. So he just did pretty much the same thing on the following play, only this time Bell was only able to pick up eight yards.

There were several other plays that I had marked down as a potential play to analyze here, but the last one I want to look at comes in the fourth quarter, and I want to look at it because it shows Nix using critical thinking.

This was a run that featured not just a lead fullback, but also a pulling guard. Understanding that, Nix took on one defender knowing that the guard would be following in behind him to pick off the other. The two together created a hole for Bell that went for seven yards, and it would have gone for more if he didn’t trip over his own lineman.