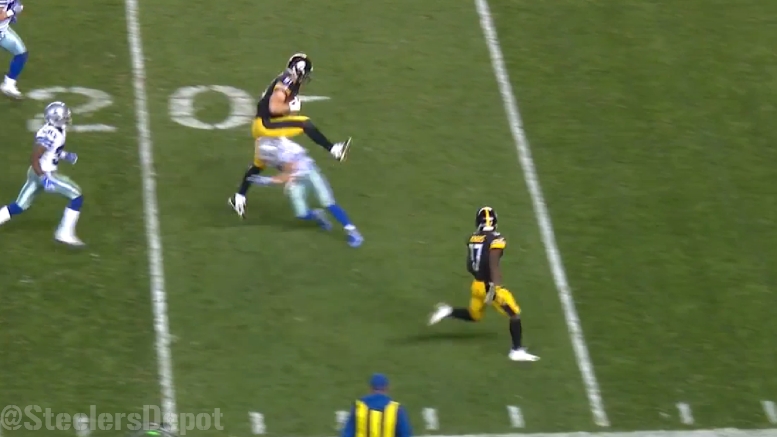 Some of you regular readers on this site are big fans of second-year Pittsburgh Steelers tight end Jesse James, a 2015 fifth-round draft pick and a product of Penn State, who entered the draft a year early and spent the first half of his rookie season last year serving an apprenticeship on the bench. When he did get to play, he did show some good things.

Some of you regular readers on this site are also probably aware that I have been pretty critical of James at times, not just about his blocking ability, but also his seeming inability to gain yards after contact, which is a crucial component of the big-bodied-but-not-athletic tight end mould. If you can’t move the pile, you can’t move the chains.

I suspect that there is a large crossover here between group one and group two, and that that cross-section has not been overly pleased with me for my criticism. But that is not why I chose to write about this. Instead, I simply want to give James some credit where it is due. He did a nice job of picking up yards not just after the catch, but after contact.

It didn’t look like it would start out that way after he caught a pass for about seven yards and picked up one additional yard on the first play of the game. But then later in the first quarter, following a 22-yard gain that moved the offense into Dallas territory, Ben Roethlisberger hit James on the RPO, which briefly froze the safety just enough for James to get up on the short seam.

He bounced through initial contact with the linebacker and was ultimately brought down by three defenders three yards later. This is the kind of catch that merits the “HEEEEEEAAAATH” chants. I want to see more of this out of him going forward.

I do also want to pause and point out one running play, albeit one that wasn’t even spectacular. I have been critical of James’ work as a move blocker, but he did well on a late third quarter run block, sweeping left across the formation. He just gave a nudge to the initial linebacker to get the back beyond him, then worked upfield to hit on another block. If there was a little more urgency on this run, maybe it goes for more.

Midway through the fourth quarter, the Steelers were looking to get the lead back, standing at the 11-yard line. Roethlisberger fired a quick-hitter to James, who was able to get in an extra yard or so from the point of the tackle. Would I have liked to have seen him get into the end zone here? Sure, but I’ll take this.

Of course, his big YAc reception came late in the game with just over a minute to play. The offense showed a screen look that they had been showing throughout the game, which helped open up James for a wheel route, making the reception about 10 yards beyond the line of scrimmage. He actually hurdled over the first tackler for extra yardage, though he did get his leg caught and was brought down soon after.

As I have pointed out several times, James was averaging a little over seven yards per reception entering this game, which is abysmal and shows that he wasn’t getting anything done after his catches. On Sunday, he showed that he can fight for the extra yardage. I don’t know if he suddenly has any added motivation to keep his place in the lineup, but if that is the case, then it’s a good thing. Whatever works.